The highpoint of the Eureka Dunes rises about 700 feet from the base of the dunes. Hikers in good shape will want to give themselves at least an hour to get to the top, and finding the way is easy—climb the steep slopes until you reach a ridgeline, where the added stability will give you better footing, and keep following the ridgelines until you reach the top. Then enjoy the awesome desert wilderness all around you.

The Eureka Dunes are also known as “singing dunes”—at certain times, the wind blows the sand in a way such that it makes a whistling sound similar to a high-pitched tune. I have never been lucky enough to hear it, which may be excuse enough to justify going back.

These dunes, like all others, are wonderful at dawn and sunset. They take on a deep golden glow, and the curves, shadows, and striations on the sands will make amateur and pro photographers alike go trigger-happy. 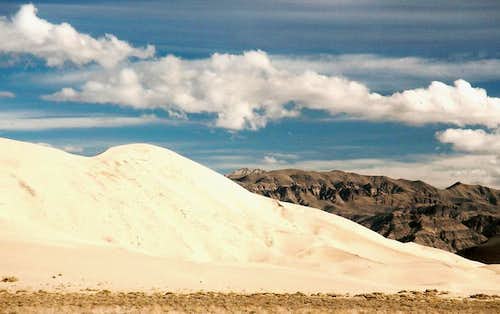 Near the parking area 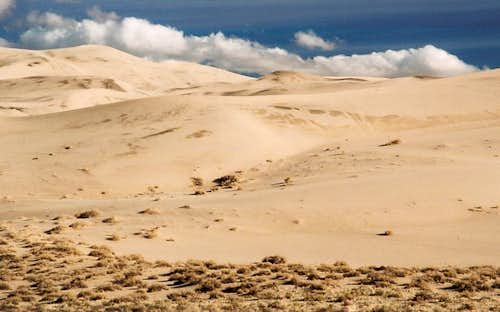 Start of the hike to the top 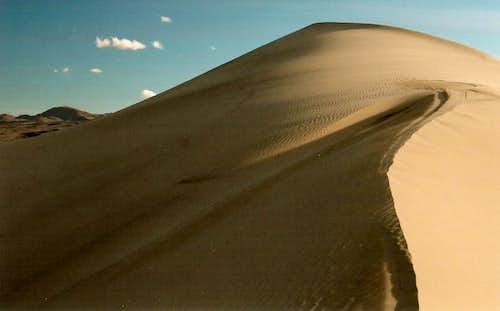 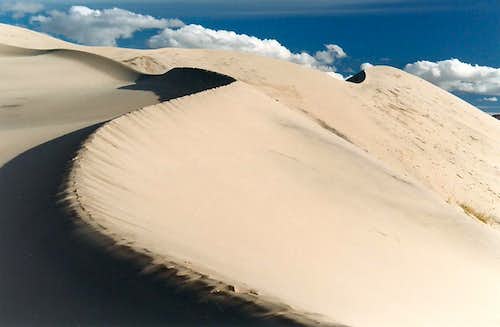 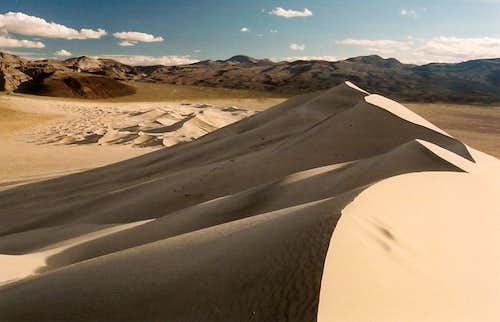 South from the top 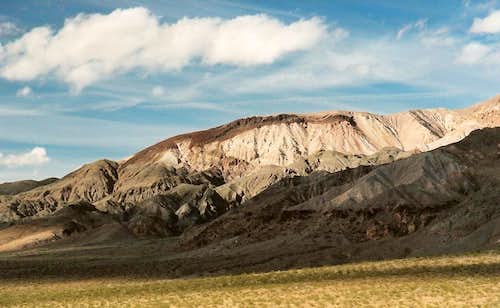 Last Chance Mountain
There are two primary ways to approach the road into Eureka Valley. From Big Pine to the west, follow Big Pine Road (it heads east just north of town) for 38 miles until you reach the intersection with the Eureka Valley road. Up to this point, the road is paved most of the way and is easily passable to passenger cars. It is also a very pretty trip through some canyons and a large Joshua Tree forest. Stop and look back west for fine views of the unforgettable face of the eastern Sierra Nevada.

From Grapevine in Death Valley, turn west toward Ubehebe Crater and Racetrack Road (go to both if you have time) and, after almost three miles, turn right onto a well-maintained gravel road. Although subject to some washboard spots, this is a good road, and you follow it for 35 miles to the Eureka Valley road. Avoid the right turn onto a 4WD road at Crankshaft Junction.

Follow the Eureka Valley road south for ten miles until you see a large parking area on the north side of the dunes, which will have been clearly visible for most of this stretch of driving. Park here unless you have a 4WD vehicle. Maps recommend high clearance for the drive down to the dunes, but most passenger cars can make the trip with little trouble. Just remember to have a good spare tire or two and plenty of gas—help is far away and expensive out here. Check your water, snacks, and film, and then cross the sagebrush flats to begin climbing. There may be several other cars and people out here, but it’s unlikely to be truly crowded except maybe on a gorgeous spring weekend when lots of people are out of school.

Another, more rugged approach is via Steele Pass from Saline Valley, where there are low sand dunes at the base of the Inyo Mountains. Maps indicate that this approach involves deep sand in places and requires experienced 4-wheel drivers. I drove through the sandy areas in a stock Explorer 4WD in 2003 and had no trouble, but I didn’t try Steele Pass since there had been heavy rain (for Death Valley) and snow the day before, and some higher roads were supposedly difficult or impassable as a result. SP member Steve Larson reports that negotiating Steele Pass requires a narrow vehicle with a short wheelbase and lots of ground clearance.

Endemic and Endangered
It costs $20 for a week-long permit to enter the national park. There are no entrance stations, so you are on your honor to go to a visitor center and pay the fee. This is impractical to do if you enter from Big Pine, but truly honorable people will write a check and a note and send them to the park headquarters. There is no other special red tape—do be aware that vehicles are prohibited on the dunes, though.

Avoid this area in summer. The heat can be around 120 Fahrenheit, and heatstroke and heat exhaustion are real threats. Early spring and late fall are the best, but winter would be nice if slightly chilly—snowstorms could occasionally prevent access from Big Pine, though, as the road crosses through the northern end of the Inyo Mountains on the way to the lower elevations.

Take care of the environment here. It is a fragile place, and the plants are especially so. One primrose species, pictured here, grows only at the Eureka Dunes and is also considered endangered.

One of the great things about Death Valley is that you can camp almost anywhere as long as you’re out of sight of a paved road. Burning the little wood in the area is a bad idea, though, and ground fires of any kind are likely to leave unsightly scars.

From Steve Larson, November 2010: "There are several officially sanctioned camp sites near the Dunes. These are marked on a map at the intersection of Eureka Valley Road and Death Valley Road/Big Pine Road (not sure what it's called at that point), and also when you reach the dunes. The first one you come to has four concrete picnic tables and fire rings. There is also a pit toilet, but it isn't stocked with TP, so bring your own. The other camp sites are just spots off the road that have been marked around the perimeter with small rocks. They don't have tables or fire rings, so the first four are the only place you can legally have a fire. 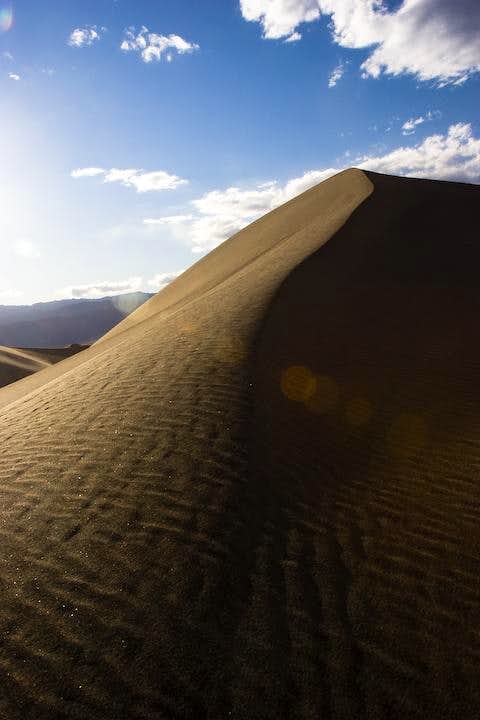 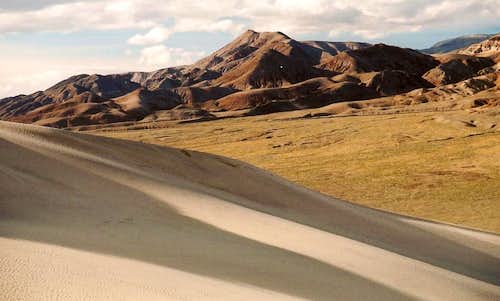 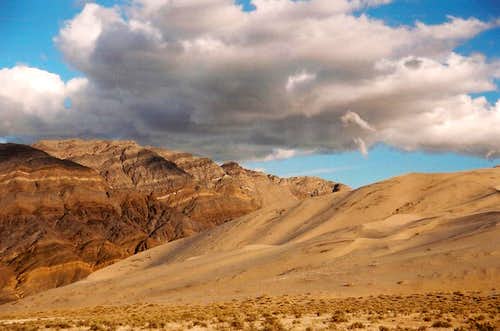 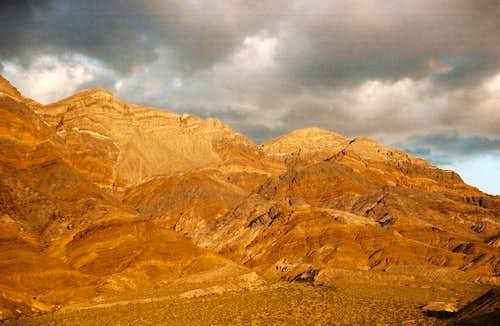 Judy is terrified of long steep dropoffs off the side of roads and thus cant go to Eureka via the route from Ubehebe. Just want to confirm that the route from Big Pine has no such dropoffs, and a rented 4WD SUV can make the trip. [May also drive from Beatty; anyone know the distance? Thanks.

Re: Route from Big Pine

I don't know the distance from Beatty, but the route from Big Pine is fine. Honestly, there are no instances of long, steep dropoffs as I think of them along the road from Ubehebe. The road does for a time wind up and down a pass, but it isn't scary. You might get more feedback on this forum: http://www.death-valley.net/forum/.

Best time to visit the dunes is in late afternoon, when the sunset highlights the colored bands on the cliffs to east.