Corkscrew Peak is a towering sentinel of the Grapevine Mountains of northern Death Valley National Park. When looking northeasterly toward the mountains from Stovepipe Wells, one sees Corkscrew Peak as an oddly shaped mountain that draws his or her attention. Although it is not close to being the highpoint of its range (several peaks are higher, and the highest has more than 2000' on it), it is definitely one of the most commanding and recognizable due to its form and its position.
Often climbed, this mountain is a worthy adversary for those coming in search of a good time in the mountains. Rugged canyons and cliffs, an interesting assortment of weird desert plants, and the occasional critter are just a portion of the Death Valley backcountry experience. Corkscrew Peak offers all that. Many consider this peak to be a desert classic because of the pleasant route, the great views, and the interesting features along the way. High on the ridges, one gets a real sense of isolation and wilderness. Time it right and you'll also enjoy a nice display of spring wildflowers.

Although the summit has awesome views, it isn't a terribly exciting feature. However, just a stone's throw away is a small, exposed outcrop. A quick Class 4 scramble gets you atop this airy perch, and it is well worth the extra couple of minutes.
The easier route of the two most commonly used involves about 7.5 miles (RT) of cross-country travel and about 3300 feet of gain. The routes, though fun and worthwhile, never need to exceed Class 2.

Corkscrew Peak can also be linked up with nearby Death Valley Buttes for a kick-ass day.
Or, do Corkscrew early and then head out on the one-way Titus Canyon Road, stopping along the way to go up Thimble Peak from Red Pass via the northeast ridge. Doing this, you'll hit what are arguably the two most spectacular peaks in the Grapevines, and you'll also pass a ghost town and petroglyphs before driving through some cool narrows. A high-clearance vehicle is recommend for this outing. 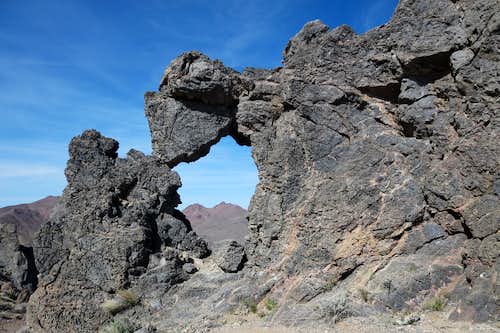 The Hole in the Rock

From Beatty, NV (100 miles or so north of Las Vegas on Highway 95): From the one stop sign on the main drag in this small town, head west straight toward Death Valley (there's adequate signage pointing the way). Follow this road for several (maybe 10?) miles until you cross over the border to California, at which time the road becomes Highway 374. Once on the California side, the highway starts to wind up into the Grapevine Mountains and soon crosses over signed Daylight Pass. A few miles after Daylight Pass, look for a sign on the right side of the road labeled and pointing to Corkscrew Peak. If you come to an unstaffed self-pay entrance station at a location called Hell's Gate, turn around...you've gone too far.
Park by the sign (room for 2-3 cars) or head just up or down the road and find a wider shoulder on which to park.

From MoapaPk: "From the stop sign [in Beatty], it is 19 miles on the paved road to the point where one hits the trail. However, the highway shoulders are quite narrow there, so you might wish to park at ~18.7 or 18.8 miles on the wide right (NW) shoulder, then walk down the road 0.2-0.3 miles to start the hike."

From Death Valley: From the Stovepipe Wells area of Death Valley, follow Highway 190 eastward toward Furnace Creek. Past Mesquite Flat, turn left onto the well-signed road for Scotty's Castle and Beatty, and then turn right almost right away onto the road to Beatty. After Hell's Gate, start looking for the aforementioned sign identifying Corkscrew Peak. If you are coming from the Furnace Creek area, turn right onto the Beatty Cutoff not far past the Salt Creek turnoff. Drive this steep, winding road to its intersection with the road to Beatty and turn right. Soon, you will reach the Corkscrew Peak sign.
If you are coming from the Furnace Creek area, use the Beatty Cutoff to reach Daylight Pass Road. the sign is just a few miles east of that intersection.
The sign is an easy marker to find, but there is actually a better place to park. A short distance west of the sign is another sign, this one informing travelers of a kiosk ahead where one is supposed to stop and pay the park fee. Park in the turnout by this sign and notice a use trail. It starts one out a little closer to Corkscrew Peak and makes the route a little more direct. 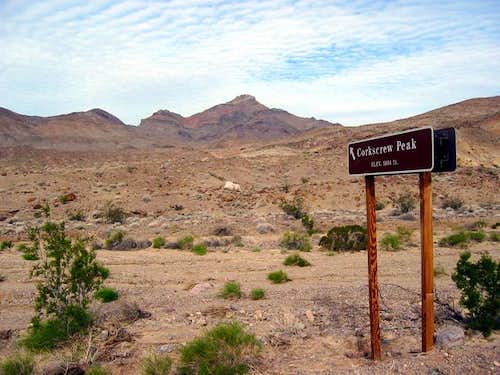 People seem to use of one of two routes to the summit-- "wash route" (classic DPS route) or "ridge route" (seems to be the more-used one now). Both intersect about half a mile from the summit. These routes are both 7-8 miles RT and have around 3300' of elevation gain.
To help confuse things, there seem to be two approaches to the ridge route. The pictures below show the wash route as well as the variations on the ridge route. The variation shown on the right-hand map is easier to find and follow.

The first is sometimes called the "Ridge Route." It is the easier of the two and is Class 1 and 2 all the way. One must work cross-country northwest to a wash (look for cairns)and then follow it north, keeping east of Corkscrew and its ridges, into a narrowing canyon. In the canyon, find a cairned route on the left leading up and out. A well-worn use trail leads all the way to the summit from here. This route has great scenery because much of it follows the crest of a ridge.
No more description of the route than that is really necessary, though anyone is free to put up a detailed route page if he or she wishes.
The Ridge Route seems to get more use these days, but I have inferred from other sources that the other route is (or was) the traditional one.

The second, sometimes called the "Wash Route" or the "Canyon Route," is slightly shorter and is more rugged, but it can be kept to Class 2. You might come across logs and trip reports here and elsewhere describing the route as Class 3 or 4, but that is because those people climbed one or more of the dryfalls along the route instead of finding easier workarounds.
Head a bit further west than you would for the first route (or just strike out cross-country) until you are in a broad wash southeast of the peak and directly east of its south ridge. At the first significant fork, bear left. At the next one, bear right. Continue up the narrowing canyon and ascend to a saddle southeast of the summit and about 800-1000 vertical feet below it. Here, the route meets the worn trail of the Ridge Route, and the rest of the way is obvious and steep but technically easy.
Cairns in the canyon will sometimes help you steer the way but really aren't needed. As I mentioned before, there are a few dry waterfalls. The first is the hardest, and I would call it Class 4 (but only about 12' high), but it is bypassed via steep slopes to the right; gain these slopes from just outside where the canyon suddenly and dramatically narrows to reach the dryfall.
For the other waterfalls, just find the best way around. Options abound.

Spring through fall. Death Valley is the hottest place in the world, with summer daytime highs often exceeding 120 F. On such a day, the summit of Corkscrew will still be around 100, and the area around the trailhead will be around 110. Unless you start out very early and are very fast, you are taking serious risks with heat exhaustion and heatstroke in such conditions. October through April are really the best months.

There are established camping areas in the valley itself, the largest and best developed being those at Furnace Creek and Stovepipe Wells.  During certain times of the year, youc an reserve sites at Furnace Creek. See recreation.gov for more details and to make reservations.
Backcountry camping is free and allowed without a permit. To be certain, though, since regulations do sometimes change, contact the park and ask, or check the backcountry camping page on the park website.

Death Valley weather. Obviously, mountain weather can be significantly different from that in the valley.