Forget Me Not Mountain

Forget Me Not Mountain is a very apt name for this mountain.  It works on two levels.  First, Forget-Me-Not flowers do actually bloom on this mountain.  Second, it is one of the ranked peaks in Montana above 12,000 feet but isn't labeled on many maps so it's one you "don't want to forget".  If that were not enough, it also goes by the name Drop Off Mountain which is another very descriptive name just as appropriate. 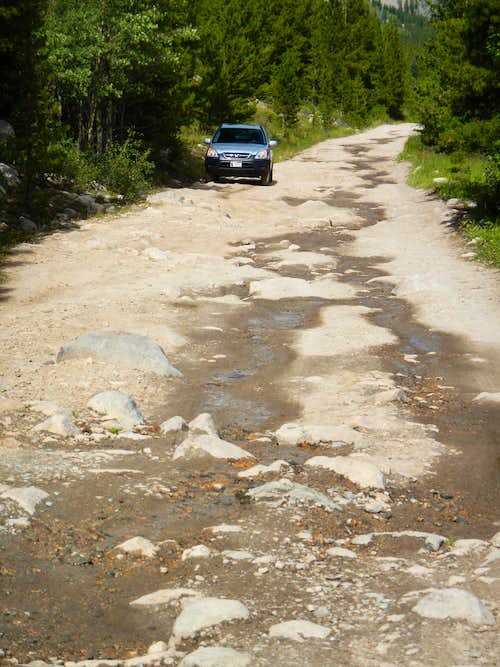 Get to the standard approach via the Glacier Lake Trail Head at the end of the Main Fork Rock Creek road.  This road has a crux about half way up where it seems to become a stream bed after strong storms.  I have seen many passenger cars make it up this road, but it helps to know when you've past the worst of it.

The simplest way to climb this mountain is to just add it on to a climb of Spirit Mountain.  It's a simple talus decent of about 500 feet from there and then about 200 feet up a very moderate permanent snow field that is a good place to restock on water.

Another interesting approach would be to gain the southeast to northwest Beartooth plateau ridge from one of the Beartooth Highway switchbacks and day hike all the way.  I wouldn't attempt it until after July 15th.  I used a mapping tool to peg the distance as 8.2 miles one way.  You'd probably want to add another side trip to Spirit but I think the whole route being under 20 miles makes it feasible.  The idea for this came from a friend who did a variation leaving from the Island Lake trail head and then veering over to the plateau towards Heart Lake. 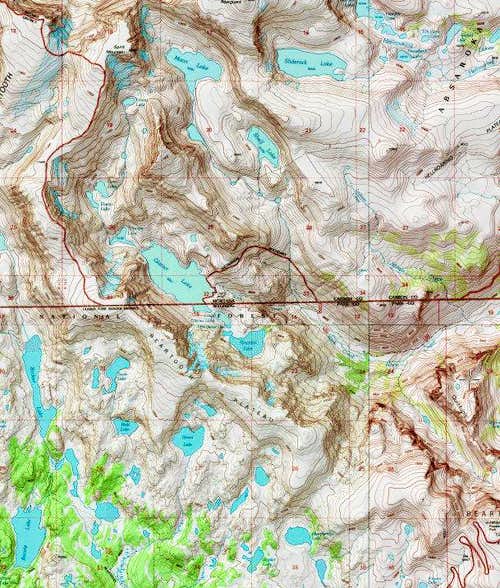 I came up with idea for this as I was planning my trip and then the cool name while I was designing this page.  For me, it was too time-consuming to fit safely in a day, but I challenge someone to do it. Basically you climb from Moon Lake base camp to Spirit, then Forget Me Not, but then continue along the ridge to Avalanche (unranked 12000 sub-peak) and on over to Beartooth Mountain. It's only 4.5 miles one way, but the crux seems to be what Matt thinks is 4th or 5th class on horrible rock on the down climb to the saddle before Avalanche. 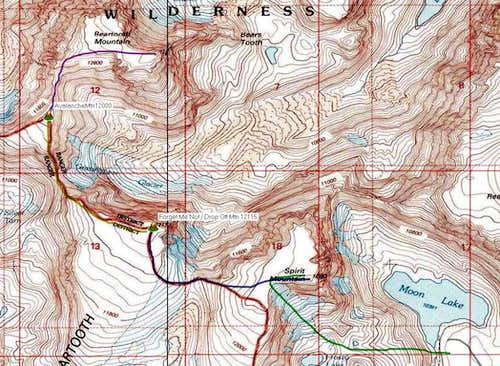 I have no idea if there has ever been an ascent nor if the rock quality would make it worthy of one.  See the Beartooth Mountain page for the approach up Black Canyon.  Of course you could also climb the left hand snow field from this side.  This is mentioned on the Spirit Mountain route map. 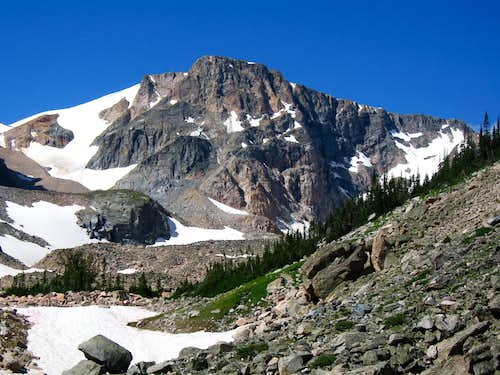 Camping is allowed anywhere within the Absaroka-Beartooth Wilderness. You are "requested" to check in with the Beartooth Ranger Station in Red Lodge or call (406) 446-2103 before camping in the back-country (although most people do not bother). You must have a permit to cut live trees for firewood. There are several campgrounds along the first paved, then graveled road leading up the Rock Creek drainage. The last official campground (M-K) is four miles from the highway, but additional good dispersed camping spots can be found along the deteriorating road to and including the trailhead.

July and August are the best months to climb in the Beartooths although the short approach via Spirit Mountain would probably make shoulder season climbs more realistic for this one.