Castle Mountain is the 4th highest mountain in Montana, behind Granite, Granite West and Wood. With an elevation of 12,612 feet, and many interesting features on its rugged east face, the mountain's appearance reflects it's title as a castle when viewed from the approach along the West Fork of Rock Creek. The most common route is a fairly straightforward route involving a small amount of Class 2 scrambling. The most popular, and likely the best approach for the mountain is via the West Fork of the Rock Creek which offers the shortest approach. Average parties will take two days car to car to make this ascent, however, with nearby peaks like Whitetail and Silver Run it's worth spending longer to really explore the area.

In addition to the standard hiking route, Castle Mountain's east face offers two steep couloirs for more technical climbing. On the far right side of the face you can find the Northeast Couloir route, which reaches a maximum snow steepness of about 48 degrees, and a fairly sizable bergschrund is found partway up. Later in the season this wide couloir turns pretty icy so take note. A little further left towards the center of the face, the steeper, narrower East Couloir bisects its way right up the middle of the east face, and reaches close to 60 degrees in steepness. Later in the season, this couloir dries out entirely and is no longer a good ascent option. See the photo to the right in the table below for a view of these two couloirs.

WEST FORK of the ROCK CREEK TRAILHEAD
From the south side of Red Lodge Montana, turn West off of Highway 212 and follow the road heading WSW across the plain and into the Rock Creek Valley. Follow the valley for 15-16 miles to the end of the road. This is the Trailhead leading up the West Fork of Rock Creek. The Rock Creek valley is popular for fishing, and several good camping areas can be found along the road leading from Red Lodge to the trailhead. From the trailhead, follow the path leading along the North side of the West Fork. After 7.5 miles you will reach tree line and an established bridge across to the South side of Rock Creek. Once you reach the bridge there are several good flat grassy areas to set up base camp. Such areas include Sundance Lake, Shadow Lake, or the Silt Lakes

LAKE FORK TRAILHEAD
From the south side of Red Lodge, Montana, follow highway 212 South for approximately 11 miles. Before passing Black Pyramid Mountain, turn right onto the well-maintained road which leads past several cabins and into the Lake Fork Valley. Follow this road for 2 miles to the trailhead. A footbridge crosses Lake Fork Creek just beyond the end of the road to join the trail on the Creek's south side. This trail follows the Lake Fork, passing by September Morn Lake near treeline after 8.0 miles. Sundance pass is another 2.0 miles from September Morn Lake. Cross over the switchbacks and set up base camp on the other side near any of the four lakes.

EAST ROSEBUD TRAILHEAD
This route is not as popular as the rest because it is more physically enduring to reach the spire due to climbing the Sundance Glacier.

Once you reach Shadow Lake, set up camp here, or continue to the Silt Lakes for base camp. The climb round trip from camp can take upwards to 12 hours so start early. Start by hiking to Omega Lake and hike up the snowfield to the saddle. Crampons and ice axe are a good idea, or you can go around the glacier on the rocks to the right, but it will probably take a bit longer. Once at the crest of Omega Pass, the views to the south will really open up! Descend about 50 feet or so and veer right and around the ridgeline. Traverse down and over to the snow that is in the valley bottom, and hike north straight up this snow finger.

You can also lose less elevation and skirt above to the right. This valley extending south from the summit of Castle Mountain is pretty open and many routes are possible here. None should exceed Class 2. The final bit to the true summit is over the flat summit plateau, with the highest point on the far northern end. It's actually quite a ways over and you'll know you've gotten there when you see the elevation marker in a rock. You can be very exposed to the elements so start early and beware of the typical afternoon storms that roll in from Pilot Peak direction (southwest). You can't easily see what the weather looks like until you reach Omega Pass. 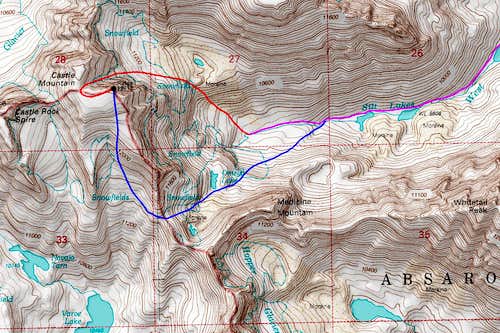 Camping is allowed anywhere within the Absaroka-Beartooth Wilderness. You are "requested" to check in with the Beartooth Ranger Station in Red Lodge or call (406) 446-2103 before camping (although most people do not bother). You must have a permit to cut live trees for firewood.

Most parties choose to climb Castle Mountain in two days, camping on either NW side of Sundass Pass in the bottom of the West Rock Creek valley or the SE side near September Morn Lake. If you camp along the West Fork Rock Creek side you have several areas to camp. There are many flat grassy areas near Shadow Lake, Sundance Lake, or the Silt Lakes. Remember, Leave No Trace, and as always in bear country, hang your food well away from camp at night.

Castle Mountain is located in the Absaroka-Beartooth Wilderness, Custer National Forest, Beartooth Ranger District. No fees are required to climb or camp. You are "requested" to check in with the Beartooth Ranger Station in Red Lodge or call (406) 446-2103 before climbing or camping (although most people do not bother). You must have a permit to cut live trees for firewood. No mechanized vehicles are allowed in the wilderness area.

My Trip Report for the NE Couloir Route