Sundance Mountain is another one of the 26 ranked (300P) 12,000 foot peaks in Montana. Located just south of Bowback Mountain, the traverse between the two peaks makes for a nice but long day climb in some of the most unspoiled terrain in all the lower 48 states! Sundance Mountain is characterized by a large summit plateau, typical of many Beartooth summits flanked by steep slopes on all sides offering a variety of routes from moderate snow climbs to a simple talus hike. With the summit plateau being about a square kilometer, it can be a harsh place to be during a storm. Treat this peak with respect despite its relatively easy ascents.

If one were to guess, the mountain was likely named Sundance Mountain due to the fact you can see it very well from Sundance Pass located across the valley to the east. The mountains' lower eastern, but more rugged summit is the most prominent feature you see from the West Fork Trail and this sub-summit towers above Shadow Lake making the lake stand in the shadows from early afternoon onwards through the remainder of each day. This is likely why Shadow Lake is named so. Despite this effect, Shadow Lake offers absolutely stunning camping and makes a great place to stage multiple climbs in the area like Castle Mountain, and Whitetail Peak in addition to Sundance Mountain.

Sundance Mountain is best climbed from Shadow Lake. This little lake is one of my favorite places in the Beartooth Mountains and great camping is found on the lakes' north side. You must get to the West Fork Rock Creek trailhead located just outside Red Lodge, Montana. From the center of Red Lodge at the MT 308 and US 212 junction, head west 0.3 miles on US 212 and turn right onto the West Fork Road with signs for the Red Lodge ski area and measure distances from this turnoff. The road immediately comes to a Y, stay left and head up the paved road passing the Palisades Campground Road (gravel) on the right after 1.1 miles. Continue and enter the Custer National Forest after 2.8 miles and turn left to stay on the West Fork Road at 2.9 miles. Taking a right at this turnoff takes you to the ski area. Pass the winter closure gate at 5.2 miles, the Basin Lake Campground at 7.2 miles and the road turns to gravel at 7.4 miles. At mile 10.5, pass the Cascade Campground and reach the trailhead at mile 13 with an elevation of 7,890 feet. Here there is room for about 40 cars and 7 horse trailers and a pit toilet is available. 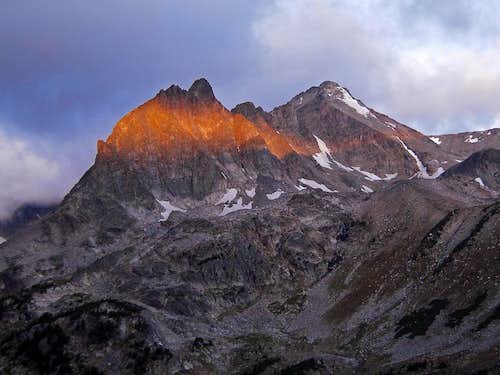 From the West Fork Rock Creek trailhead, start up the trail and take an immediate left with a sign for Quinnebaugh Meadows and Sundance Lake. Follow this trail for two miles through a burn area and reach the small Sentinel Falls at 8,400 feet just past a couple switchbacks. Continue up the more forested trail another 2.2 miles to Quinnebaugh Meadow and the junction with the Lake Mary Trail. The meadow offers fantastic camping and the first views of Whitetail Peak. Continue straight and cross the stream draining Lake Mary on a series of small logs or rocks and reach the first culvert bridge 0.6 mile past the Lake Mary junction at 8,950 feet. At this bridge a short boot path heads up this side drainage towards Senal and Dude Lakes. From here, continue up the flat and well groomed trail for 1.2 miles to a second culvert bridge that crosses Kookoo creek which drains Kookoo Lake. Beyond this point the trail steepens for the next 1.6 miles and climbs 500 feet over a series of switchbacks to a very nice footbridge crossing the West Fork Rock Creek to its SW side.

Continue up the main valley without crossing the footbridge on the creeks NW side over talus and grass for 0.4 mile to Shadow Lake. Some of the best campsites around can be found at Shadow Lake on its north side at 9,600 feet and this makes a great base camp for any of the north or east facing snow climbs on the peaks surrounding the head of the valley. The scenery in this area is stunning and the Whitetail couloir dominates your view to the south. The marmots at Shadow Lake can be aggressive early in the season.

Use the West Fork Rock Creek Approach and camp at Shadow Lake. From the lake, continue up the valley following as close as possible to the main creek. Do not be tempted to climb a hundred feet above the lake as this will lead you into some annoying bushwhacking. The tower dominating the view to the west is the eastern, lower summit of Sundance Mountain. The route heads up the valley around this tower. Stay on the north side of the creek and walk on grass and talus for 0.9 miles to the lower Silt Lake. There are as many as 10 small stream crossings from Shadow Lake to the Silt Lakes. A faint trail can often be found making the hiking easier.

From Lower Silt Lake continue on talus 0.2 mile to the west (upper) end up Upper Silt Lake and locate a prominent gully to the north. Turn right and begin climbing talus up this gully at 9,850 feet being careful on these rocks as this is an avalanche chute in the winter so many rocks may be loose. You may find more solid rock on a small ridge just above and to the west of the large gully. Angle left (west) and hit the base of a cliff band at 10,800 feet and continue traversing west until some breaks in the cliff band. Weave through the cliffs up class 2+ chimneys and ledges exiting the cliff band at 11,050 feet. Continue northwest on talus to the base of the summit area cliffs at 11,850 feet. Stay to the left (west) of all the towers and do an ascending traverse to the west around the cliffs. Follow the base as the cliffs curve back to the right (north) and scramble up talus and ledges to the summit plateau. You may see cairns in this area. Follow the plateau 0.15 mile to the high point at the eastern edge. Keep in mind where you hit the summit plateau as it is easy to get disoriented. Descend the ascent route being careful not to stray too far the west on the initial descent from the plateau down a steep loose couloir. Stay close to the summit cliffs.

Use the West Fork Rock Creek Approach and set up camp at Shadow Lake at 9,600 feet. There are some very nice grassy areas to pitch a tent near the upper part of the lake. From the lake, climb west on grass and talus on the north side of a stream which drains into Shadow Lake. There is some bushwhacking above the lake for a couple hundred feet. After 0.3 mile, the stream diverges. Continue following the right (north) stream for another 0.5 mile up loose talus to a flat area with a small tarn at 10,500 feet. From the tarn, angle to the left and climb to a small ridge just to the south of the tarn and follow the rocky right west aiming for the large snowfield on the NE slopes of Sundance Mountain. Early in the season in June, this whole area will be snow covered but by mid-July, the northeast slopes snowfield can easily be identified. Reach the start of the snowfield around 10,750 feet and climb southwest on 35-40 degree snow for 1,500 feet directly to the summit. Aim for the right edge of the snow for less exposed climbing and to gain the summit plateau. Later in the season there may be some rock exposed to gain the summit plateau that will require some class 2+ scrambling. 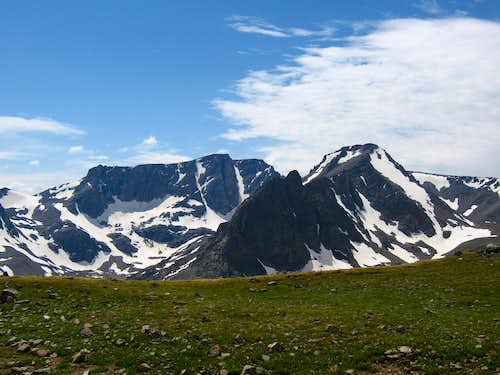 View of the NE slopes on Sundance Mountain

This is a fun way to combine both Bowback and Sundance Mountains. It is a very long day no matter where you start. The traverse can be done in either direction however if the key gully is snow filled it may be better north to south. One possible but very long way would be to camp at Quinnebaugh Meadow and hike 3.8 miles to Shadow Lake, climb the northeast slopes route on Sundance and traverse to Bowback while descending the north ridge. It would be a challenge to bring heavy packs up to Kookoo Lake so starting here probably wouldn’t be feasible, unless you go ultra-light. I'll describe the route from south to north.

From the summit of Sundance Mountain, walk the easy summit plateau for 0.3 mile west as it narrows and begins a broad turn to the right (north). Along this curve, bypass below some towers on the left (south) side of the narrow ridge (Class 2). The terrain eases again and becomes a very wide open plateau. Continue north, then northeast on staying as close as possible to the steeper slopes to the east leading down to Marker and Ship Lakes. Contour just east of Point 12,030 and reach the end of easy terrain at the top of a northeast facing loose gully (may be snow filled with 40 degree snow well into July). Finding this gully is the key to attaining the 11,700 foot saddle. Descend this gully for 200 feet, exit it to the left and traverse across the base of some cliffs on their west side and hit a notch. From this notch, the saddle can be seen. Descend 100 feet on easy talus to the saddle and continue on the south ridge route of Bowback Mountain route. 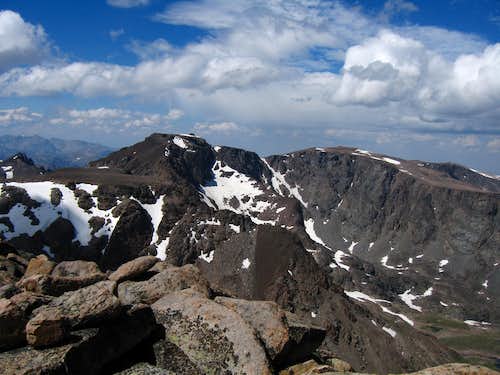 View of the traverse to Bowback Mountain from Sundance Mountain 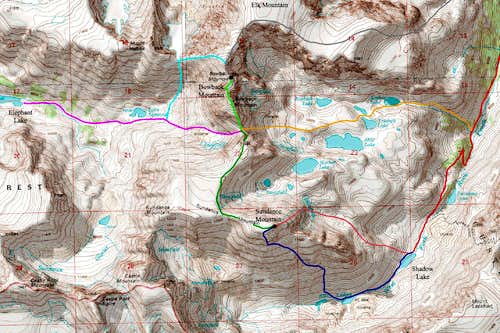 GREY: Approach 1; Variant 1 up Dude Creek and up the North Ridge of Bowback

There is great camping at the Quinnebaugh Meadows right around the Lake Mary trail junction. The best camping would be at Shadow Lake. Camping is also available at many places along the West Fork Road. This area is within the Abasorka-Beartooth Wilderness therefore no motorized travel, including but not limited to, cars, motorcycles, bicycles, hang gliders, airplanes, scooters, etc... is allowed.


There is a ranger office right at the junction of US Highway 212 and the West Fork Road at the southern end of Red Lodge.

For a weather forecast for the peak, see THIS page