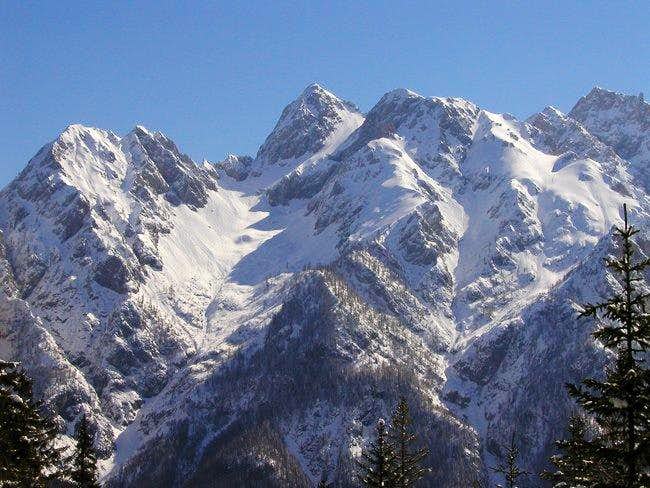 From north, Martuljek group looks like a broad, slightly curved crest of wild, rugged peaks. This range starts on NE with Vrtaski vrh, 1898m, continues towards W-SW over Sleme, 2077m and reaches the sharp Kukova spica, 2427m, with which a beautiful half circle of high mountains starts. Skrnatarica, 2448m, Dovski kriz, 2542m, Veliki Oltar, 2621m and from this one in a NW direction Velika Ponca, 2602m, Mala Ponca, 2502m, Spik, 2472m, Frdamane Police, 2284m, Rusica, 2074m. In front of this ridge leads a very hard approachable mountain called Siroka pec. It is nice seen with its steep N face from Gozd Martuljek.

Frdamane police is an average mountain in Martuljek group about the difficulty of approach. A normal route is ascent of UIAA I and it is not very hard for good climber. For the ascent over normal route you must come to called valley Krnica and start ascent in this valley from west side.

Frdamane police has a beautiful north face, which is one of the hardest faces in Slovenia. But a lot of people which are driving in Sava valley and from village Gozd Martuljek are watching Martuljek group from the north they don’t see Frdamane police because the most attractive is Spik and its famous north face.

The north face of Frdamane police is very steep and has problems in all face from foothills to the top. A rock in face is solid and it won’t disappoint you. The routes in north face are long, pretentious and very nice. Foreign climbers first climbed the north face of Frdamane police. The most visited and popular route in north face is famous Schinkova route. But in this face the Slovenians have a lot of hard routes. A lot of routes in north face were climbed by the famous world climber Andrej Stremfelj and his brother Marko Stremfelj and Francek Knez (which is well known from hard routes in Drei Zinnen/Tre Cime).

The heart of the region is Kranjska Gora resort town, 84 kilometers from the Slovenian capital Ljubljana. Starting point for Frdamane police is valley Krnica or village Gozd Martuljek. South-west face of western summit, V-, from the top S6.

No limitations but Frdamane police leads in Triglavski Narodni park so you must be kind to the nature and other beauties.

On Frdamane police is the best time for climbing on normal route from May to October.

In north face is the best climbing time when is north face snowless so from July to September. But some routes were climbed in north face also in Winter.

In Winter you can ski in some ravines on west slopes of Frdamane police.

In Krnica valley is not far away Koca v Krnici (hut).