A Winter Adventure in July 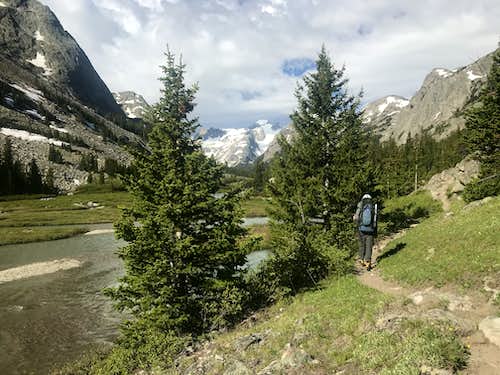 As a state highpointer, I have always had Gannett Peak on my list, but pushed it back because the remoteness involves time I didn't have (almost a week's commitment, including travel) and technical climbing that requires advanced planning and use of a guide.  In other words, it wasn't a one-day hike I could squeeze into a family vacation or business travel on the spur of the moment like Whitney or Elbert.  With more time available, I decided this year to climb Gannett with my daughter and her boyfirend over the Fourth of July week.  Based on internet research, I decided my best option was to hike the Cold Springs Trail using Montana Alpine Guides.  Reaching this trailhead, which is a lesser-used approach from the east, requires a 90-minute pickup truck ride across the Wind River Indian Reservation from the tiny town of Crowheart, Wyoming.  This is an expensive proposition ($270 pp), but worth it because it cut a full day off of the trip, made for an easier summit day (eliminated need to cross Bonnie Pass), and afforded us comparative solitude.  On the latter point, we saw only about a dozen other climbers in during our-four day trip despite climbing during what should have been a busy summer holiday week.

Because of the Gannett's remoteness and glaciation, all but very experienced climbers should hire a guide.  The Cold Springs trail in particular is very difficult to follow in spots.  This was made even more difficult than the normal by the large amounts of snow that blocked the trail in places, owing to the the unusually heavy and late snowfall in the Rockies in 2019.  Our guide was able to identify several nice camping sites on the route that wouldn't have been obvious to us.  Most importantly, the climb on summit day was technical - requiring knowledge of the best routes up Gannett's huge glaciers and glacier travel techniques.  The steepest section of the route, the Gooseneck Coulier, had pitches of 45-50 degrees, where a fall without appropriate protection would have been very serious.  In short, this is not a mountain to fool with.  Climbing it with a guide is expensive, but you can't put a price on safety.

The Cold Springs trail is simply gorgeous.  It starts at about 9500 feet at the edge of a grazing area on the upper reaches of the Wind River Reservation.  The trail rises gradually through meadows and White Bark Pine groves, eventually reaching the aptly named Scenic Pass at about 11,500 feet, where hikers get the first views of the snowcapped Wind River Range.  As you gradually descend across the tundra of Scenic Pass, Gannett Peak comes into view to the hikers left.  It's there that the scale of the climb becomes apparent.  Hikers must descend into the Glacier River drainage, an alpine river valley of stunning beauty, and make a long approach to the base of Gannett, which is situated at the end of a box canyon.  Unlike many other western high points, there is no way to start the Gannett hike at the base of the peak itself.  In fact, our guide said that Gannett isn't even visible from any road in the area.  Reaching the high camp involves an approach of about 15 miles (longer on routes other than Cold Springs), which for most hikers requires two days.  While this may see like a slow pace, it's important to remember that you will be carrying a heavy back, you must cross Scenic Pass (and thus gain and lose 2000 feet of elevation just to reach the Glacier River Valley), and the trail itself is quite rough in spots - with numerous tricky stream crossings.  Depending upon the time of year, certain of these stream crossings my require hikers to take off their boots and wade through icy water across slippery rocks - meaning that carrying a second, light weight pair of shoes is worthwhile.   In most spots, these crossings involve teetering across slippery logs about raging waters - no small feat when carrying a heavy pack.

Summit day itself is a treat.  The climb is steep but travel on the glaciers is easier than the rock-hopping required on the lower mountain. There are a few rocky outcroppings that make for tricky scrambling on crampons, but this was mostly a snow climb for us.  Had we climbed later in the year, or even had it been a more normal winter, we likely would have had more rock to navigate.   An early, "alpine start" is essential, both so that you climb when the slow is firmest and to avoid being caught on the mountain during afternoon thunderstorms.  Be forewarned that the weather grows increasingly unpredicable as you ascend.  We had a brief period of strong winds and accumulating snowfall on our ascent (in early July!), followed later by clearing and a hot sun that softened the snow and made our descent more taxing.  The views from Gannett's summit are spectacular, allowing hikers to take in vistas of the rugged and remote Wind River range that simply aren't available to drivers tranisting Wyoming.  Unfortunately, while the clouds from the earlier snowfall lifted, enough moisture remained that we weren't able to view the Tetons to the northwest. Had we arrived an hour later, we likely would have had enjoyed this view.

One word of caution. The weather can change in a heartbeat.  On our return trip up Scenic Pass, the skies went from clear to black in 30 minutes.  The temperature dropped 20 degrees, and it began sleeting.  We were a long distance in either direction from tree line, so when we heard a rumble of thunder, it was real cause for concern.  Fortunately, the storm passed almost as quickly as it arrived, with no more electrical activity.  On another day, we might not have been so lucky.

Montana Alpine Guides (MAG) advertises the roundtrip via the Cold Springs Trail as 25 miles.  Don't believe them.  We asked our guide to estimate the mileage on his GPS, and he came up at 32 miles, which he felt was likely understated by 10% because he wasn't able to follow all the contours of the trail.  So, 35 miles is more like it.  Whomever is right, MAG or their guide, it felt like every bit of 35 miles to us, and we are experienced hikers.

Another word of caution - this time financial.  You will be hit with fees from all sides.  First, there is the guiding fee, which is not cheap.  If you choose to use a porter to lighten your load, plan on another $220 per day.  We didn't use a porter because he carries only 30 lbs, which for the three of us meant lightening our packs by only 10 lbs a piece.  You also will pay a 3.5% forest service use tax on the guide fees.  Then there is the $270 pp. to cross the reservation.  Finally there is a $75 pp "fishing license" fee you must pay on arrival in Crowheart.  Note that climbers are responsible for paying these per person charges for their guide and any porters. Be careful to ask you guide service in advance for clarity on these fees (who and how to pay) as we inadvertently overpaid for transportantion across the reservation, thinking the charge was $345 pp and not knowing we would pay the license fee separately.  Our guide failed to catch this error and Ramona O'Neal, who runs the transportation concession at the Crowheart store, accepted our overpayment rather than correcting our mistake. When I discovered our error and called Ramona to ask for a refund, she played dumb and ultimately hung up on me.  We are currently working through MAG to recover our funds. Perhaps this was just a misunderstanding, but the whole espisode didn't left a bad good taste in my mouth.

A closing word about MAG.  The failure to catch our overpayment notwithstanding, they did an overall terrific job, from pre-climb planning right through the dropoff back at the Crowheart store.  The food was a highlight.  Not a bit of the freeze dried junk I had expected.  This include everything from drip coffee to pesto to fresh bell peppers to pre-cooked bacon.  We paid some price in terms of extra pack weight but it made the trip far more enjoyable.   Also, I appreciated the fact that MAG uses the Cold Springs approach, which is faster, easier, and less crowded than other trails.