The Winds at our Backs - A ski crossing of the Wind River Range
Wyoming, United States, North America

In late April of 2015 a friend and I skied across the Wind River Range from the Torrey Lake entrance, up over Burro Pass, down into Dinwoody Creek, took in the summit of Gannett, then exited over Bonney Pass and out to Elkhart Park. It was true wilderness experience; we did not see another human for the entire trip. 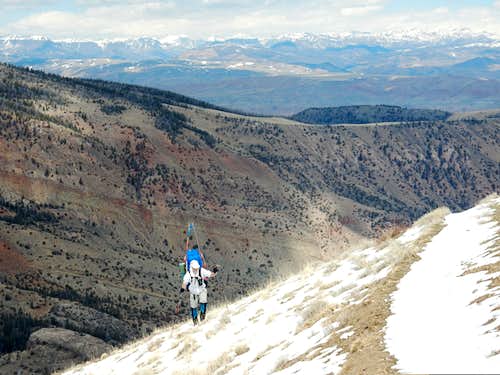 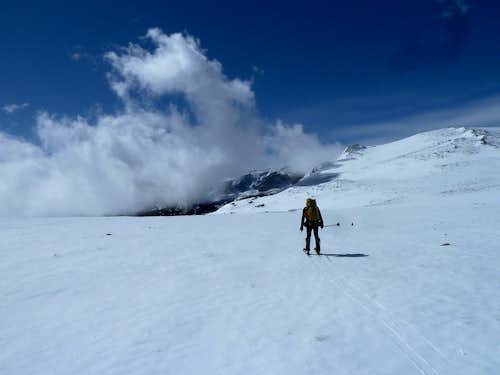 Starting the ski down into Dinwoody from Burro Pass 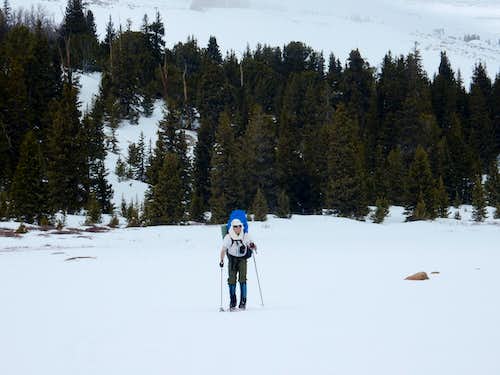 This is partway down from Burro Pass dropping into the Dinwoody valley. This descent proved tricky, as there were quite a few skis-off spots, with bare rocky stretches or trees down. 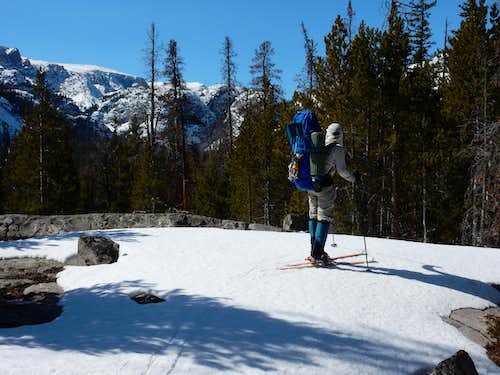 Almost at the bottom, snow was mostly good. We now turned our attention to the many miles of skiing to Gannett. 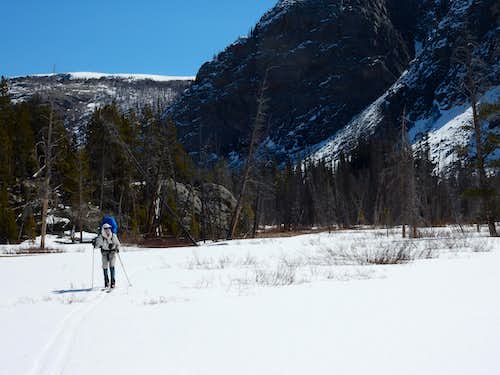 Most of the way we had acceptable snow cover, making for very pleasant travel. 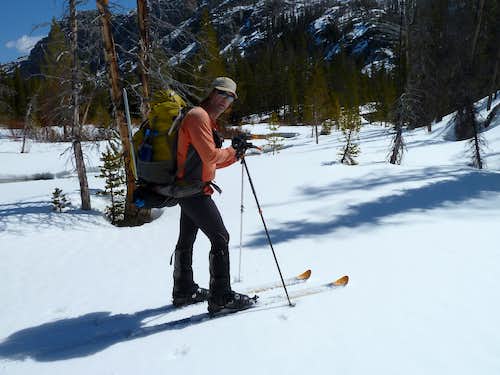 Skiing in the Dinwoody valley. Really, does wilderness travel get any better than this?

The snow drought of 2015 was very evident, the lack of snow in spots on the east side required us to carry the skis almost to Burro Pass,then in quite a few intermittent spots as we worked our way up the Dinwoody. It took 4 days to hike or ski in, with Gannett Peak finally coming into view at the end of day 3; we intentionally set a camp that evening with a great view of the mountain. Day 4 we moved up into the basin directly below the Gooseneck Glacier, finding a perfect rocky alcove in which to set a partly protected camp. 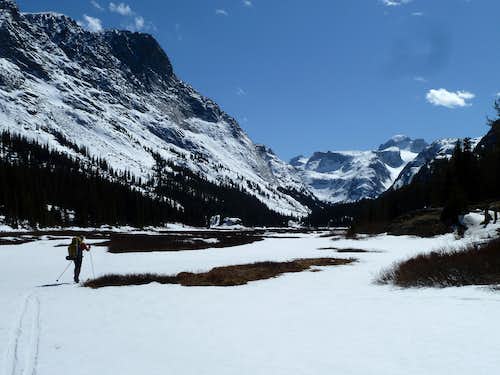 After 3 days, we finally rounded a corner on the Dinwoody to see Gannett 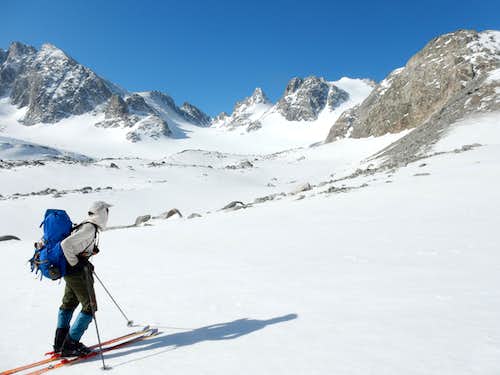 Summit day, weather could not have been better.

We had experienced very changeable weather during the approach, but summit day the weather gods gave us a gift with blue skies and sun. We skied up the Gooseneck Glacier to the start of the steep spot by the Gooseneck tower. I switched to crampons at one steep part on the glacier but regretted that as my friend stayed on skis and buzzed right on up and had to wait for me at the tower. We both got onto crampons at that point. Interestingly, the bergschrund that is so often discussed and photographed on this route was not even visible; the slope up was an easy crampon. Being a bit tired this day, I was very grateful for my energetic friend who kicked solid steps all the way up. 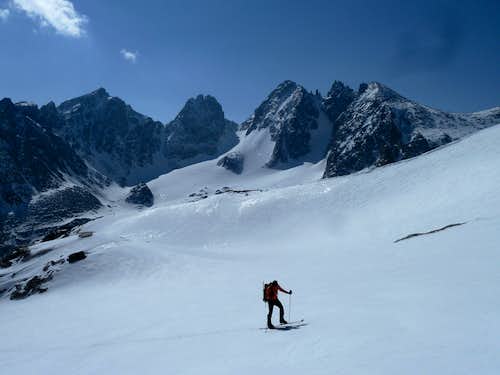 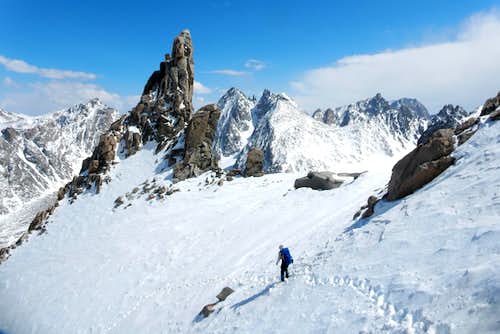 The Gooseneck On Gannett.

We sat on the summit in warm sun. The peaks glowed with that ethereal inner light that happens when sun shines on snow-covered mountains. Surrounding us in the far distance were clouds and snowfall, but we had this hole of open blue sky just over our part of the range. Perfect. 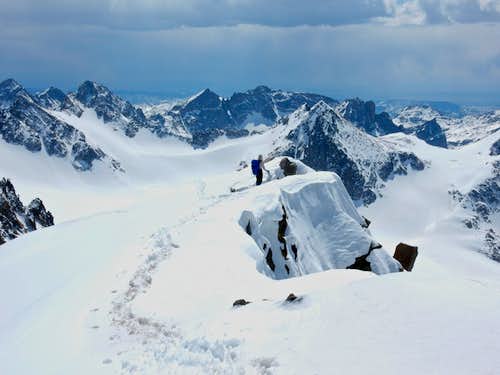 The ski back to camp was, of course, a celebratory blast;near perfect snow and gravity doing all the work.

The next day the weather closed in; we skied up to Bonney Pass then cramponed over the top in low visibility. As we started down, we could not see the bottom of the slope through the blowing snow, this is always a tad intimidating to me. But last year we had skied into Titcomb Basin and looked up at the pass, so we had that memory to go on. Soon we were back on skis and flying downhill, making long looping back and forth swings across the canyon down toward the lakes. 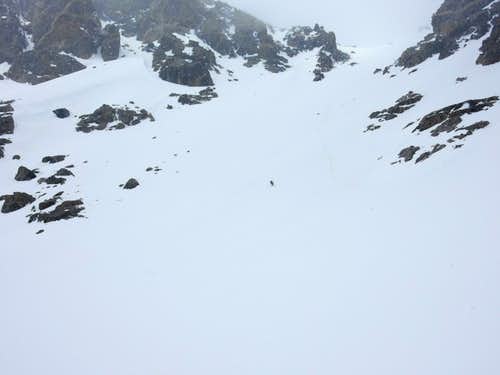 Skiing down from Bonney Pass in low visibility. There is a skier in this shot! 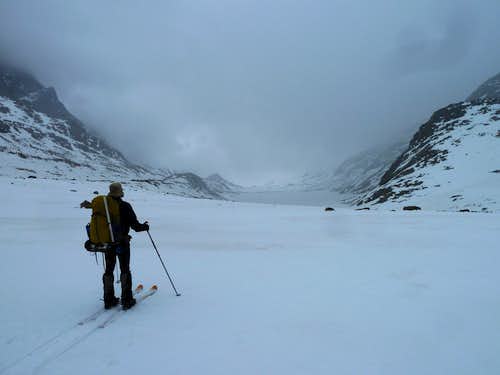 Heading out to Titcomb Lakes in less than ideal weather

Oddly, once the valley bottomed out, we hit some of the worst rotten snow either of us had ever experienced. Skis kept breaking through and dropping us a couple feet, stopping any forward glide. Nasty and exhausting. 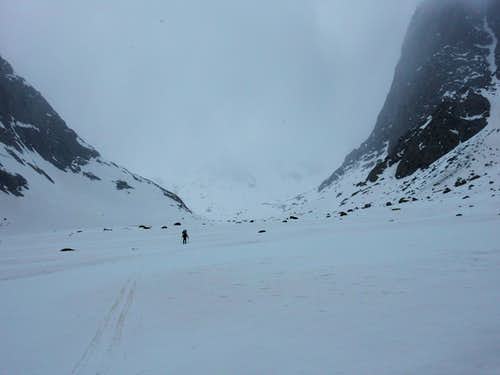 Upper Titcomb basin. Somewhere behind my friend up in the clouds and snow is Bonney Pass, which we had just crossed.

The rotten snow made setting a camp that night difficult; anytime we stepped off our skis we sank to our hips or farther. We finally located a relatively flat rock large enough to set tents on. Luckily the night was quite cold so the snow froze for better skiing. Down at Island Lake we encountered our first signs of recent human visitation, ski tracks. Never saw the track makers though. 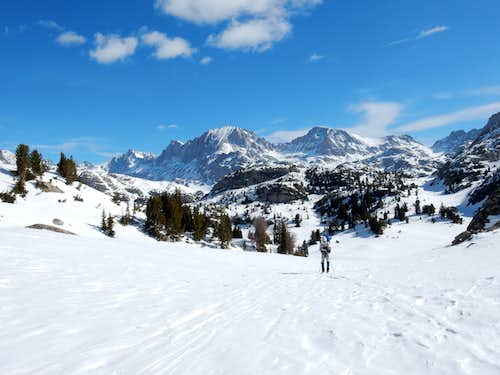 Skiing the low passes between Island and Seneca Lakes. The crest of the Winds is behind us now. The big one on the distant skyline is Fremont Peak, and Titcomb Basin is alongside it to the left. Of course the weather is great now! 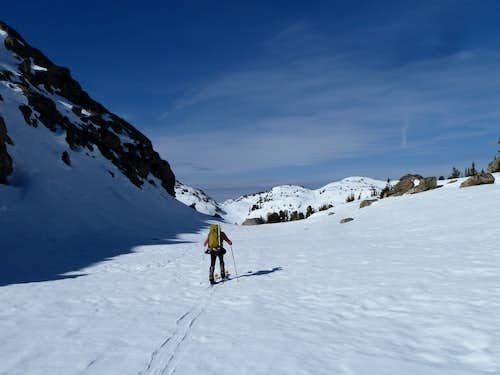 About to turn the corner toward the drop to Seneca Lakes

We made good time on the frozen snow out through Seneca Lakes and camped once more at a pleasant clearing in Miller Park. We were euphoric on the knowledge that we had done it, completed an epic crossing of a major North American mountain range and summitted the highest peak in the Northern Rockies to boot. We had the Winds at our backs. This is one of those once-in-a-lifetime trips where everything comes together perfectly. Deep immersion in an indescribably beautiful and wild mountain range, a successful summit, the joy of skiing great distances over mostly ideal terrain, and a best mountain friend to share it with.

Adding to our incredible luck, the last day provided more good snow to allow effortless and fast gliding through the forest to Elkhart Park. We made it out in time for lunch at the Rock Rabbit in Pinedale. How great is that?

My co-conspirator on this trip put together a great slideshow with some of these images plus many more on vimeo. To view, click:

it's PF Great! A major undertaking for sure. That post-holing with skis on can drain all your energy in a hurry! Love that Rock Rabbit and the posters in the loo!
Great report and photos!! Thanks

I laughed at what Bill Reed said, cuz I had just responded to your final question, "Pretty Damn Great!"

We skied up the Popo Agie from Lander in similar conditions & bright clouds, snowng & blowing, in April of 1975. Camped under overhanging cliffs facing West over steep & deep valley of beaver ponds to other cliffs.

Beaver dams had hung us up, trying to cross on skis, with sticks unseen below snow grabbing skis at unpredictable angles, and ice making us slip all ways, & jerk to a stop until heavy pack momentum slammed you over further, & lost balance on ridge above pond & outlet creek.

Steep ski descent in storm by memory was nerve-wracking even from here.

At least you got sunshine for long ski out without headwinds, and views of Titcomb Peaks. Glamorous.

Thanks for the great TR, really enjoyed seeing what the Winds look like in winter conditions!

What an adventure. Thank you for sharing!

Great adventure and write-up. Way to get after it!

Certainly a long and memorable adventure, and that route is exceptionally beautiful. Good work and thanks for sharing. Mås pics?

As someone who hiked this, I am extremely jealous. This looks astounding and you've inspired me to...I don't know? Do more? Haha! Happy trails.