Giraud Peak is one of the many remote High Sierra Peaks that sees only a handful of visitors each year. "The peak was probably named for Pierre Giraud, sheepman of Inyo County, widely known as Little Pete. Pierre and his younger brother, Alfred, grazed sheep for many years at the bead of the South and Middle forks of Kings River." Francis Farquhar.

Located approximately 3 miles SW of the Palisades, the easiest approach to Giraud Peak is via South Lake and the Bishop Pass Trail. Even this approach requires 20 miles of round trip hiking, 2 miles of which is cross-country through Dusy Basin. The North side of this peak is a strikingly vertical face, while the SE side is a mix of talus and scree chutes. Giraud Peak stands watch over Le Conte Canyon, 4000ft/1.5miles below. From the summit there are excellent views of the Palisades, Devil’s Crag, and the Black Divide. 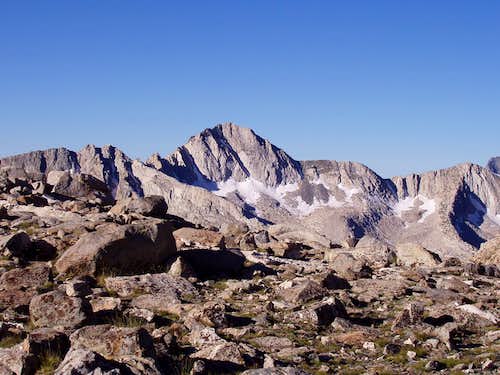 Giraud Peak from Bishop Pass.
The easiest approach is via the Bishop Pass Trail out of South Lake. It is also possible to climb the peak from Le Conte Canyon and the PCT/JMT, though the approaches are not practical for most people, and thus will not be discussed here. From Bishop California drive SW on Highway 168 toward South Lake. Around 8000ft, at the signed intersection, bear left toward South Lake. Follow the road until it dead ends at a large parking lot, the upper area is for overnight parking, the lower lot is for day hiker parking.

Follow the Bishop Pass Trail which starts from the very end of the parking lot. Avoid the trails to Treasure Lakes, Marie Lake, Bull Lake, and Ruwau Lake. Initially the trail climbs slowly toward Bishop Pass, once past Bishop Lake the trail turns to talus/rock and steepens just before reaching the pass. Descend the Bishop Pass Trail into Dusy Basin, here is when you’ll get your first view of Giraud Peak, S/SE and partially obscured by Peak 12266. Follow the trail until 10800ft, then hike to the inlet/outlet of the lakes that form on the upper section of the Dusy Branch. Find an appropriate crossing, how easy this is depends on the snow melt and amount of water in the basin. 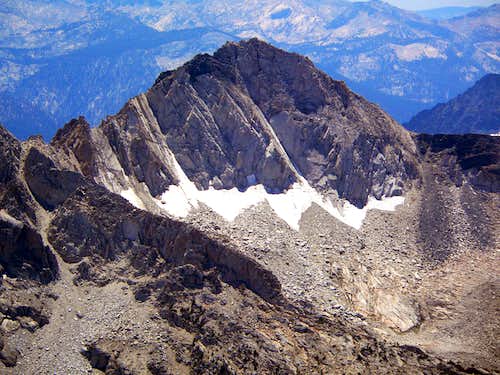 The NE ridge of Giraud Peak (left), follow the knife edge to the summit.

Climb slabs toward a prominent notch on the NW ridge or Peak 12266. Ascended talus, boulders, and scree to the notch between Giraud Peak and Peak 12266. From the notch you have a choice, either ascend directly up the NE ridge which is pretty solid class 4 with some very exposed sections. The other option is to drop 400ft on down the South side of the notch toward Lake 11092 then ascended one of the class 2 scree chutes on the SE face.

There are no restrictions on day hikes of the peak. For those wishing to camp on the trail you must obtain an overnight back country permit from the Inyo National Forest Ranger Station in Lee Vining, Bishop, or Lone Pine. Reservations for these permits are $5/person, walk-ins are free.

Good back country camping can be found at Saddlerock Lake, Bishop Lake, and in Dusy Basin. Permit required as described above. 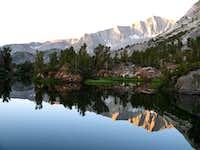 Thanks for catching that Bob, correction made to the page. Eric Lee