Mt. Russell lies a mile north of its much more famous neighbor, Mt. Whitney. Overshadowed by Mt. Whitney's additional 400 feet which makes it the tallest in the contiguous US, Mt. Russell receives only a fraction of the visitors. As one of the fifteen California 14ers, Mt. Russell hardly suffers from neglect, however, and its excellent rock climbing and the relative difficulty of the easiest routes makes it a favorite among mountaineers.
The west and southwest faces feature sheer walls that rival those found on Whitney's East Face. There are various class 3-4 routes on the south, east, and north sides of the peak. The summit is a knife-edge with two high points on either end. The western point is the higher one.

Take US395 to Lone Pine, head west 13 miles on the Whitney Portal Road to ... you guessed it ... Whitney Portal. There are large parking lots available for both overnight and day hikers.

As of 2008, you now need a special Whitney Zone permit for climbing Mt. Russell if you plan to travel via the North Fork of Lone Pine Creek (the usual approach). The peak can be climbed from the north to stay out of the Whitney Zone, but this is a difficult dayhike and will probably require an overnight permit. Regular Wilderness permits are required for overnight stays. These may be difficult to attain by advance reservations, particularly for busy weekends.

Camping is allowed in most areas in the SEKI and John Muir Wildernesses that surround Mt. Russell. There are a variety of lakes on all side of Mt. Russelll that offer decent camping, including Arctic, Tulainyo, and Upper Boy Scout Lakes (the later being quite popular for an east side entry). Permits can be obtained in advance or at the Whitney Ranger Station in Lone Pine when you arrive.
Bear canisters are now required for hikes originating from Whitney Portal. In addition, Marmots are also very aggressive in this area, and caution should be used when leaving food at camp for the day.

"Named for Israel Cook Russell (1852-1906), geologist with the Wheeler Survey and the USGS, and professor of geology at the University of Michigan, 1892-1906. (Farquhar: R. B. Marshall.)"
- Peter Browning, Place Names of the Sierra Nevada

"In the middle distance there rests upon the desert plain what appears to be a wide sheet of burnished metal, so even and brilliant is its surface. It is Lake Mono. At times the waters reflect the mountains beyond with strange distinctness and impress one as being in some way peculiar, but usually their ripples gleam and flash in the sunlight like the waves of ordinary lakes. No one would think from a distant view that the water which seems so bright and enticing is in reality so dense and alkaline that it would quickly cause death of a traveler who could find no other with which to quench his thirst.

The formation as a whole resembles a forest of gnarled and contorted trunks and stumps changed to stone. The impression which this imitation forest leaves on the mind is that it is in some way weird and uncanny. The silent and motionless trunks with their uncouth shapes recall Dante's description of the wood of the suicides. This fancy is heightened by the proximity of a sea whose flowerless shores seem scarcely to belong to the habitable earth."
- Russell, Israel C., 1889, Quaternary history of the Mono Valley, California: : U.S. Geol. Survey 8th Ann. Report

"All evidence available tends to show that Rainier is an extinct volcano. It belongs, however, to the explosive type of volcanoes, of which Vesuvius is the best-known example, and there is no assurance that its energies may not be reawakened."
- Israel C. Russell

Perhaps the best photo ever taken from Mt. Russell: 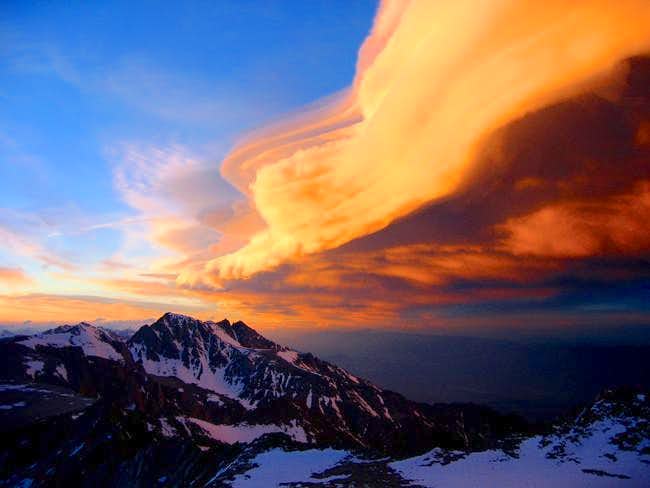