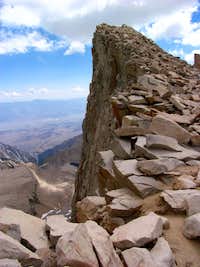 This is the back of Crooks' twin, Keeler needle.
Crooks Peak (formerly known as Day Needle) is a short, but worthwhile "add-on" to the standard hiking route for the Mount Whintey summit. Both the Keeler Needle (the middle needle in the photo) and Crooks Peak summits are within fifteen to twenty minutes east of the main trail to the Whitney summit. The ascent is very straightforward. As with Keeler, Crooks is simple class three scrambling to the peak. The apex can be pretty unnerving, as is is VERY exposed. Immediately to climbers left upon summiting, there is a ultra sheer cliff. I tossed a half dollar sized stone from the top, and it left my field of vision before it hit anything, about six or seven seconds into its fall. Like Keeler, there is a makeshift registry. I believe it is a Tupperware or Rubbermaid container sheltering a notebook and a pencil. Despite the fact that the two needles are not listed among California's "fourteeners," (due to relative proximity to Whitney) they are definitely a worthwhile addition to anyone willing to invest another hour in their Whitney hike. The cliff on the north face of Crooks is as intense as cliffs come. Go check it out. You won't be sorry you did. 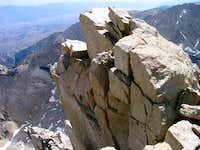 This is the imposing summit of Crooks. Keeler's is a little less sketchy
Route finding is a piece of cake. On the 10.7 mile hiker's route up Mount Whitney, after having passed the 99 switchbacks (actually over 120) traverse along the west side of the Whitney massif, until the backs of the needles come into view. They are a little bit easier to identify on the way down, but simple nonetheless. On the ascent, Crooks will be the first you pass, and Keeler follows shortly thereafter. Naturally, on the descent, the order is reversed. Simply find a point where the trail is the closest to the summit, and start scrambling. I climbed the northern ridges of both Keeler and Crooks, but the scrambling looked to be just about the same everywhere else. At one point on Crooks I had to use some really simple bouldering moves, but it could have been easily avoided had I so chosen. Just get up there and go. You'll make- it no problem. Just stay away from the edges when you get to the top! 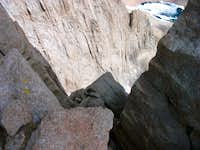 Looking down from the top.
[

One researching technical routes in the region would find that there are several classic traditional routes up the faces of the needles. If that is what you are looking for, The Ranger's station in Lone Pine has all the information you would need.

Permits must be acquired for anyone venturing beyond the Ranger's checkpoint on the Mount Whitney trail. They are date and duration specific, so you must plan in advance to climb anywhere in the Mount Whitney area. It is one of the most popular climbs in the nation, and is thus regulated. Permits are $30, and are often booked months in advance. If you know when you are going to be climbing, call the Inyo National Forest Ranger station (760-876-6200) and ask about availability. If you are climbing with a large party, the earlier you get your application to them, the better, as they utilize a lottery system to decide who gets to go, and when. Good luck! Various campsites are located along the main Whitney trail. The most popular ones seem to be the camp located at the base of the talus slope on which the "99 switchbacks" are found, and another located about 3 miles into the hike. Once again, camping activities are heavily regulated and subject to permit, so make sure you let the rangers know exactly what you want to be doing there and for how long- to avoid disappointment or penalties.

"This is the second needle south of Mount Whitney. It was formerly known as 'Day Needle,' but it has been officially named after Hilda Crooks, who hiked up Mount Whitney every year from her mid-60s to her early 90s. She rode in a helicopter to the summit of her eponymous mountain in 1995."
-R. J. Secor, The High Sierra, Peaks, Passes, and Trails (Second Edition)

"William Cathcart Day (1857-1905) of Johns Hopkins University, later professor of chemistry at Swarthmore College. Day was with Langley's scientific expedition to the sumit of Mount Whitney in 1881. The name is not on USGS or USFS maps, yet it was named at the same time and in the same way as 'Keeler Needle,' which is on the maps. 'Day' is the pinnacle immediately south of 'Keeler.'"
- Peter Browning, Place Names of the Sierra Nevada