The Grossvenediger is the 4th highest mountain in Austria, it is #2 in the Hohe Tauern, where it is only topped by the Grossglockner. Grossvenediger is the very center of the Venediger Group (the most western and with 1050 km² the biggest part of the Hohe Tauern). The summit is the frontier of the austrian states of Salzburg and Tyrol (the isolated eastern part). Even though glaciers are melting here as everywhere, it is still a pure glacier mountain. The Schlaten-Kees ("Kees" is the local term for glaciers) reaches up to the summit and provides a technical very easy ascent by foot or with Ski. Generations of mountaineers have climbed Grossvenediger as their first high glacier mountain. But there are many crevasses, so taking a rope is a must, at least in the summer season. 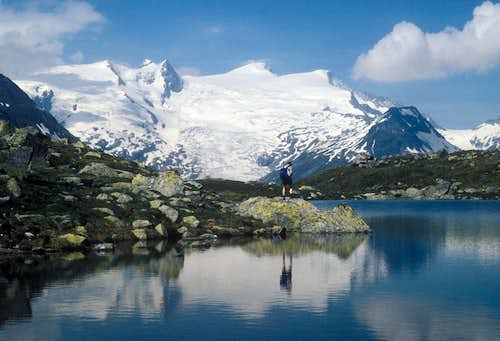 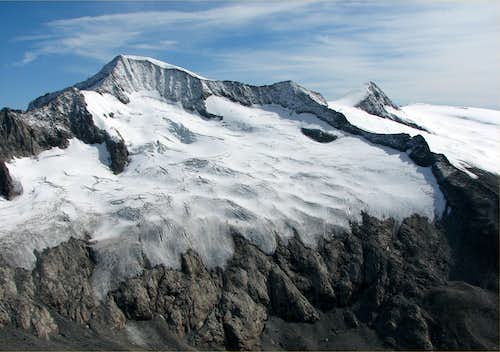 From Munich via Kitzbühel to Mittersill. Then
a) for the north route along the Salzach valley untill Neukirchen (941 m)
otherwise follwing the Felbertauern-Road through the tunnel
b) for the east route and the south east route: immediately after the tunnel: parking at the Matreier Tauernhaus (1512 m)
otherwiese
c) for the south route following the road until Matrei, then the Virgental until the village of Hinterbichl (1336 m)
(You might have a look on Ari's nice map on the Grossglockner page)

If you want to go with Ski, I recommend the north route or the south route.

Other, more difficult routes to the summit are:
· West ridge, UIAA III at the approach to the ridge, UIAA II at the ridge itself, 4,5 h from the Kuersinger hut (see north route); the ridge is reached normally with some ice climbing at a height of 3458 m at the "Westgrat-Schartl"
· North ridge, UIAA III+, 6 h from the Kuersinger hut (see north route)
· North east face: height 370 m, various difficult routes - ice 55°, rocks UIAA IV, dangerous because of stonefall and avalanches, therefore not common any more. No ice left in former ice climbing routes. It's better to do the north east flank to the north ridge and follow this ridge to the summit, see here on www.bergsteigen.at
· North west face: height 175 m, UIAA III+, there was the first effort in the year 1828, first ascent by Eugen Guido Lammer in the year 1891
· South west face: height 230m, up to 48° steepness, first ascent by Eugen Guido Lammer on August 8th 1893. Nowadays only recommendabele with firn snow conditions in spring. see here on www.bergsteigen.at

no restrictions of climbing or fees although the whole area is part of the Nationalpark Hohe Tauern.
Camping is not allowed in the National Park, but alpine bivouacs are allowed.
Fee for crossing the Felbertauern-Tunnel € 10,00 in each direction

March to May with Ski, July to September by foot. In summer time the huts are guided and you can get food almost as in a restaurant. Opening in spring season varies.

south route:
Johannishuette: opens March 10th
Defreggerhaus: opens at Easter and Pentecoast and on some weekends if requested.

north route:
Kuersinger Huette: opens in the beginning of March

(thanks for contributions to herbie)

To view and/or print maps for mountaineering in Austria see www.austrianmap.at
(for Browsers Version 4 and above)

guide book of the german alpine club</A
(in german) will come out soon. This is important because ice conditions described in the older editions do not fit any more

guidebook for ski tours (in german):
Rudolf Weiss, Skitouren Nationalpark Hohe Tauern, Steiger Verlag, Innsbruck, last published edition 1998, ISBN: 3804370349, out of print but perhaps available on www.zvab.com. This book has the advantage to cover all sides of the mountain

The source of the name "Venediger" is not known. It is proofed that you can not see the city of Venice (the german name for Venice is "Venedig") from the summit, but perhaps people in ancient times thought so?

The first effort to climb the Grossvenediger was made by Erzherzog Johann (a son of the emperor Leopold II) with local guides in the year 1828. They were stopped by an avalanche in the difficult NW-face. But on September 3rd 1841, a big party of 28 persons reached the summit over the north-route. They had been invited to take part in the "expedition" by a newspaper letter! The leading guide in the year 1828 and also in the year 1841 was the forester Rohregger.