This climb can be Grade II to III depending on conditions with snow and / or ice to 55 degrees and quite possibly a cornice to overcome at the top. The lower part of the route is on Ice Cliff Glacier and can involve large crevasses and / or ice cliffs depending on the season. The upper part of the route ascends the obvious steep couloir above the glacier. Exiting the couloir can be the crux of the climb if large cornices are present. The route tops out near the top of Cascadian Couloir. Moderately steep snow and / or scrambling leads to the summit from here. Bill and Gene Prater along with Dave Mahre made the first ascent of the Ice Cliff Glacier Route on August 5, 1957. The first winter ascent was made in March 1975 by J. Reilley Moss. (Second winter ascent February, 1976 by Rick Johnson & Fred Spicker.)

Ice Cliff Glacier from the basin.

The approach is via Mountaineer Creek from the Stuart Lake Trail. Late in the season there is a climber's path with cairns. Early season one must find their own way on the snow into the basin at the base of Sherpa and Ice Cliff Glaciers. Leave the Stuart Lake Trail at the first switchback where it starts to climb - about half a mile past the Colchuck Lake Trail junction. The route parallels Mountaineer Creek staying on the right side. It is 3 to 4 miles from the trail into the basin.

As with most snow / ice / glacier routes, the type and severity of the difficulties on the Ice Cliff Glacier Route can vary greatly depending upon all the variables that effect snow pack and slope conditions: the time of year of the climb, the amount of snowfall and avalanche activity during the winter, and now the varying degrees of glacier retreat and melting from year to year. Climbers may well encounter significant differences in the route from month to month. I climbed the route in February. We were able to bypass all the difficulties on the lower part of the glacier because of the amount of snow and avalanche debris that bridged the crevasses and even offered an easy ramp up the main ice cliff. However, there was an extremely large cornice at the top of the route that caused us major problems. Parties climbing the route later in the season might find the major difficulties on the ice cliff and lower glacier with minimum problems exiting the top after the cornice has melted back or fallen off. Because of all these variables, climbers need to check current conditions and if they feel it necessary seek information on recent climbs. Thus, I am going to include a very general description of the route followed by descriptions of climbs done at various times and during various seasons – both in text and as links to off site trip reports. 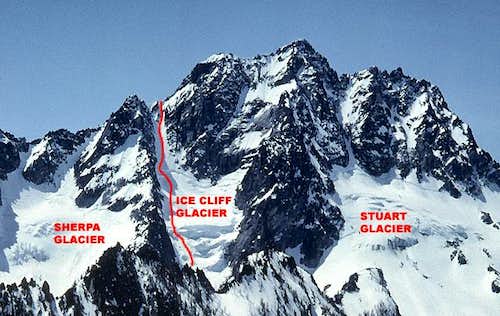 Cornices at top of couloir

In general, the route description is very simple.

Attain the upper part of Ice Cliff Glacier then ascend the Ice Cliff Glacier Couloir at its head. The top of the couloir is essentially at the top of the Cascadian Couloir on the south side of the mountain. From the top of the couloir, the east ridge is followed to the main summit. (Usually traversing below the false summit on the south.) Exactly how this is accomplished will depend on conditions. The later in the season one climbs the route, the more likely it is that some very steep or even vertical ice will have to be climbed to overcome the ice cliff(s) below the upper glacier. This can be the crux. Earlier in the year, the exit from the couloir can be extremely difficult because of the large cornices that build there. Most parties descend via the Sherpa Glacier Route. Climbing in Ice Cliff Glacier Couloir

DETAIL OF CLIMBS AND LINKS

The following text was provided by SP member climbit describing conditions in May, 2002. Included is some good advice regarding the route in general and conditions found at that time of year: From the upper basin the right side of the Icecliff Glacier will be visible. Over the past few years, this has been the more difficult side of the glacier, so you may want to hike upvalley and take a look at the left side - which is where you will probably want to climb. Climb from camp towards the obvious terminal moraine below the glacier outlet. Find a way over or around this and onto the left side of the glacier apron. This may be snow or ice to 40 degrees. Crevasses also present. Work up and keep left until hitting the ice cliff itself. At the cliff itself, there may or may not be a 10-100 ft step of steep or vertical ice. Early season the step is less likely to be in condition and there may be only steep ramps to 50-60 degrees. Once on top of the ice cliff, find a way around the 'schrund (left or right - we turned it left in May 2002) and then up into the steep Ice Cliff Couloir. A decision needs to be made here whether to stay left until the couloir branches and then take the RIGHT fork, or to move over immediately. Due to icefall and spindrift, we stayed left to avoid much of the objective hazard falling during our climb. Note the conditions during your ascent and adjust accordingly. The couloir - ice or snow - probably tops out at 50-55 degrees maximum slope but is pretty sustained. After taking the right fork, go to the top of the couloir. In early season there will be a significant cornice to defeat. Work over in the sloping benches and shelves on the right side of the couloir. As the cornice melts back, there may be a very direct and low-5th rock exit in the center of the couloir up a crack / small open book. If you can see the cornice on top of this rock formation, we advise: DO NOT take it. It's a pain with poor protection in thinly adhered snow once on top of the rock. If the cornice is not present on top of this rock, go for it since that will get you out of the couloir and onto the East Ridge of Stuart. Once on the ridge, follow it closely (bypassing sections on the left - South - as desired) around the false summit and onto the summit. THERE is significant OBJECTIVE hazard on this route from icefall, rockfall, and avalanche. Be prepared for and aware of snow, ice, temperature, and weather conditions. We saw most of the debris-fall on the West (right as ascending) side of both the Icecliff and Sherpa Glaciers during our early season May 2002 ascent.