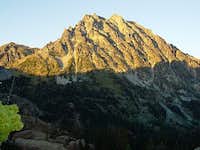 The West Ridge Route is probably the second most popular technical route on Mount Stuart. Even though it has a reputation in many circles of being a fairly easy climb, the route is long and complicated with many opportunities to get off route onto more difficult terrain. While a strong experience party can complete the route in one day car to car from the Teanaway Trailhead, it is not uncommon for parties to have route finding problems and bivouac on the route or descent. Most parties will probably opt for climbing from a camp in the vicinity of Ingalls Lake. Several other routes on the mountain merge with and finish to the summit via the upper part of the West Ridge Route. From the south the West Ridge Couloir joins the route at the West Ridge Notch. From the north, the Northwest Buttress, Razorback Ridge, and Stuart Glacier Couloir join the route near the Notch. The Northwest Face of the Lower West Ridge offers a 600 foot technical start (5.9) to the route, joining it at the top of the first long couloir. Lex Maxwell, Fred Llewellyn, and John Vertrees made the first ascent of the West Ridge in August of 1935. 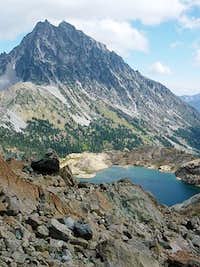 Looking to the West Ridge across Ingalls Lake.

The best approach for climbing the West Ridge is via Ingalls Lake from the Teanaway Trailhead. It is easiest to proceed past Ingalls Lake and make a traverse across the slopes to the north from Stuart Pass to reach the southwest shoulder of the mountain. Descending into Ingalls Creek and climbing back up is the hard way. 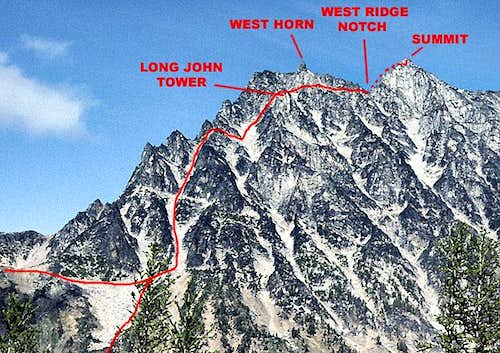 West Ridge Route from the south

The route begins at the base of the second large gully/couloir from the northwest shoulder of the mountain. This couloir is climbed to its head. From here, traverse east (climber's right) into the next couloir, then up and across this attaining the notch behind Long John Tower. From Long John Tower, a rising traverse across third class ledges leads to the West Ridge Notch. It is possible to get off the easiest route and into fifth class terrain both just below Long John Tower and on the traverse to the notch. 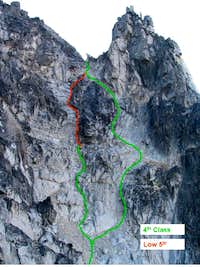 From the West Ridge Notch, the route ascends just south of the ridge crest to an obvious ledge leading onto the north side. After about 60 feet on the north side, climb exposed pitches (fourth to easy fifth class) back to the ridge crest. Continue up the ridge crest to a large ledge traversing across the southwest face of the summit pyramid. Follow this ledge to near its end where several cracks leading to the south rib of the summit pyramid are encountered. A short dihedral with a fixed piton (5.4) or a layback further toward the end of the ledge (5.6) lead to easier fifth class climbing along the south rib and to the summit. Climbing on the West Ridge:

Rope and a small rack. Ice axe and crampons in early season.