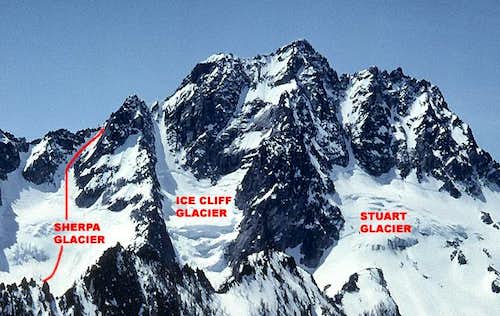 Mount Stuart from the north.

Sherpa Glacier offers a good early season moderately steep (about 40 degrees) route on the north side of Mount Stuart. This is the best descent route (in early season) back to camp in the basin at its base and is commonly used after climbs of Ice Cliff Glacier.

Bill and Gene Prater with Don and Nelson Torrey made the first ascent of Sherpa Glacier in June of 1956.

Please note that this route is best done in early season - see the attached trip report for some of the difficulties that can be encountered in late season.

The approach is via Mountaineer Creek from the Stuart Lake Trail. Late in the season there is a climber's path with cairns. Early season one must find their own way on the snow into the basin at the base of Sherpa and Ice Cliff Glaciers.

Leave the Stuart Lake Trail at the first switchback where it starts to climb - about half a mile past the Colchuck Lake Trail junction. The route parallels Mountaineer Creek staying on the right side. It is 3 to 4 miles from the trail into the basin. 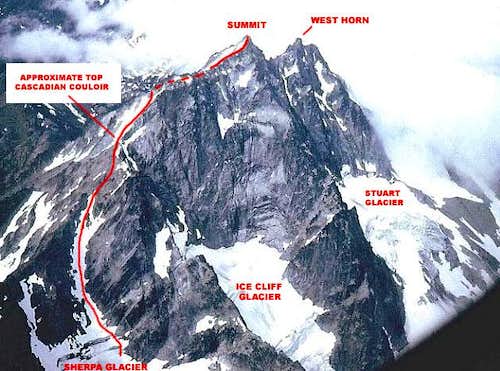 Sherpa Glacier Route from the air.

Attain the glacier proper on either its left or right side depending on the time of year and state of the large crevasses near the bottom. Climb up the glacier and ascend the obvious steep couloir (about 40 degrees) on the right to the crest of the east ridge.

Climb up the east ridge meeting the Cascadian Couloir Route and past the false summit to the top. Travel is generally easier on the south side of the ridge and will be moderately steep snow and / or broken rock depending on the time of year.

Sherpa Glacier Route from below. 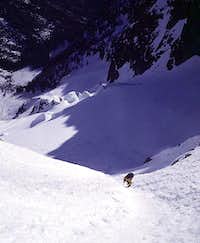