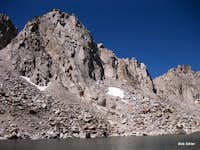 The ridge system running northwest from University Peak breaks up into several spires known as the Kearsarge Pinnacles. Viewed from Kearsarge Pass, the pinnacles are impressive but seem dwarfed from behind by East Vidette and other peaks, but when viewed from the Kearsarge Lakes about 800 vertical feet below the pass, the pinnacles are awe-inspiring and may seem to scream to be climbed. To a non-climber, the peaks may look unclimbable, but each can be climbed with Class 3-5 climbing. Climbing just one of these peaks means about 15 miles round-trip with almost 4500' of climbing (this includes 800' or so gained on the return hike).

Views are especially spectacular because there is a great sense of wilderness. Because the peaks are lower than surrounding peaks and behind the main crest of the Sierra, there are no human-made signs (except trails) in sight. It is all mountains, lakes, canyons, and sky that one sees from these summits.

The individual pinnacles are not named, so this page and its photo captions will refer to the peaks by number, numbered from left to right as one sees them from the pass. How many notable pinnacles there are is subject to one's interpretation of the term, and one could identify at least 10 "major" ones, but it would also be possible to make the case that there are 15 or more worthy of distinction. My numbering of them is based on a photo from Bob Burd's trip report on climbing the Kearsarge Pinnacles. In turn, his numbering came from a photo in R.J. Secor's The High Sierra: Peaks, Passes, and Trails.  And Secor's source was this picture.  This system appears to be the standard for identifying and numbering the pinnacles. 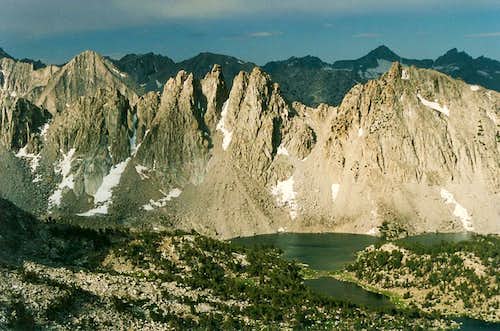 The USGS Mount Clarence King quad does not give an elevation for any of the pinnacles (and is further unhelpful by listing contour intervals in meters), but a close study of topo maps shows that of the pinnacles Burd identifies, 4 and 10 are the two highest, with #4 being the higher of the two. Searching online, I was able to find an 11,956' elevation for a "Kearsarge Pinnacles N" (definitely #10) and a 12,031' elevation for a "Kearsarge Pinnacles S" (about where #1 is, though #1 in the picture referenced above is clearly not as high as 4 or 10, and Burd speculates that the number is a spot elevation from an older topo map and not an accurate number for that particular point-- see the Additions and Corrections discussion).
Source for KPN
Source for KPS

It is my hope that the annotated map below will help people locate what I am referring to here as #10/KPN, #4, and KPS. 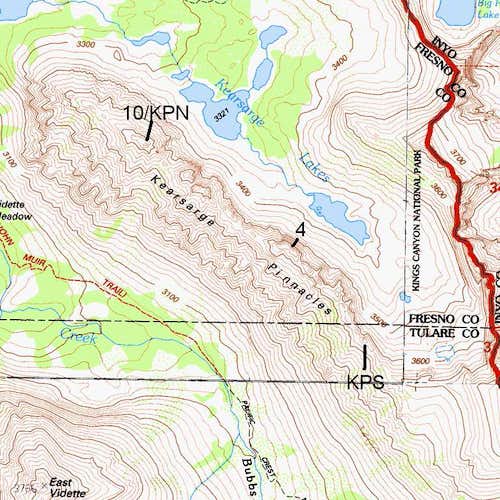 I have climbed Pinnacles 9 and 10 not because they are the hardest or the easiest or the closest to the trail but simply because #9 inspired me deeply when I first saw it 13 years ago and because #10 is on the other side of the saddle between the two. Burd's trip report states that there was a register atop #10 when he went, but I found neither a cairn nor a register on either peak by the time I climbed them.

In my opinion, the best way to provide climbing beta for these peaks would be to submit separate route pages for separate peaks. I propose using the numbering system shown in Burd's picture and, if someone chooses to submit beta for Kearsarge Pinnacles South, to call it that. In that spirit, I will be adding route pages for Pinnacles 9 and 10. 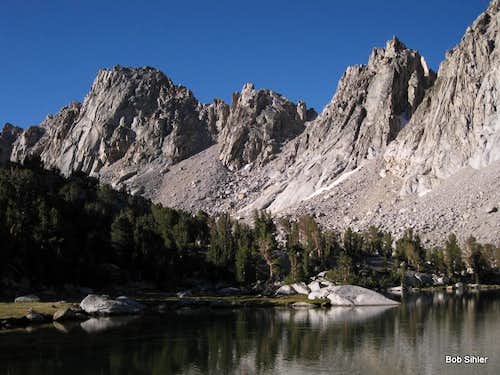 In the area, there are the Kearsarge Pinnacles, the Kearsarge Lakes, Kearsarge Basin, and a Kearsarge Peak. The name refers to the USS Kearsarge, a Union warship famed for sinking the Confederacy's Alabama during the American Civil War. Pro-Union workers in the region started naming settlements and features for the Kearsarge in order to taunt Southern sympathizers.

More on the Kearsarge 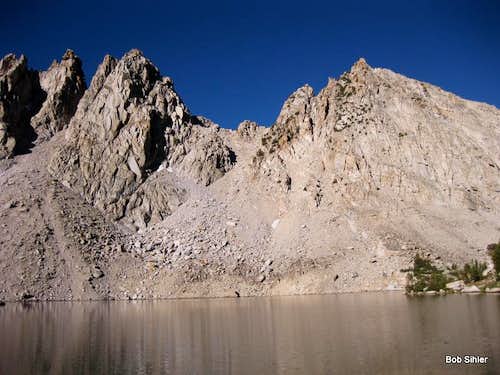 From the town of Independence in Owens Valley, head west into the mountains at the signed turnoff for Onion Valley and drive 13 miles to the road's end, where there is a large parking lot (this is a popular area for day hikes and for beginning and ending backpacking excursions).

The trailhead is at 9200'. Hike 5.5 miles to Kearsarge Pass, which is on the boundary of Inyo National Forest and Kings Canyon National Park, gaining about 2600', and then descend about a mile and 800' to Kearsage Lakes. There are use trails around the lakes. To approach the Kearsarge Pinnacles, stay on the east side of the lakes. If you stay on the west side, you will find that what the map makes look like the outlet of the lake closest to the peaks is too wide to cross easily. It looks shallow enough to cross, or did in July 2012 from above, but that is no guarantee, and you will still have to get wet. Using the east side is a little longer but keeps you dry. Plus, the east side puts you closer to the majority of the pinnacles.

The Kearsarge Pinnacles are within Kings Canyon National Park, but no entry fee is required if you have approached from the national forest. And as long as you are just out for the day, no permits are required.

Onion Valley Campground is conveniently located at road's end. Some sites are available on a first-come, first-served basis, and others can be reserved through recreation.gov. There are also two other Forest Service campgrounds located along the way to Onion Valley-- Lower Grays Meadow and Upper Grays Meadow.

If you want to camp in the backcountry, you will need a permit. I am unfamiliar with the permit procedures there these days, so please check the Kings Canyon and Inyo National Forest sites for information.

Hey Bob, I had to change the URL for my TR on kearsarge pinnacles which broke the links you added to your page. The new URL can be deduced from the summit log I just added. Sorry about that...