On October 20th, 2017 the hut burnt completely. Plans have been made to build a new one. Until then on Korošica meadow there's no hut. 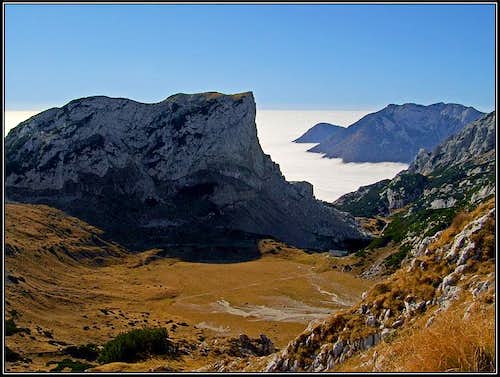 Dedec above Korošica meadow - the hut is on the right 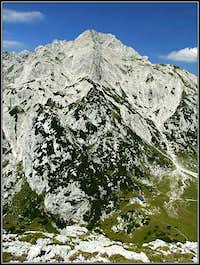 In Slovenian language č, š and ž are pronounced like ch, sh, and zh. The meadow, where the hut stands, is Korošica (meaning: 'The Carinthian').

Kocbekov dom is standing on the western edge of a big, completely horizontal alpine meadow, called Korošica, on the altitude of 1808 m. It is named by Fran Kocbek (1863-1930), the deserved initiator and organiser of mountaineering in Savinjska dolina.

The first hut was built in 1876 by a German-Austrian mountaineering club, but in 1881 it burned down. In 1882 a new hut was built. After the World War I, the hut was taken over by 'Savinjska podružnica' - a part of Slovenian Mountaineering Organisation, after which it was several times renewed. During the World War II, the hut was taken over by the German Alpine Club and after the war Celje Mountaineering Club (Planinsko društvo Celje Matica) is running it. Major renewals were done again in 1973 and in 2003.

Just above the hut, the southern face of Ojstrica is rising. But due to its strategic point, Kocbekov dom serves more than only the ascents on Ojstrica. It is a crossroads of many hikes, a home for climbers, who challenge the hard routes in the nearby Dedec in Vežica and in winter and spring also a welcomed refuge for tour skiers.

The hut is opened from mid June till mid September. In the dining room it has 80 seats, in 4 rooms there's 17 beds and in a common room 40 beds more. The winter room with 10 beds is opened all winter. 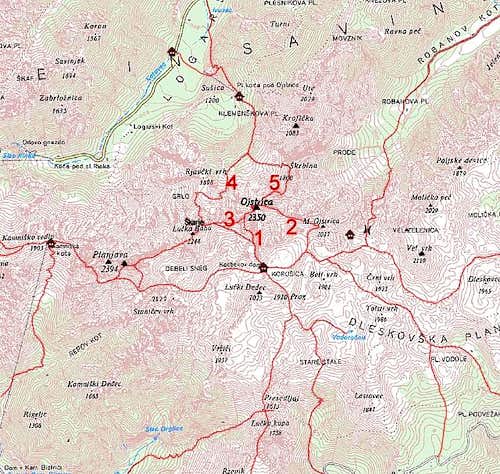 Marked, medium hard hike-up, 4 h. See also the description here. The trailhead is in Kamniška Bistrica valley, 1 km before the big parking place at the mountain hut. We enter the Kamniška Bela valley where the main road crosses the creek, which has at this point a nice waterfall. The altitude is only 571 m. A comfortable path leads into Kamniška Bela in the NE direction. Close to the point, where the path starts to climb steeper, we can also visit a nice waterfall, called Orglice (if the creek has enough water). Our path goes in many turns upwards, allways in the NE direction, until it reaches the Presedljaj (saddle), 1613 m. Till here 2.5 to 3 hours. On the other side of the mountain ridge our path now goes more in a northern direction. We move high above the valley of Lučka Bela, ascending only moderately, until we reach the Prag (saddle), 1910 m. From there we descend 100 m on a broad green Korošica plateau, where the hut stands.

The direct ascent over Šraj peski is much harder.

Marked, easy hike-up, 3h. From Podvolovljek valley we drive towards the west into the side valley of Lučka Bela. The mountain road ends on a parking place on some 1080 m, the place is called "Za loncem" (because of a nice rocky 'pot' in the nearby creek). From there, the marked path goes northwards by the valley. First a short, moderately steep ascent through the woods, then a flat part along the E bank of the dry creek bed. After some 30 min the path starts ascending more steeply, a bit towards the right. We must do at least 400 m of altitude, the trail winds mostly through steep woods, crossing a few ravines. So we reach Vratca, 1655 m, where the path starts decending some 40 m, finally reaching a very beautiful ex pasture. It is called Stare stale, a charming place with a humble water source. From the meadow we continue further northwards, until the valley closes and the marked path leads us a bit left towards Prag, 1910 m (the trail branch towards the right goes to Vodotočnik). On Prag we hit the path #1, coming from Presedljaj. To the hut we have now only a short descent.

Remark: before reaching the saddle of Prag, you can deter from our trail right and follow another marked trail just some 10 min to the beautiful Vodotočnik. This meadow with a small, shallow lake and and a shepherds hut is certainly worth a visit.

Marked, easy hike-up, 2 h. This is the shortest and easiest approach, also the most recommendable one in winter. From Podvolovljek valley we drive up by a mountain road on Dleskovška planota (plateau). See the main page of Kamnik & Savinja Alps for more details. On the crossroads, we take the left branch, which brings us to the parking place below Podvežak alpine meadow, 1440 m. There's a big pano with many inscriptions about trails. To Podvežak alpine meadow we can walk by a road (closed for public traffic) or by a marked path. From the meadow we continue in the N direction. The path is well marked and goes by a broad valley. From a broad saddle we descend a bit to a small meadow (Inkret), where the path has already the NW direction. After another ascent we are on the upper part of the plateau. By several flat valleys, the terrain is typical karstic, we continue towards the NW. Finally we reach a saddle below Beli vrh (on the left) and start descending slightly. Crossing the slopes above Molička planina (meadow) we reach Sedelce (saddle), 1900m. From there towards the W, down on Korošica meadow and to the hut.

Marked, easy hike-up, 2 h 30 min. This approach starts even a bit higher than the one below Podvežak, but is also a bit longer. From Podvolovljek valley we drive up by a mountain road on Dleskovška planota (plateau). See the main page of Kamnik & Savinja Alps for more details. On the crossroads, we take the right branch, which brings us to the parking place on Ravne alpine meadow, 1500 m. From there we continue northwards by a good, marked path. When it passes the summit of Dleskovec (on the left), it starts turning and finally gets the western and even south-western direction. So we ascend Sedelce, 1840 m, between the summits of Dleskovec and Veliki vrh. From there we continue towards the SW, all the way around Veliki vrh, and then towards the NW on Prag (saddle), 1870 m. There are ups and downs on this route and also the continuation is similar. The marked path brings us towards the NW on Molička planina (meadow) and towards the west up again on Sedelce, 1900 m. There we join the route #3, descend on Korošica meadow and continue to the hut. 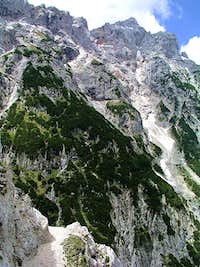 Marked, strenuous and in a few places quite exposed, marked path. 4 h. See the more detailed description also here. The trailhead is at Roban's farm, 700 m - see the main page of Kamnik & Savinja Alps for more details. A decent macadam road goes through the beautiful valley till its end, to Robanova planina (pasture). From there you follow the marked path, which soon starts turning a bit towards left, then crosses two ravines and finally reaches steep and rocky slopes of Velika Zelenica. In spring and early summer here's a snow field and a weak waterfall. From the waterfall the marked trail ascends steeper, allways keeping right of a big ravine. When reaching walls, it goes right again, well marked and protected. Using a few narrow and exposed ledges as the most natural passages, ascending also directly upwards, we come over the rocky part in an hour. In next few minutes we reach over grassy slopes the saddle, cca 1750m. Now we are on the northern edge of Dleskovška planota carst plateau. The marked path leads us horizontally towards the west, soon we reach Molička planina, where on the edge a small hut and chapel stand. We don't need to go just to the hut, but proceed westwards. The path starts to ascend slowly again, leading us around Mala Ojstrica to Sedelce and further down to Kocbekov dom.

Marked, medium hard, protected path, partly exposed. 3 h. From the hut we go towards the E, till the path reaches the W wall of Planjava. Then it first crosses a fine scree field and further on starts ascending by narrow, crumbly bands across the slope. Wherever needed, the path is protected, but requires a safe step and clear head anyway. The direction is SE. At the end of crossing, the path reaches Sukavnik, 2100 m, a grassy balcony in the south ridge of Planjava. Now the path starts continuing crossing the grassy S slopes of Planjava. It goes all the time towards Srebrno sedlo (Silver Saddle), 2115 m. (To ascend Planjava, we should deter left soon after Sukavnik, and also from Srebrno sedlo a path goes on top). From Srebrno sedlo we now need only to descend towards the east to Kocbekov dom. This part is easy and not exposed any more.

If we ascend the summit of Planjava (by any of the two south routes), we can continue by the main ridge towards the east. Also this path is marked, but again on a few places quite steep and narrow. It goes over the picturesque summit of Lučka Brana (Baba) on Škarje notch, where it joins the path, coming from the north, from Logarska dolina (#7 below). From Škarje notch we descend towards Kocbekov dom in the SE direction in less than 1 hour. Coming from Kamniško sedlo, this route is some 30 minutes longer, but we take also the summit of Planjava and the route is more beautiful. 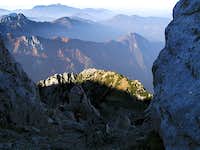 Marked, long and strenuous ascent over Škarje notch, 5h. See the more detailed description also here. From Logarska dolina (valley) you first ascend by a marked path to Koča pod Ojstrico (hut), 1208 m. 1h. From there we continue towards the S, crossing through a forrest the western slopes of Kroficka. On the altitude of 1480 m, 30 min from the hut, there is the path branching. Our 'Škarje Notch' route is easier and goes right. We cross the slopes below Ojstrica's N face towards the SW, towards the passage between Ojstrica and Rjavčki vrh, 1898 m. By a steep scree we ascend towards the S we, then the path crosses towards the SW and at the end even towards the W again and we reach the saddle below Rjavčki vrh. The altitude is a bit more than 1800 m. Here the path turns left, aiming to the notch in the main ridge. In many turns it is winding up the scree slope. Finally the last meters below Škarje notch are more steep, but we reach the sunny side without any problems. A well deserved grassy balcony is awaiting us to take some rest. Down to Kocbekov dom we have now less than 1 hour more.

8. From Mala planina or Velika planina

Marked, a medium hard, partially exposed and artificially protected path, 4h. The route from mala and Velika planina goes over the summit of Konj, 1803 m. See here the description. From alpine meadows we go all the time towards the north. From the summit of Konj, down on Presedljaj pass the path is narrow, protected and exposed. On Presedljaj we hit the path #1 and continue by it over Prag to the hut.

From Kocbekov dom, you can go further to: