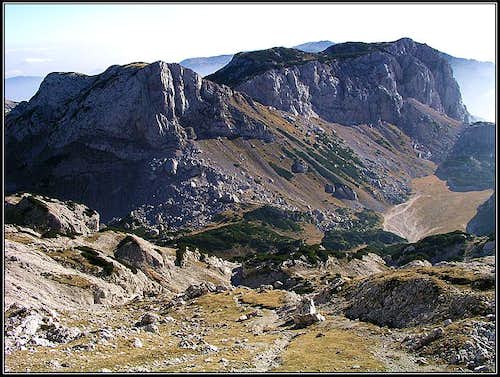 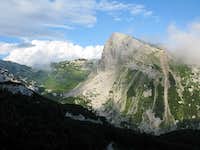 Branko - From the west 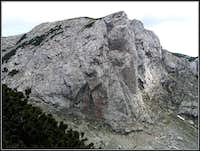 General remark: When reading Slovenian words on maps or in books, you will find special characters for ch, sh, and zh. They are written with c, s and z with a caron - little v above them: č, š, ž. So, Lučki Dedec is pronounced Luchki Dedets (Luče = nearby town). 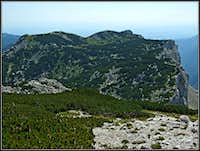 South of Ojstrica, the easternmost high summit (2350m) in the main Kamnik Alps crest, many mountains are rising out of a high plateau, called Veža. But a few side ridges, going in a southern direction can be distinguished too. Just above Korošica meadow, south of it, a distinct peak rises, starting one of such side ridges. This is Lučki Dedec, a well known climbing playground of Kamnik Alps. Dedec has a steep north face, an almost vertical north-west wall, then in the ridge towards the south a grassy passage opens, called Durce, where the summit can be easilly ascended. Towards the south the summit sends a moderately steep slope, covered with grass and pine bushes. Towards the south-east and east there's a karst plateau, the slopes from the summit lower only moderately, first forming the eastern fore-summit and then lowering down towards Prag saddle. Over these slopes the ascent is also possible, only we need to find passages through dense pine bushes. In winter and spring tour skiing is also possible here.

As just above the hut Dedec's NW wall is rising, the mountain's importance really lies in climbing, although it is also a nice hiking goal and in winter also a ski tour goal. It offers nice views on Planjava, Ojstrica, Veliki vrh and other summits above Veža plateau and towards the south, where the mountain world is more opened. From the nearby Kocbekov dom on Korošica meadow it's really only a jump up to its summit - the altitude difference is only good 200 meters.

In 1949 an important page in the history of Slovenian climbing was turned in the wall of Dedec. In two autumn days Ciril Debeljak - Cic and Rado Kočevar climbed at that time the hardest route in Slovenian mountains - graded UIAA VI+.

Reaching Dedec's rounded summit, our view first flies towards the north, where just above the green, flat meadow of Korošica the sharp Ojstrica rises. We can overlook all the southern features of this mountain, its paths and also people standing on top. Towards the west,Planjava is very different - a broad, complex mountain, sending on this side two strong ridges - the eastern one towards Ojstrica, and from Srebrno sedlo on, the sharp, wild ridge of Zeleniške špice, running in a SW direction down on Staničev vrh and further on. Towards the south we see the edge of the famous walls, which are running from Dedec towards Vežica and the high karst plateau left of them. Two summits are rising out of this plateau: Vršiči, 1980m, and Vežica, 1965m. And finally, toweards the east we have a nice view on the mountains, rising from Veža high plateau. 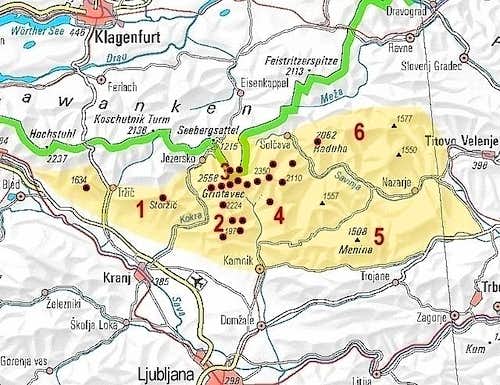 1. From the south-west. The trailhead is on the road into Kamniška Bistrica (valley), 1 km before the hut and the end parking place, 571 m, from where we reach either Korošica hut through the valley of Kamniška Bela and Presedljaj (saddle, 1613 m), or go directly on Dedec over Šraj peski. From the road around to the hut 4,5 h, directly on top 4 h.

2. From the east and south-east. By car we can reach Dleskovška planota (plateau). In Podvolovljek valley we take a decent macadam road, which brings us to Planina Ravne and the altitude of 1500 m. From the end parking place Korošica hut can be reached in 2h 30min. The second starting point can be the end of road below Planina Podvežak, 1400 m, some 500 m before reaching a hunters hut. The third trailhead goes from Lučka Bela valley, where we can drive up to some 1050 m and continue by the marked path towards Stare stale and Prag.

These are the options for a one-day ascent. Otherwise Korošica hut can be reached also from other directions, from Robanov kot, for example, or from Kamniško sedlo, when traversing the main crest of Kamnik Alps.

There are no limitations. The mountain is in the middle of a parc area. 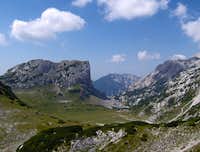