This outcrop near the north end of the area makes for some good bouldering but is now closed to it.

The Ledge Area is the northernmost (and easiest) section of the Little Stony Man Cliffs. It is delineated by a prominent blue-blazed tree right next to the trail (north end) and a large roof (south end).

There are four routes here that are excellent for people learning to lead climb, and some of them are good for climbers who like challenging scrambles that get into technical climbing.

The source of the names and ratings here is this excellent pdf guide by the Potomac Appalachian Trail Club (PATC) that you can download.

The Little Stony Man parking area is in the park’s Central District at MP 39 on Skyline Drive. If entering the park at the Front Royal or Thornton Gap entrance, drive south. If entering at Rockfish Gap or Swift Run Gap, drive north. Note that there is an entrance fee for Skyline Drive. In 2015, it was either $15 or $20.

Note-- Some boulders and outcrops near the northern end offer interesting bouldering and scrambling, and I have, in fact, done some bouldering there, but current management plans have made for the closure of this area to human activity.

This page's routes are near the northern end of the cliffs, where the trail bends left.
One can also hike to the top of the cliffs and then follow a feature called the Chute down to the base, but it is much faster and easier to use the Passamaquoddy Trail. The Chute begins north of the open clifftop area.

The routes are presented from left to right as the climber faces the cliffs.

Evergreen (5.7)-- Crux is at the start; the rest is basically a scramble.
Lichen Leadin' (5.2)-- This one is a waste of time with gear. I'm not sure this is even Class 5.
Half and Half (5.4)-- Easy but lots of good gear placements, so good for some practice and fun.
Chiminey Cricket (5.3)-- Two others who climbed this with me agreed it is more fun and also harder than Half and Half. Good gear placements when you need them.

For climbing notes on soloing Half and Half and Chiminey Cricket, please read the following text and study the photo below. Eventually, I hope to add some more photographs of these and the other routes.

Look closely, and you will see two entertaining but reasonably safe routes. Both are good for unroped climbers who are skilled scramblers. If neither route is to your liking but you want to do more than hike to the top, keep looking left for a nice Class 3 scramble. For that route, though, it’s better to approach it more directly from the big bend of the Passamaquoddy Trail below.

To approach the two climbs, clamber to a large, obvious ledge approaching the northern end of the cliffs.

#1 (Half and Half): Where the bright sunlight meets the shadow, there is an easy Class 4 upclimb to the small, vegetated ledge at center left. From there, climb up along the left side of the shadowed area to the base of the protruding rock that has a sliver of sunlight on it. Climbing the crack left of that rock to the top of the rock is the route’s crux and also its most-exposed pitch. After that, the summit is a quick and easy scramble away.

#2 (Chiminey Cricket): The center of the shadowed area shows what one might call either a large crack or a chimney. Climb it. It’s easier than it looks when you’re viewing it from the approach, but it feels a little harder (and more fun) than Half and Hal despite the lower grade. This spot receives little sunlight, so be prepared for moist, mossy conditions there.

My estimates for the ratings are a little lower than the established ratings. This could be due to subjectivity or due to the fact that I perhaps did not climb the full routes completely from bottom up and missed some of the harder moves. When I climbed here, it was well before I had any information whatsoever on lines and ratings here, and I was just messing around, trying to find interesting things I could do without roping up. 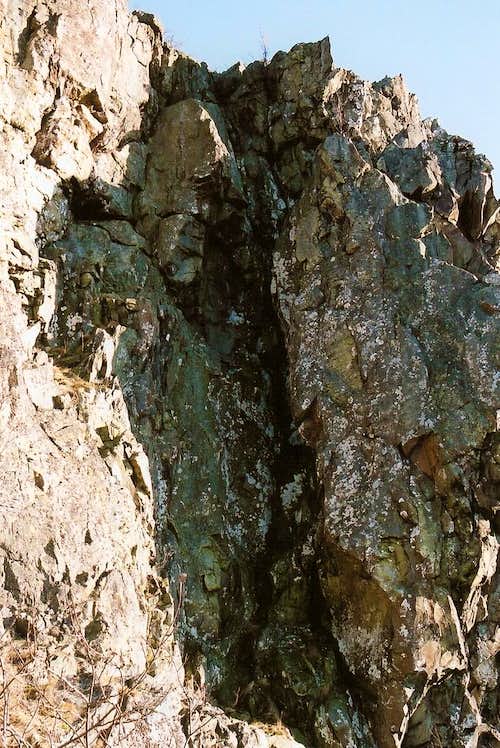 I used rock shoes, but you could get away with hiking boots or even hiking sandals with nice grip on some of the easier routes.

A set of stoppers and cams is all you need for any of these climbs. Doubles might be a good idea since you will have to build a gear anchor up top.