The Lego Block Area, named for a feature called the Lego Block, is near the middle of Little Stony Man and offers three nice leads in the moderate range. Each route is about 100'. Chimney in a Chimney (5.6) is definitely worth doing, with some good pro and some interesting moves.

A great source of information for this area and for Little Stony Man in general is this online PATC guide. 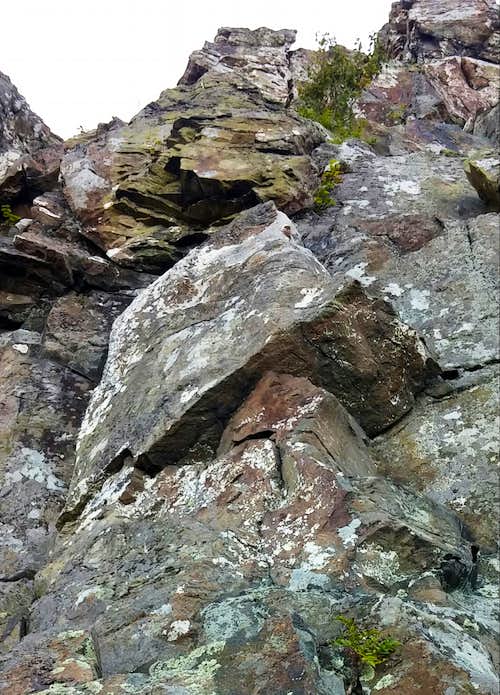 The Lego Block
Most climbing at Little Stony Man is trad, but toproping is possible. However, it's a hassle because it can be hard to locate the tops of the climbs from above and you will have to build a gear anchor (see Gear section).

The Little Stony Man parking area is in the park’s Central District at MP 39 on Skyline Drive. If entering the park at the Front Royal or Thornton Gap entrance, drive south. If entering at Rockfish Gap or Swift Run Gap, drive north. Note that there is an entrance fee for Skyline Drive. In 2015, it was either $15 or $20. To get directly to the base of the cliffs, hike on the AT to the junction with the Passamaquoddy Trail, which leads to a ledge offering a great view of the cliffs and then turns left to run directly beneath the cliffs.  Note-- Some boulders and outcrops near the northern end offer interesting bouldering and scrambling, and I have, in fact, done some bouldering there, but current management plans have made for the closure of this area to human activity.
One can also hike to the top of the cliffs and then follow The Chute down to the base, but it is much faster and easier to use the Passamaquoddy Trail. The Chute begins south of the open clifftop area.

There are three established trad routes here. From left to right:

A standard set of stoppers, hexes, and cams got me up Chimney and Lego Block. A #3 Big Bro is recommended if you do Bong Move.
You will need to build a gear anchor up top for the belay. There is a trail running across the clifftop, but it is against park regulations (and common sense) to have rope across the trail, so forget any notions of slinging some of the big trees across the trail with static line. 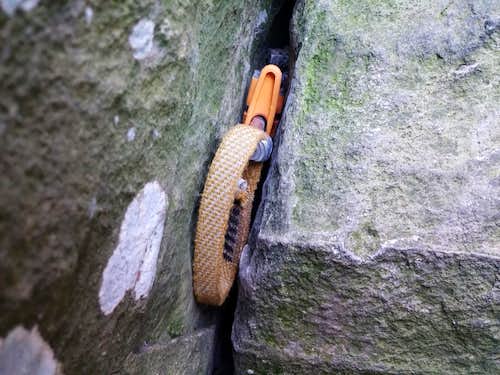