Making a New Friend in the Company of Some Old Ones
Wyoming, United States, North America

Making a New Friend in the Company of Some Old Ones

Anyone familiar with my submissions knows that I am hopelessly enamored of and addicted to the Greater Yellowstone Ecosystem. It might therefore seem strange to know that before 2009, I had only once been into the Wind River Range, probably the greatest alpine range in Greater Yellowstone. In July 2001, I spend a total of 11 days in the range, splitting the days among two three-nighters and some day trips. Yes, I had seen the range from roads and summits almost every year since 1997, but I’d only gotten physically into those mountains that one summer.

The reasons were threefold:

• The Absaroka Range, my favorite, exerted a stronger pull.
• There are not very many hikes and climbs to Wind River Range summits that can be done as day outings, and I really don’t enjoy backpacking.
• Regardless of my feelings about backpacking, it is a hassle (and now more expensive) to pack and haul camping gear when traveling by airplane.

It was time to get back, and some summits in the northern part of the range made appealing objectives since they could be climbed in a long day. Plus, those summits would be a redemption of sorts, for when I last passed them, both of my feet were a blistered mess and I had no appetite for any travel beyond what the trail required me to do.

The climbs would also provide the opportunity for fellow SP member and Absaroka nut Tim and I to finally meet in person; he was heading down from Powell for what would be his first tastes of the Winds and the Southwestern Absarokas.

We decided to climb Arrow Mountain, above the Old Glacier Trail and near the unnamed pass between Burro Flat and Williamson Corrals along the Glacier Trail (the pass has the unofficial name of “Arrow Pass”). After climbing Arrow Mountain, we still had enough interest and energy for another peak, so we traversed to the pass and then climbed Talus Mountain, the officially unnamed peak just west of the pass. Williamson turned out to be an enjoyable scramble with knockout views, and I thought it was overall the better peak even though Arrow provided a clear view of Gannett Peak and Williamson did not. But Williamson had amazing views of some awesome Winds wilderness that few see and fewer enter. 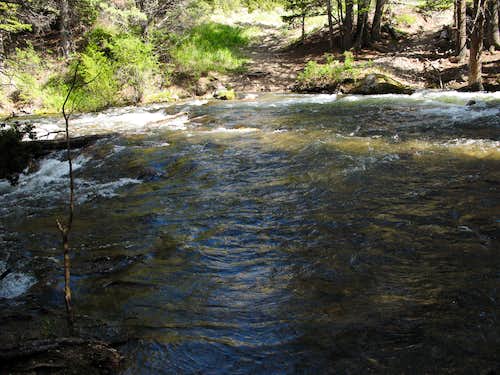 Crux at the start-- This ford of Torrey Creek marks the start of the Old Glacier Trail. The water was both high and swift, almost waist-high in places and with a current strong enough to make movement a struggle and even a risk. The afternoon before, we scouted the crossing and the immediate vicinity and could not find a better spot than the trail crossing itself. Aided by a solid fallen limb I found, I crossed over and back to check out the conditions. It was tough going, and I couldn't remember a harder crossing that I actually could do. Tim had never done a real stream crossing before, and I put out the idea of using the New Glacier Trail instead, but he was game to try the crossing since the Old Glacier Trail made for a shorter, more direct approach to Arrow Mountain. So we were back at the crossing early the next morning. The good thing was that the mosquitoes were still in bed; the bad thing was that the water was noticeably colder. But we got across, and the climb was underway. 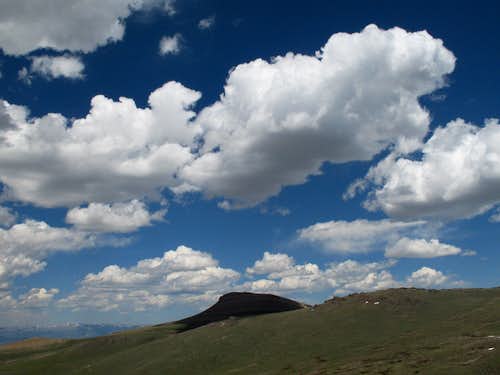 Arrow Mountain-- This view is actually from Talus Mountain, not from the approach to Arrow, but it was, lighting considered, the best view of Arrow I had all day. Our route took us up the face seen here, where we found a Class 2 break in the cliffs that gave us access to the summit. 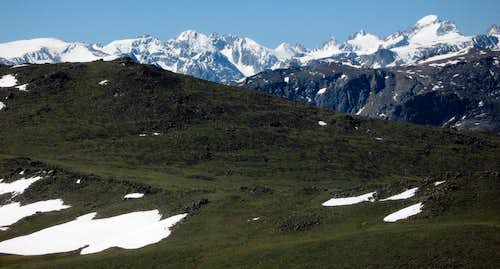 From Arrow Mountain-- The roof of Wyoming. Views from here were much better than I expected them to be; I thought Gannett, if visible at all, would look small and distant, but its distinctive shape and snowfield were anything but small and distant once they came into view. 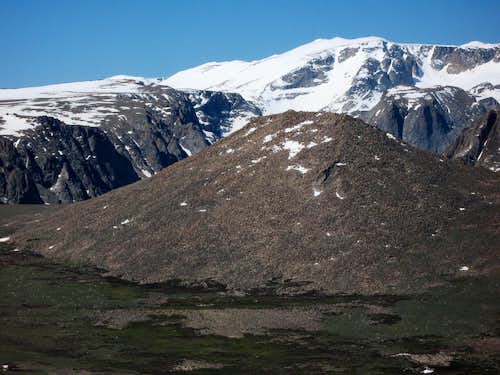 Next destination-- Williamson Peak. Thanks to Bob Smith, who wrote, "Looks like the great Cow of Heaven took a dump right there at the foot of those high peaks!" I will never be able to look at this picture quite the same way, but I must admit he had a point. This view is from Arrow Mountain; we both wanted to climb something else and enjoy different view, and Talus Mountain fulfilled those wishes very nicely. We hiked to the saddle just south (left) of the peak and then scrambled up the South Ridge. 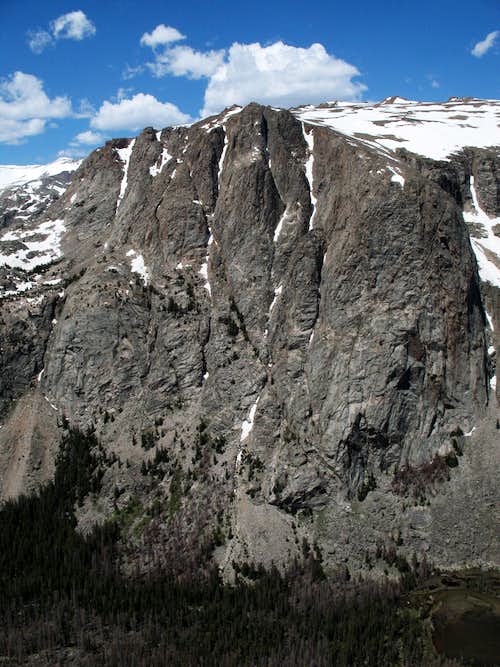 Torrey Peak-- A view worth the short detour. This is from an exposed ledge near the saddle south of Talus Mountain. Reaching the base of this face requires about 6 miles of hiking, some of it on an unmaintained, sometimes-marshy trail, but I imagine this face has still seen some ascents. You will not, however, have to compete with crowds, and if you are looking for a big wall away from the bustle of Yosemite and Zion, this might suit you perfectly. The face itself is about 1400 vertical feet, and the climb from the basin below to the mountaintop above is about 2200'. 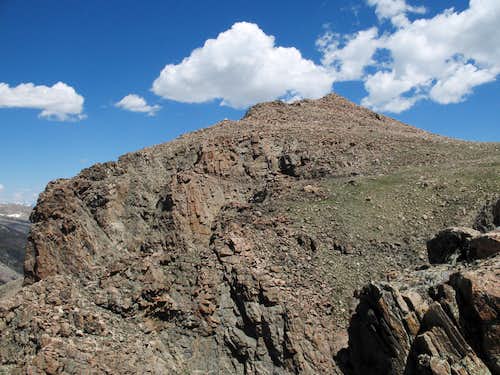 Talus Mountain-- South Ridge. It was a fun scramble up this ridge, and it was a pleasant surprise to find it getting more challenging as we got higher. With care, a climber can keep it at Class 2+, but taking the ridge on directly has a lot of fun Class 3 and even some borderline Class 4. The cherry on top of this sundae is a small summit boulder that is easy to climb but has barely enough room for two feet; it is not a choice spot on a windy day. The unexpectedly good scrambling and the astonishing views made this mountain that looks like little more than a rubble pile an excellent outing. 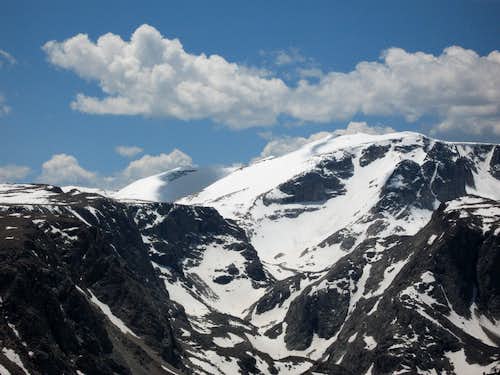 From Talus Mountain-- Downs Mountain. A view like this makes me reconsider my semi-retirement from backpacking. It will require most people at least two camping nights to climb this peak (easiest route from Goat Flat on the left), but the reward will be standing on the Continental Divide in a remote wilderness setting and seeing some of the largest glaciers remaining in the Lower 48 outside Washington. 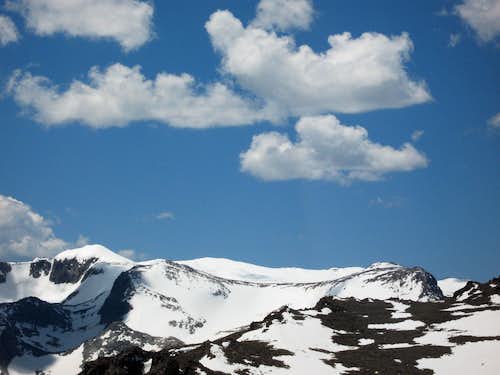 From Talus Mountain-- Gjetetind. This peak is part of the Downs massif and is a short distance north of Downs. It is one of the Northern Winds' several 13,000' peaks and is one of the most remote summits one can reach in the Lower 48. Of course, Greater Yellowstone is teeming with summits that are among the most remote in America, which is one of its myriad charms.

It was a pleasure hiking with you on this trip!
Tim