Named after the first explorer of the gulf of Saint-Lawrence, mont Jacques-Cartier is the highest mountain in southern Quebec, overlooked only by the high peaks of the Torngat Mountains in the north. It lies within the Gaspésie national park, in the heart of the Gaspésie peninsula, about 750 km from Montreal and 500 km from Quebec City. The Sainte-Anne river cuts the park into the Chic-Chocs mountains in the west and the McGerrigle mountains in the east, where mont Jacques-Cartier lies.
Along with its neighbor mont Albert, mont Jacques-Cartier in topped with extensive alpine tundra, not unlike Mount Washington or Katahdin. It shares a similar landscape, and sometimes also shares their weather and crowd. More unique however are the woodland caribous that live in the area; this is the best place to see the last remaining herd south of the Saint-Lawrence river.

To get to the Gaspésie national park and its visitor center in the Mont-Albert sector, drive through route 132 then 299, either from the north when coming from Montreal or Quebec City, or from the south when coming from eastern New England or Atlantic Canada. Matane and Campbellton are the last cities for camping supplies on either approach. Route 299 south of the park in quite scenic but has no service. From the visitor center, take park road 16 to the Jacques-Cartier campground.
As of 2017, for most of the summer, there is a morning bus from Sainte-Anne-des-Monts tourism office to the park's visitor center to the Jacques-Cartier campground (do reserve for the second leg), with a return in the late afternoon.
From the campground, one must then take a shuttle (fees apply) or walk to the trail head; private cars are forbidden there.
From Gaspé, one can drive directly to the Jacques-Cartier campground from route 132 at Mont-Saint-Pierre by a back road (route de la Rivière Mont-Saint-Pierre). 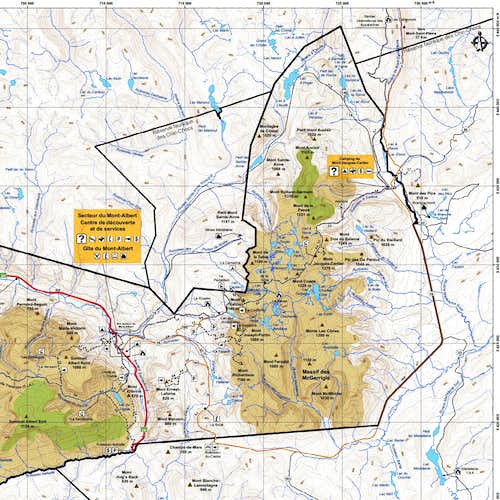 You will be hiking on the International Appalachian Trail (called Sentier de la Grande Traversée inside the park), which connects the Forillon national park in Gaspé to the Appalachian Trail at Katahdin.
The sentier du mont Jacques-Cartier is the most popular route by a large margin and not too difficult. For the casual hiker, it is an accessible way to experience the alpine environment and see caribous.
The western route is not advertised on the park's website, yet the experience is vastly superior. If you like challenges or have two days, the views, variety of terrain and absence of crowd are definitely worth it. You also spend more time hiking and less time driving.
The McGerrigle traverse combines both routes above and is an excellent alternative to the western route.
All these trails are shown in the cut map on the right. The entire map is available on the park's website and sold at the visitor center.
(My pictures on mont Jacques-Cartier proper don't do justice to its real beauty, so I have added links to pictures on the Internet.)
Sentier du mont Jacques-Cartier (normal route) 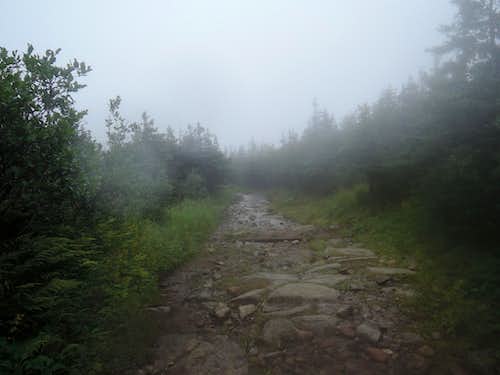 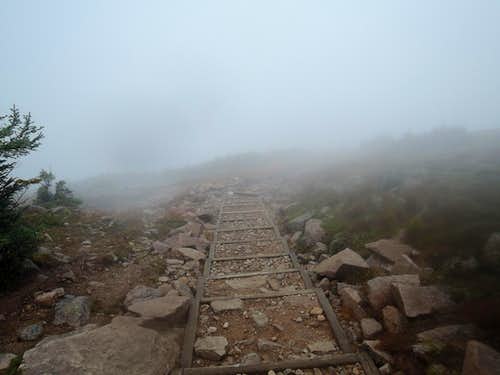 From the shuttle drop-off point, the trail immediately climbs at a sustained but tolerable rate. Much of it seems more like a sidewalk than a trail, as it is cleared down to the smooth bedrock (left) from an old road. About half way up, the trees start to thin out, and the views begin to open up.
Just below tree line, there is a short side trail to Lac à René. Soon after, the steepest part of the trail ascends on steps (right). The summit plateau is a jumble of boulders capped by a lookout. The faster you hike, the more chance you have to see caribous (crowds scare them); if it fails, consider doing the Boucle du caribou. 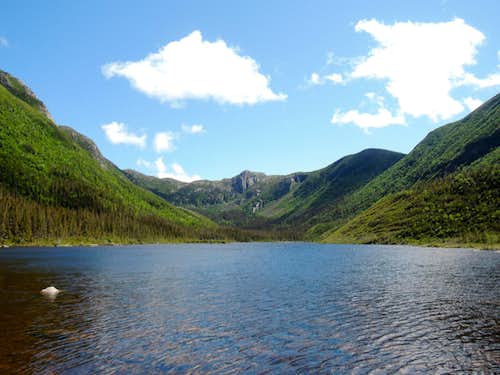 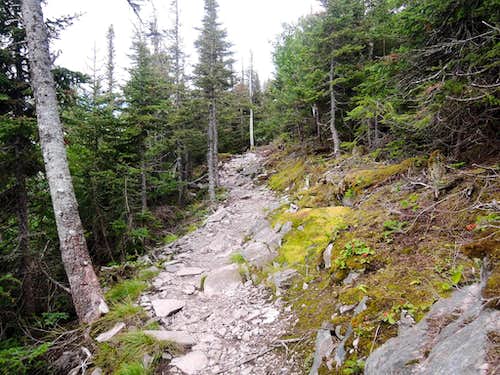 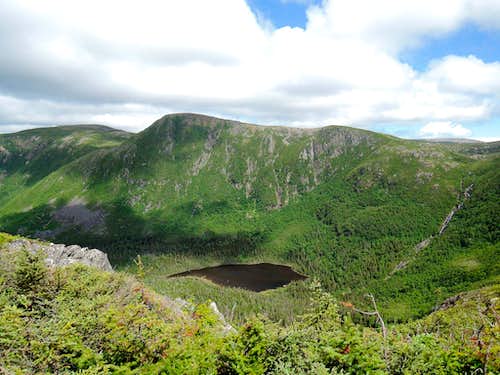 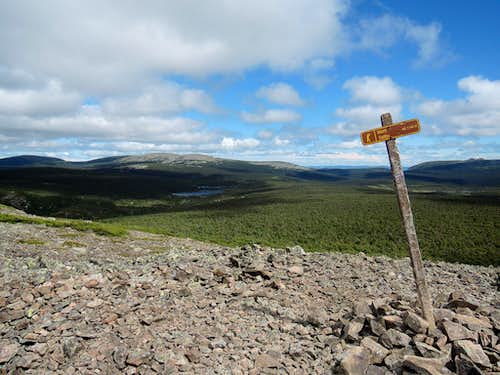 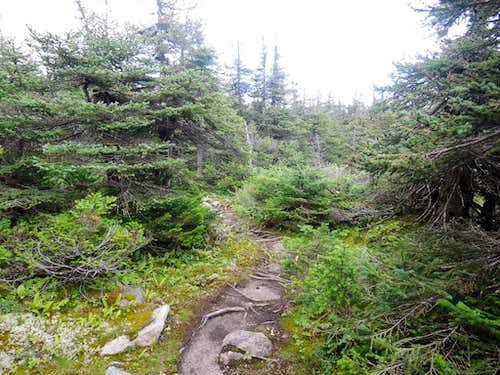 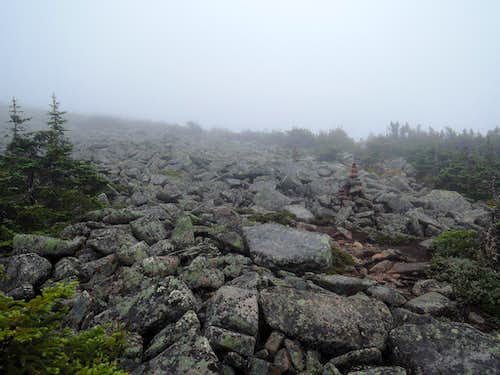 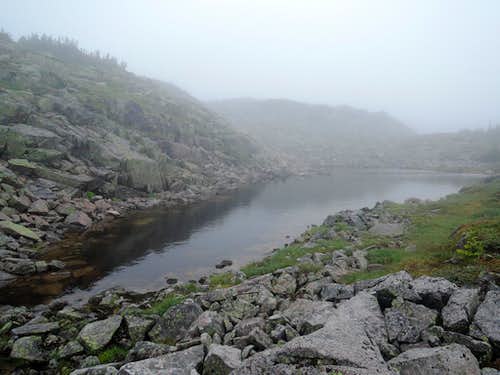 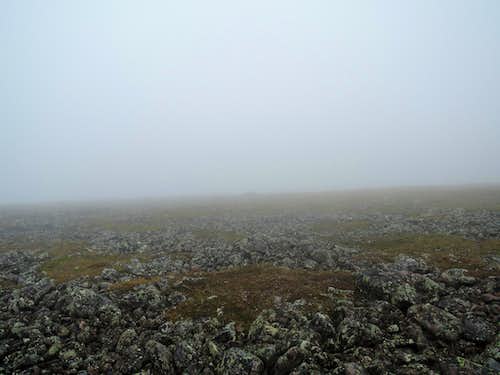 Take park road 16 to 160 to the Xalibu parking lot. A family-friendly trail leads to Lac aux Américains (left 1), a mandatory photo stop. The trail then becomes more rugged (left 2) and goes up and around mont Xalibu, with a nice view on a waterfall and mont de la Table (left 3). Tree line is cleared just before the short side trails to mont Xalibu's summit (left 4, mont Jacques-Cartier is the highest visible point) and to the Corniche viewpoint. Both are well recommended.
Descending back below tree line, the trail cuts through the plateau (right 1) between mont Xalibu and mont Comte. The Tétras hut provides a welcomed shelter if it is windy, cold or raining. After hugging tree line (right 2) for mont Comte, the trail goes around it by a cleft and reaches two alpine lakes (right 3) and the col to mont Jacques-Cartier. These places may be snowfields early in the season, but are rather flat and without exposure. A short off-trail scramble would be required to get to mont Comte's summit.
The trail then breaks tree line for mont Jacques-Cartier. Follow the huge cairns, which can be difficult in low visibility (right 4). Take a bearing if required, as off-trailing on mont Jacques-Cartier is forbidden. Similarly, you should respect the timings as per the red tape below.
12.6 km one-way, +882/-208 meters. We took 4 hours going up, including breaks but not stops.
McGerrigle traverse
One can traverse the McGerrigle massif by combining the two trails mentioned above. Most will extend the hike west to the visitor center on an easy forest trail, as it saves hitchhiking at the Xalibu trail head (which is easy too). Hiking westbound is easier as you start higher. Most people will do it in two days (see camping), but it can be done in one by fast hikers or in three as the park suggests.
When going eastbound, there is no out shuttle until early afternoon. We politely asked the driver of the 11:30 am in shuttle and he drove us out for free. We then hitchhiked back to the visitor center, and got our reserved bus seat refunded!
24.1 km, +771/-1353 meters, book time 10:30 westbound. We took 6:40 eastbound, including breaks but not stops.

One mission of the Gaspésie national park is to protect its population of woodland caribou, and mont Jacques-Cartier is their prime habitat. Therefore (as of 2017), access to the mountain is allowed only between 10 am and 4 pm, only between June 24 and September 30, and only on the trail, plus the hike must start before noon. So if you take the last shuttle in, eat before and move fast.
As for any national park in Quebec, a daily access fee must be paid.

The most relevant frontcountry campgrounds would be the Jacques-Cartier campground on the east side and the Mont-Albert and de la Rivière campgrounds on the west side. One step above, there are furnished huts and cabins in the Mont-Albert sector. For more luxury, consider the Gîte du Mont-Albert. Do make advance reservations. 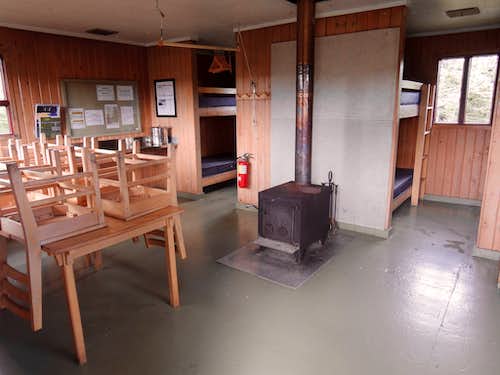 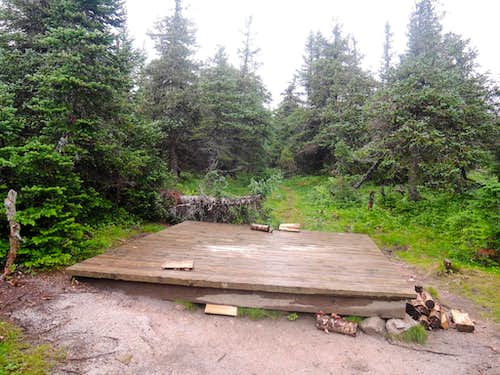 Camarine campground
For the McGerrigle traverse, most people will stay in the Tétras hut or the Camarine campground. Somehow, the park's website has no information on them... So here it is.
The Tétras hut is a modern wood building with 8 bunks, mattresses, fireplace, firewood, outdoor picnic table, indoor table and chairs. Filter water from Samuel-Côté lake nearby.
The Camarine campground has 4 wooden platforms sheltered by coniferous trees. There is no water and we found no stream where the map showed one to the east. So fill up at the Samuel-Côté lake or the alpine lakes (or snowfield) just before mont Comte. No fire allowed.
The refuges should be reserved well in advance, but campsites should be available for last-minute reservations. Reserve by phone and check-in at the visitor center.
Of note, the Camarine may be the only campground in the eastern North America above 1000 meters. While a 3-season tent is sufficient, consider your skills in case weather turns foul. The good side of altitude? No mosquito (we only brought our tent fly).

As any hike above tree line, a windshell or rain jacket and warm clothing are recommended. It can storm, freeze or snow any day of the year.
The park has a schedule of discovery activities at the summit of mont Jacques-Cartier.
There are outhouses at both trail heads, junction to Lac à René, summit, Lac aux Américains, both huts, and Camarine campground.
The visitor center rents some hiking and camping gear and sells limited supplies. The only restaurant around the park is at the Gîte du Mont-Albert.