This is generally referred to as the third highest named summit in the Laurentian tourist region north of Montréal, following Mont-Tremblant and la Montagne Noire. What distinguishes this mountain from so many others in the region is that it has two large, unspoiled open areas (i.e. no ski lifts or observation platforms) at the summit, which together provide fantastic 180 degree views, and with plenty of space for hikers to spread out and relax. 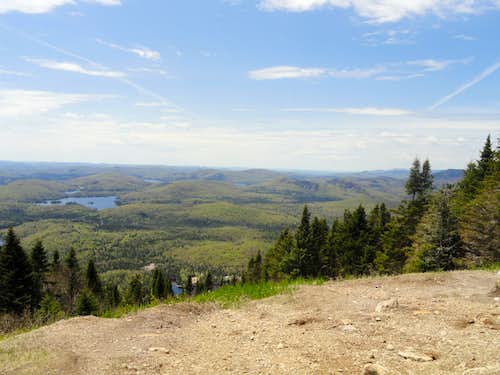 From Montreal, take Highway 15 north to exit 89. From there, take route 329 north towards St-Donat for about 19 km. After Lac-Creux, you will see a sign on your right for L'Interval; keep your eyes open because this can come up on you quick as you come around a bend in the road. Follow the signs about 7 km along rolling roads, the last few km which are unpaved, until you reach the reception at L'Interval, located on Lac-Legault. These last few km roads are not salted in the winter, so snow tires are strongly recommended. The driving time is approximately 90 minutes or so from Montréal, which makes for a relatively easy day trip from the city.

The summit is quickly attained by following trail 7 which starts a short distance from the reception at Lac-Legault. The 3.5 km long trail gains approximately 340 m in elevation, primarily in the last couple of km. Once the climb begins, it is a sustained climb until the summit. Though it is never excessively steep, there is rope in a couple of places along the trail to help the hiker, if needed. It is possible either to do an out-and-back hike, or make a longer (12 km) loop hike along trail 7 ("le grand tour"), though additional views on this option are limited.

The Base de plein air L'Interval charges $6 CAD per day (as of 2014) for access to its network of 40 km of trails which includes Mont Kaaikop.

The mountain can be hiked any time of year, though mud should be expected in April/May and bugs May/June. This makes for a nice snowshoe hike in the winter. Many of the trails at L'Interval are used for cross-country skiing in the winter. 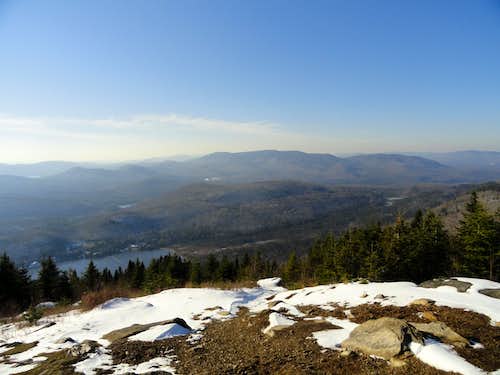 L'Interval may be closed in shoulder seasons of late autumn and early spring depending on snow conditions, so it is advisable to check in advance during these periods before going.

Rustic camping is offered at L'Interval on a first-come, first-served basis. Other lodging options are also available. Refer to L'Interval's website.