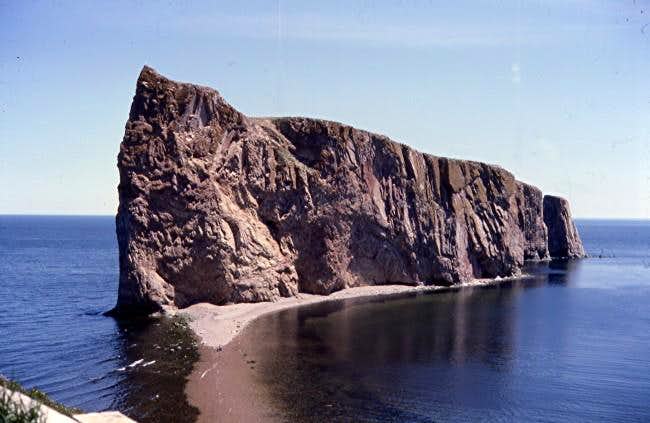 This rock is fairly unusual for eastern North America. It is the last point before the Appalachians disappear into the Atlantic so it is the most northeasterly of these mountains that start in northern Alabama and end in the Gaspé of Quebec. This area is fairly empty and has the best Maine lobsters in the whole world. They are gigantic and were less expensive then in Maine. The Gaspé Coast is a very rewarding drive-probably comparable to the California coast south of San-Fransisco but with more trees and a population density like Montana. Francois I sent Jacques Cartier to Canada in 1534 and Cartier put his ships up behind Percé Rock to ride out a big storm in the Gulf of Saint Lawrence. It is not recorded but there is a possibilty of a first non-indigenous climb of the Appalachians at this time. Meaning: pierced rock-see the hole on the Atlantic side? Pronounce as in Latin idiom in English "per-se" Looks as if you could work on some intense roofs coming out of the big hole on the seaboard side. Could make for some great pix if the surf were up.

You can drive to this one on the Gaspé highway. We started in Quebec city, drove south across the bridge to Levis on the same cantilever bridge where there was a big accident during its construction- one section levered into the Saint Lawrence as I heard it. We then drove serveral hundred miles northeast on Canada #20 or Quebec #132 to the end ot the Gaspé . Percé Rock is basically the end of the road. My map says it's 500 miles from Quebec City to Percé Rock following Quebec route 132.

None that I am aware of. There might be some restrictions on the rock due to large numbers of nesting seabirds?

Probably the summer. It would be quite hard out of season because you would freeze your feet in the Ocean.