Monte Colombo is an elegant rocky mountain situated in the southern sector of the Gran Paradiso Group. It’s summit is probably one of the most frequented of the southern valleys of Gran Paradiso Group, thanks to the visibility from the plan of Canavese and the relatively easy normal route, moreover in August, on its top there is a religious feast with presence of most of the inhabitants of Ribordone Valley and many vacationers. All its sides are steep, the north wall falls down in the impervious Lazin Valley (a branch of Forzo Valley) while the southern slopes belongs to the Ribordone Valley of witch is the highest elevation.
From the top, the view ranges from the Pianura Padana to the Penine Alps and is particularly spectacular the view to the S and E wall of Gran Paradiso.
Thanks to the solid rock (gneiss) the climber can find some interesting rock climbing routes, rarely climbed.

By car
From Torino to the south side: Road “S.S.460” towards Cuorgnè and Ceresole Reale as far as Pont Canavese, Sparone, then turn right and drive along Ribordone Valley as far as the small village of Schiaroglio.
To the north side: Road “S.S.460” to Cuorgnè, Pont Canavese, then turn right and drive along Soana Valley as far as Ronco Canavese, turn left and drive approximately 3 Km along the wild and deep valley of Forzo up to the sign to the trail to the Lazin Lake in the homonymous valley.
From Milano: Highway A5, take exit “Ivrea” and follow the road towards Ceresole Reale as far as Pont Canavese. Then follow the previous itinerary.
By train/bus
Local train “GTT” from Torino to Pont Canavese, then buses to Ronco/Forzo or Ribordone.

Normal route
Height difference: 1500m
Ascent time: 4 hours
Difficulty: hiking with some easy rock passage
Note: The pathway is indicated by red tags and “1” painted sometime along the way
Starting from the car park of Schiaroglio (1360m), follows the path that start from a small white church. Walk initially between the houses of Schiaroglio, then pass through a forest, crossing the Village Pianè (1470m), then Pian Crest (1860m) and Grangia Mandetta (2003m) then reach the SSE ridge (2663m), follow its watershed up to the base of the final rocky slope. Climb some passages of I along the last 30 meters before the summit cross.
Descent: along the ascent route
In winter, in case of abundant and safe snow, this route can be followed to get Monte Colombo by ski (difficulty: steep snow slopes and rock passages on the final 30 meters).

1) NW ridge. Park the car at Schiaroglio, follow the same path of previous itinerary then, arrived at Pian Grangia Mandetta (2003m) turn left and walk in a stony valley towards the pass “Bocchetta Lazin”; arrived at the small lake under the pass, follow a oblique cornice that reach the aerial NW ridge. From here climb it up to the summit (IV+). The rock is a solid gneiss.
2) N spur. Park the car in correspondence of a bridge called Crest crossing the Forzo river in the homonymous valley. Go over the bridge and follow the signs to Lazin Lake. From the lake, take left (no path) and reach the base of the spur, then climb it (IV). The best glide route reach Bocchetta di Ciaval and descend along a steep but not dangerous colouir without difficoulties, up to Lazin lake.

Hiking/climbing: from June to November; usually autumn is more dry so it’s recommended. Ski-mountaineering: March and April (depends from the snow conditions). 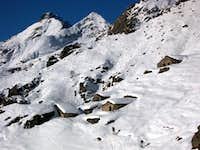 Within the borders of the PNGP (Parco Nazionale del Gran Paradiso) dogs generally are not allowed, except on a pair of trails, and camping is forbidden (except above 2500 m from sunset till dawn). No fees are due.
Further details at P.N.G.P. official site.