The Gran Paradiso Group is a range mainly famous in reason of its Northern high and icy mountains. In its Southern side the massif hides another wonderful kingdom, less known, made of steep granite walls and beautiful hard rock climbs, both classic and modern. In the middle of this Gran Paradiso rocky heart it's situated the Piantonetto Valley, a tributary of Orco Valley, one of the best known sites in the Southern side. Piantonetto is home of a veritable pearl, the magnificent peak of Becco Meridionale della Tribolazione. It's the Southernmost mountain belonging to a group of three ones, Becco Settentrionale, Becco Centrale and Becco Meridionale della Tribolazione. It's the finest mountain amongst these ones and probably the most beautiful rocky summit of Gran Paradiso group, together with Becco di Valsoera. This peak has an unmistakable trapezium shape and it's quite famous in reason of its stunning South-East face, dropping up to 500 m. The steepest section is a 250 m. high wall, showing wonderful corners and cracks, rising on a 250 m. high sloping pedestal. The rock is a gneiss of excellent quality, greenish coloured in the lower section, reddish in the steep upper wall. This peculiarity emphasizes the sudden change of inclination of the face.

Winter scenery in high Piantonetto - Becco Meridionale on the left

The starting point to climb is the Teleccio Lake, at the end of Valle del Piantonetto, a tributary of Valle dell'Orco.

- From Torino reach Courgnè and Pont Canavese m. 461; from here follow Orco Valley as far as Rosone m. 715 (Km. 16,5 from Pont Canavese). A few hundred meters after Rosone leave the main road and follow on the right-hand side (road marks Piantonetto-Rifugio Pontese) the narrow road rising along the Piantonetto Valley and reaching the Teleccio artificial Lake m.1917. Dam. Parking.

- From France and Switzerland reach Aosta, then follow the Monte Bianco motorway towards South, exit Ivrea. From Ivrea follow the road to Ciriè and Pont Canavese.

The approach to the Becco is rather long and with a considerable difference in height. It is possible to stay overnight at the Rifugio Pontese and reach the wall from the shelter, reducing the approach even if not by much. From the large parking lot at the end of the road near the Teleccio Lake there are two possibilities:

- direct approach: cross the dam and take a path that runs along the left shore of the lake and then start to rise through rocky ground and meadows (cairns and red smarks, path sometimes not much obvious).

- through the Rifugio Pontese: follow the flat dirt road running along the right shore of the lake, then a steep path rising quickly to the Rifugio Pontese m. 2200 (45 minutes from the parking), guarded in summer.  Take the path at the back of the shelter that descends slightly to the left and crosses the stream on a wooden bridge. Continue along a well-trodden path (red-white signs and cairns), finally reaching a scree rising up on the left. Follow the scree and before starting to climb towards the Colle dei Becchi (on the left of the Becco della Tribolazione)  deviate decisively to the right, crossing the blocks, from where you go up towards the SE wall.

All the routes of Becco Meridionale della Tribolazione (French Scale)

Other routes - SSE Ridge and SSW Ridge  Gambotto-Piazza 4b max, The route is running between Pin Up and Bicentenario GASP 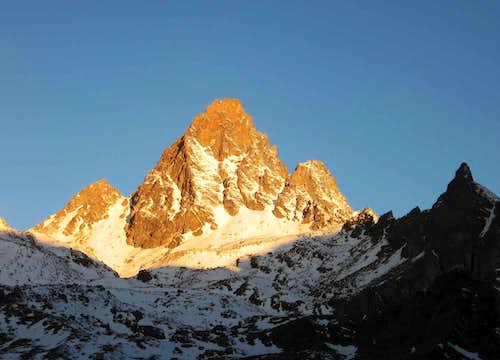 The Normal route runs along the SSW ridge and the SW wall  - PD, II UIAA with some moves of III

It's the itinerary of the first summiters of the tower - L. Vaccarone, A. Castagneri and A. Boggiatto 1875
The route starts from Colletto dei Becchi. The climb is on solid rock, fun and not difficult.  At times it follows the SW ridge and sometimes the W side along ledges, short dihedral and chimneys.  The approach is the same as for the routes on the SE wall. Once you reach the base of the mountain climb up the steep slope on the left of the tower to reach the Colletto dei Becchi where the climbing begins.

The best period to climb the peak goes from middle June to middle September. The sun remains on the wall till middle afternoon.

- Rifugio Pontese at Pian delle Muande 2200 m (guarded by “Gran Paradiso Friends” Association) open in summer (40 minutes from Lago Teleccio) - Hut phone +390124800186 Other accomodation in Valle dell'Orco Different Kinds of accomodation can be found in Valle dell'Orco. The only existing equipped camping is located in Ceresole Reale in the upper valley. In Noasca, the village located near the Piantonetto road, it’s possible to find some accomodations in the Ostello and Hotels.

There are no fees or permits needed to climb Becco Meridinale della Tribolazione. The peak is located inside Parco Nazionale del Gran Paradiso, established in 1922, one of most important National Parks in Italy. You should take care of nature as usual within the boundaries of all the natural parks. Free camping is not allowed and fires are strictly forbidden. The whole fauna and flora are protected. Don’t disturb fauna and other mountaineering and hikers’ peacefulness with every kind of noise.