It is one of the most overshadowing and highest mountains of Maritime Alps and is well observable from part of “Pianura Padana”, especially from Cuneo area.

From the summit the panorama is magnificent, in fact in a sunny and dry day, the view ranges from French Provence to Swiss Alps (Valais), to Central Alps and Apennines of Toscana and Liguria.

There are three different summits: East (3088m), Central (3097m), Cima Bobba (3079 m); even if the East summit is not the highest one, it is the most climbed, because easier to climb than the others. 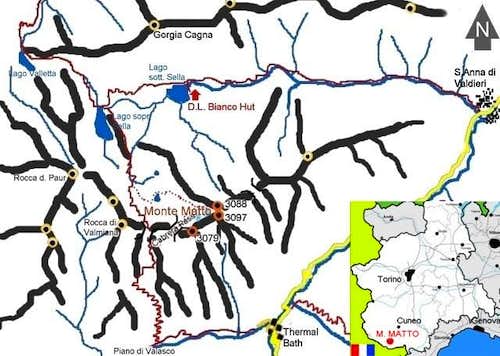 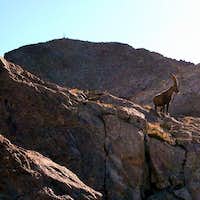 All its sides are in italian territory, it overtops the Gesso Valley and is included in the beautiful Argentera - Maritime Alps Natural Park.

Thanks to the position in the Park the hiker can watch many chamois, alpine ibex, birds, and other animals.

Below the summit there are the remains of a small glacier that is fast-fading due to the more and more high temperatures of last years; probably it will disappear completely within not many years.

By car
Coming from North, take the Torino-Savona motorway and exit at Fossano; from here take the SS 231 road to Cuneo, then the SS 20 road to reach Borgo San Dalmazzo, From Borgo S.D. , following the SP 20 up to the Gesso valley up to the thermal baths of Sant’Anna di Valdieri.

Coming from From Nice (Fr) and Ventimiglia, take the Tenda Pass SS 20 road towards Limone Piemonte to get Borgo San Dalmazzo and follow the previous itinerary.

Coming from Genova: take the motorway to Savona, then motorway Torino-Savona motorway and exit at Mondovì, then Cuneo and join the first itinerary at Borgo San Dalmazzo.

By train
Using the Torino-Cuneo-Ventimiglia you can get off at Borgo San Dalmazzo station and take the bus.

By bus
There are several buses a day to Valdieri run by the Società Nuova Benese (Tel. 0171/692929); terminus: piazza Torino in Cuneo; main stops: Cuneo and Borgo San Dalmazzo railway stations. From Valdieri to the Thermal bath of S. Anna di Valdieri there is a seasonal bus service.

By plane
The nearest airport (30 km) is Cuneo-Levaldigi, from which a limited number of national flights leave (Tel. 0172/374374). The international airport Torino-Caselle and Nice airport (France) are 100 km and 130 km away respectively.

The easiest route starts from Sant’Anna di Valdieri (1010m) and follow the Meris valley up to Rifugio Dante Livio Bianco (1910m); from the hut proceed on the footpath in the direction of Valmiana pass. As soon as arrived at 2456 m. in correspondence to a big stone, walk out on the way and turn left following an uncertain trace (marked with red tags) between stones; the last slope, before the east summit, is steep. 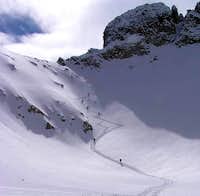 This is also the ski-mountaineering normal route in late winter (danger of avalanches).

Height difference: due to the many meters to ascend (2175), almost all the hikers divide the route in two parts 900m from S. Anna to the hut, 1275 m from the hut to the summit.
Difficulty: easy hiking (pay attention to the final steep slope) 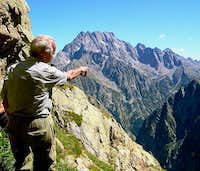 South side has many ridges where is possible to find many routes, rarely climbed; their difficulties start from F to TD+ (UIAA scale). Moreover, in the same side, there is a very steep coulouir, sometimes descended by ski, when the snow conditions are safe (February to April); more information available at www.gulliver.it (Italian).

From June to November From February to May as skitour

There is a camp area close by the car parking after the thermal bath; it should be managed by the Park. 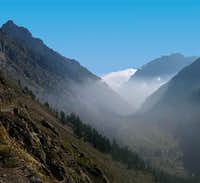 Twinned with the French Mercantour National Park since 1987, it preserves an alpine area of 100,000 hectares which was awarded the "European Diploma for the Environment" in 1993.

Within the borders of the Argentera Park dogs generally are not allowed, except on a few trails, and camping is forbidden (except for emergency situations). Off road Mountain biking is allowed. No fees are due.

Could be useful to check the weather forecast for France:

Thank you. I didn't check the position...

I think this topo is WAY off. Most Italian peaks are between 6 degrees and 7 degrees longitude. This is near Asia! 71.5°E