Mount Baker at its best

It was the summer of 1992 and I was on a mission. I was back in my old stomping grounds for a brief time and wanted to make every second count. Climbing a mountain was always on my mind, especially one that I'd never attempted before. My brother Bill and I set our sights on spectacular Mt. Baker, whose shiny white cone beckons to the north from Seattle on clear days. We settled on the the Coleman-Deming route for the sake of time. It offered the quickest approach, the least amount of objective hazards and the most likely successful outcome. We were psyched!  With heavy packs we hit the trail to Heliotrope Ridge intent upon pitching our tent before sunset somewhere up there. 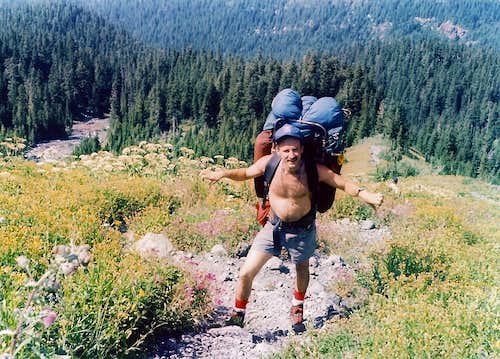 The snout of the Coleman glacier suddenly came into view as we rounded a lazy shank corner in the trail. It was at about 5,500'--fairly low, I thought. Last year must have been a good one for snow. The snout looked very dramatic---very broken up, in fact, the Khumbu Icefall came to my mind. 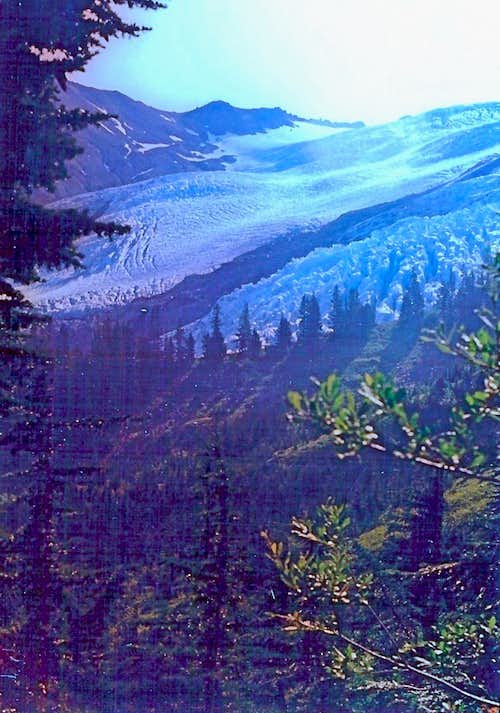 Just before arriving at the ridge above another 500 vertical feet, we encountered a small rag- tag collection of tents and asked one of the occupants why they weren't on the ridge itself to get even better views. "Way too much wind. You guys are better off down here too." Thinking about it, their idea was better than ours. We could easily scamper up there to take plenty of sunset pictures after our tent was pitched, soggy T-shirts laid out to dry on the rocks, and water collected from the adjacent morrain pools. 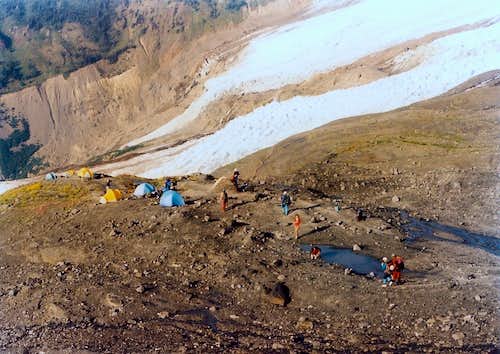 We had a leisurely dinner and were in sleeping bags by 8 PM. Excitement-- more than trepidation, highlighted our conversation for the next hour. The hike up here, the clear views of the peak above us--everything so far had been picture perfect. But this was a serious commitment, a no nonsense mountain. Lots of deep crevasses and slippery ice lay between us and the summit 5,000 feet above!    SUMMIT MORNING:    Our plan was to leave the high camp at 4 AM to give us plenty of time to summit and descend before the snow softened too much. In the 3 AM darkness we fumbled around, getting dressed, rearranging gear, and heating water to fill poly bottles. It was already 4:15 when we finally committed to the ominious ice fields above by lacing up our crampons. After a few strides though, our game faces returned and any foreboding feelings about what may lie ahead dissipated into the star lit sky above. We were both once again in our element and it felt good. We scanned the ice at our feet with headlamps looking for the poke marks of oher crampons in the hard ice indicating  the route. Soon we noticed the sky was brighter. We turned off the headlamps and our pace quickened. Here and there, large fissures had opened up in the ice clearly telling us that we were now on the Coleman itself. 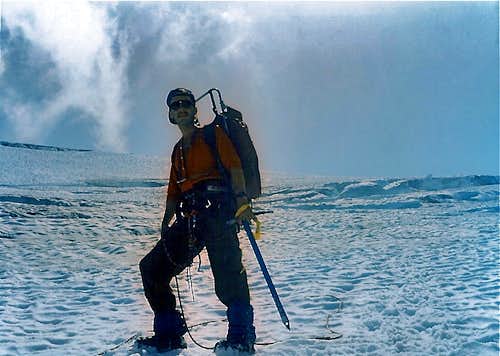 Time to rope up for sure. Picking our way through an emerging maze of crevasses would become the theme of the next several hours. We crossed an occasional snow bridge and hopped a few less dramatic cracks. As more daylight unfolded around us, so did the beauty. What a priviledge to be here, I thought--to want to be here! 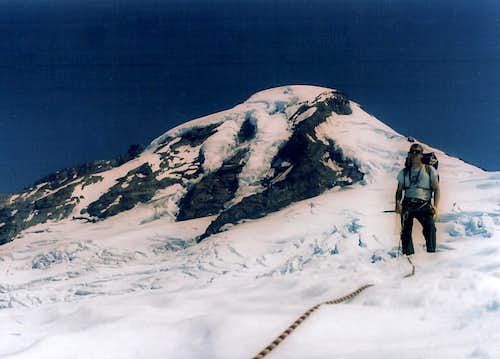 The unsurpassable beauty in every direction did however work against us in one sense. We stopped to take more pictures than normally we would have in less dramatic surroundings. 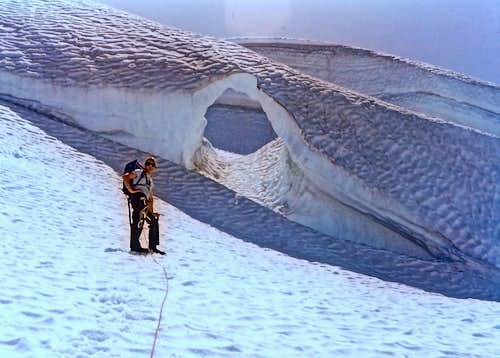 I found it hard to resist though. 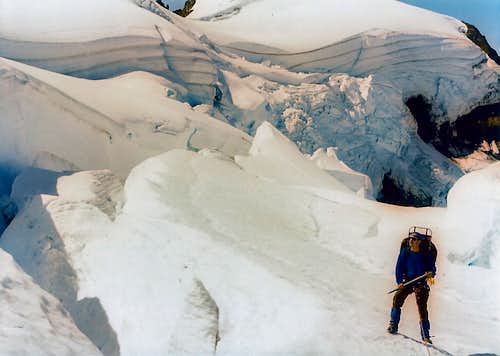 Despite the time taking photographs we were making good time, gaining fifteen hundred feet an hour. Before long we arrived at our first intermediate goal, the col dividing the Coleman and the Deming Glaciers. This "col" was more like a rocky cleaver, at least in August. We were off the ice for the first time in a few hours. The ice resumed a few hundred feet above so we elected to keep our crampons on. To the west the view opened up of the Twin Sisters range. 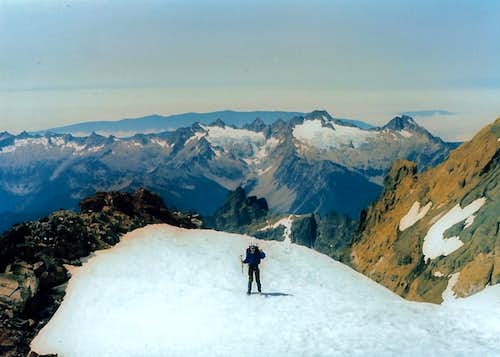 The piece of the route before us now was the crux in my opinion.  It was the steepest stretch of the whole climb, topped out by the unknown condition of the feature called the Roman Wall. 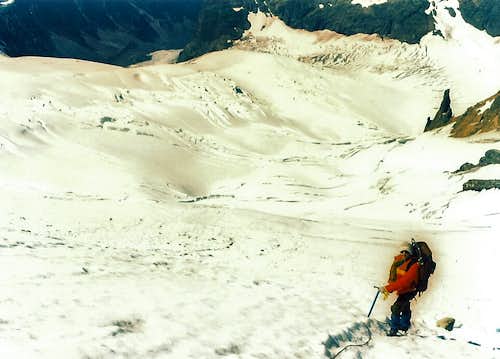 So as the Deming fell away precipitously to our right with the headwall of the Coleman to our left, we summoned an extra dose of nerve and climbed on, paying greater attention to glacier climbing detail:  some slack in the rope, ice ax in the uphill hand, kicking good steps, planting feet firmly, etc. Fortunately we found an easy gap in the crumbling Roman Wall and soon were on top of it.  Pheewww! We could let down our guard a little. 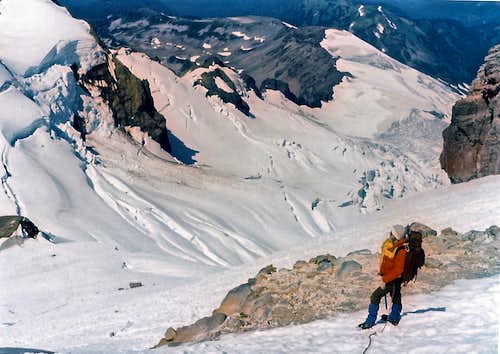 The summit plateau lay before us, hardly a ripple in it all the way to the high point in the distance. 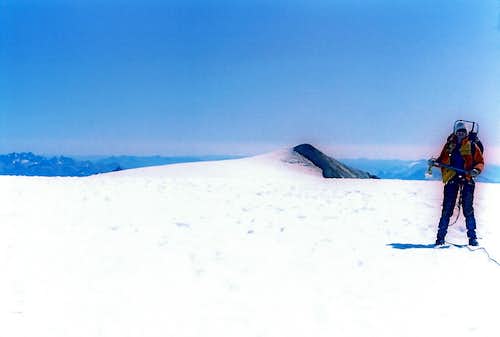 Fifteen relaxing minutes later we crested the little nubbin and sat down together at 10,778' on the top of Mount Baker! 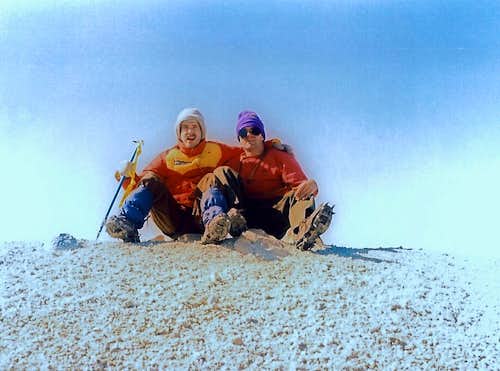 From there we got an excellent view of new ash on the icecap in the adjacent Sherman Crater, reminding us that this volcano is merely slumbering for now. 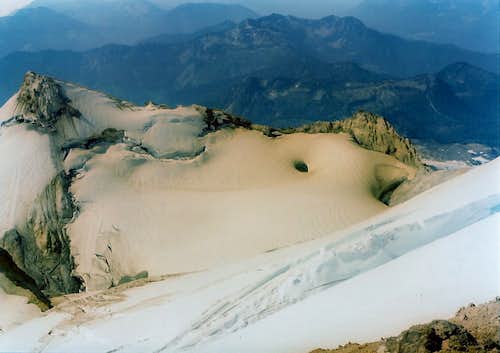 We both signed the summit register, highly appreciative of the honor to be there! 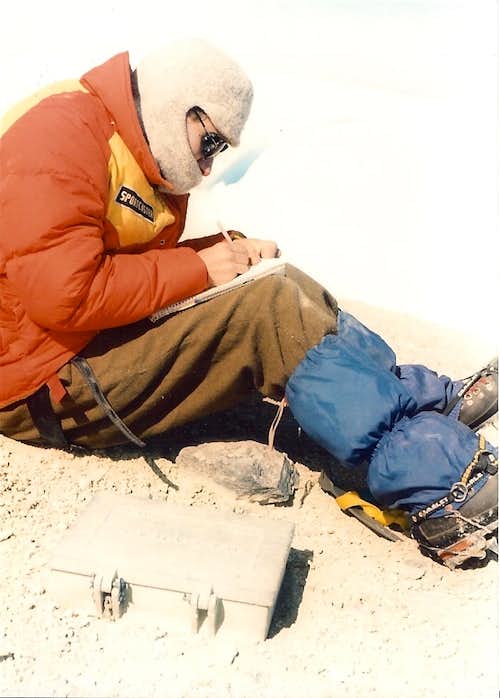 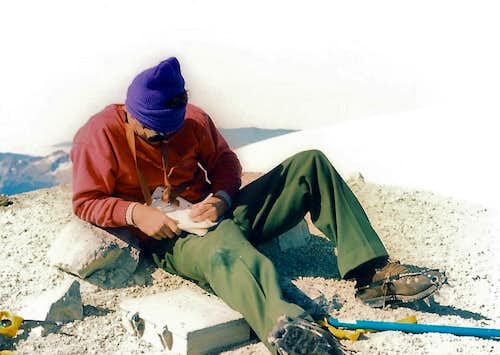