"Adventure isn’t hanging on a rope off the side of a mountain. Adventure is an attitude that we must apply to the day to day obstacles of life -- facing new challenges, seizing new opportunities, testing our resources against the unknown and in the process, discovering our own unique potential" -John Amatt

Despite getting caught in a White Out on this adventure, we all had a great time and many scenic moments along the way before the weather turned bad. It's trips like these that make climbing volcanoes exciting and not just a casual hike up to the top.

After just doing a 30 mile backpacking trip, Collin invited me to go climb Mount Baker. "The fun does not stop here" I laughed as I was getting my gear ready. Michael and I checked the forecast which looked very nice making it seem as though there was little chance of getting caught in bad weather. But as usual the weather on this side of the world is hard to predict, especially in the mountains. The next morning we all practiced crevasse rescue together as a refresher. Then we went on over to the Heliotrope Trailhead of Mount Baker. 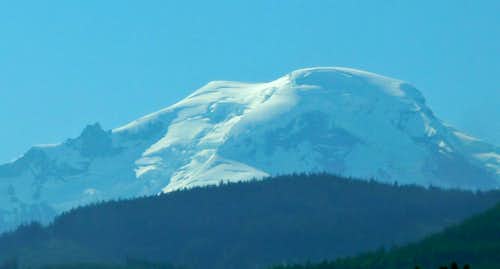 Mount Baker on the Way

At the trailhead it was time to get ready for adventure. When we started hiking, I already felt my blisters from the previous trip hurting with every step. I instantly thought "This is going to be a tough trio", but then I loosened my boot and it suddenly got a lot nicer on my feet. From here I had the opposite thoughts, "this trip is going to be as casual as it gets"... or so I thought. We passed a few water falls, got a nice view of the Baker Seracs, and to my amazement were already at the Coleman Glacier. 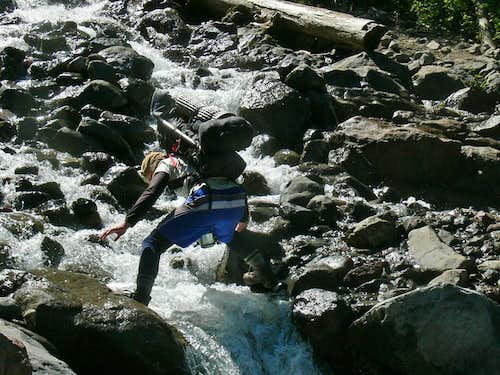 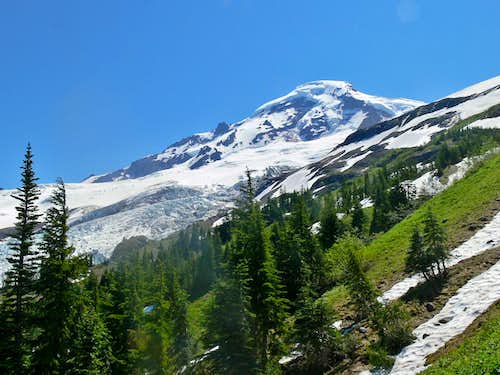 Mount Baker from the Woods
Going up the slope for me was fun, as we kept walking, a helicopter flew over, I guess they don't call it heliotrope ridge for nothing. A while later we crossed a mostly flat section and were already at base camp, in total it probably only took 3-4 hours (with us taking our time). At Camp the place was nice, it was not cold, had an interesting spot I call "The Window" because you could take photos through a narrow rock pass of the Twin Sisters. Michael and I hiked up to Point 7200 to get a good view of Colfax Peak, I could see now that clouds were rolling in. I figured they were just passing clouds.

Shadows over the Coleman Glacier 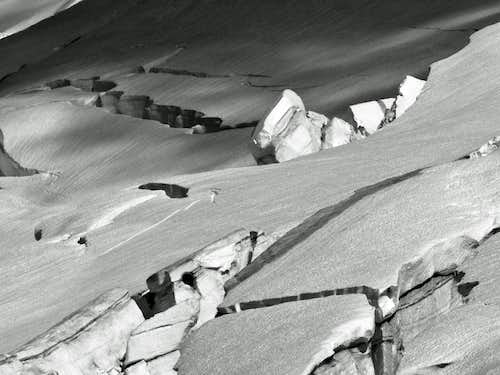 Crevasses on the Coleman Glacier 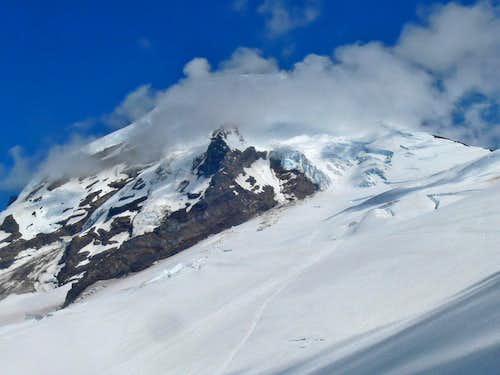 Mount Baker clearing though the Clouds 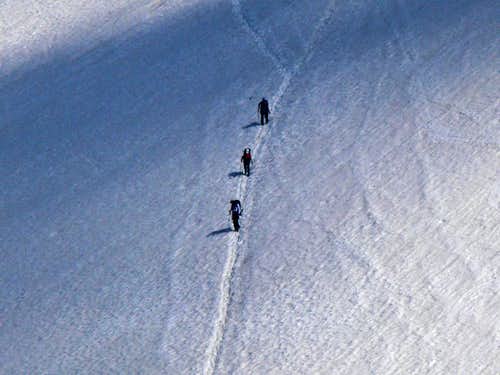 Climbers heading down Mount Baker
Once we got back to base camp we cooked some food, boiled up some water, and I had a talk with a guide. They said they just climbed the North Ridge which I want to do some day, but plan on having practice ice climbs before then. Collin whipped out his cigar (he rarely ever smokes) and we got a photo for my cover of "The J-Team". After this we watched the sunset and went to bed. 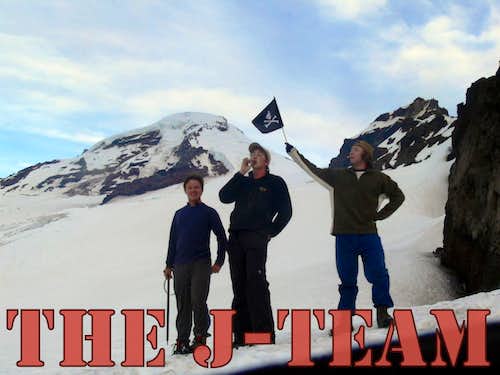 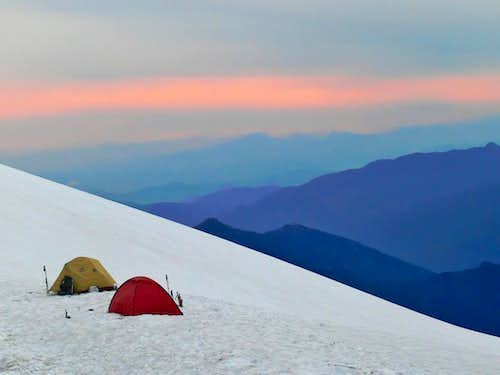 Base Camp during Sunset

Getting Into a White Out

Fortunately we kept waking up in the night because we did not have an alarm. At 3:30 a.m. or so we decided it was finally time to wake up and get climbing. We decided to put Michael on lead because he has never gotten a chance at it. As we go up, we pass a 2 person rope team which was nice to know we were not the only ones going up. As we climbed up, there was some faint morning light coming through, but at the same time there was some clouds coming in from the West. I started to wonder at this point if they would interfere with the views above.

Once it was dark blue out, I loved the atmosphere of the place, it's almost like I imaged misty days in the mountains, crevasses to the left, dark mist to the right. As more mist rolled in, the view of the mountain was out, we were now in fog. As we took a break the other team passed us, and I could hear dripping noises of the crevasse near by. It sounded like music, I was impressed by how nice it sounded, perhaps one of the strangest moment I've ever had in the mountains. Then we preceded on to the pass.


From here there were some winds that started to come about. As we went further, the winds got heavier as we gained more altitude. I eventually had to layer up in everything I had because it was just getting to cold. Earlier it rained a little, but now I could see that it began to snow. "This could be bitter sweet" I thought as we went up, I liked the feeling of the place, but at the same time I wanted to reasonably proceed to the summit. 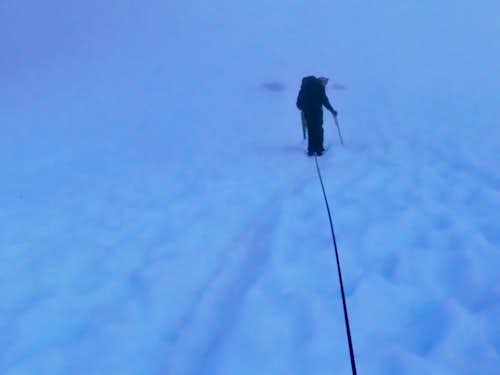 Climbing though a White Out
The winds started getting even heavier, and I became quite cold, my hands were starting to go numb as well as my feet. We reached a giant flat zone which I knew exactly where we were. We were close to the summit. Stopped in front of us was the other team, and they had no idea where to go. The boot path was gone, our tracks we starting to blow away. One of the guys mentioned he had a gps which made me feel better. I knew from last year where the summit was. I found a snow shelter which was a hint that I was going the right way, then I found the faded tracks from the Easton Glacier route, and soon found the mound that was the summit.

When we reached the summit, we did not stay long, perhaps 2 minutes? The winds were at least 50-60 miles an hour, and we were getting pelted with ice which was painful. This was the second worse conditions I have seen in my mountaineering. We tried to get off of the summit area as fast as possible. We were following the other group which it seemed as though it were the right direction, but we still were too far south. As we descended, we found a crevasse that cut across the path. "I don't remember this!" we all were thinking. I instantly realized this was the Easton Glacier trail, which if followed we would be on a completely different side of the mountain. I asked the other group to check there gps. Unfortunately the gps ran out of power. "Typical situation" I thought as I fortunately knew the general direction in which to head towards.


We traversed going North which was working out, but there was some some what deep snow involved. We passed a crevasse or two, but my main concern was I did not like how the slope was softening up. Eventually we found the trail, as we went down, the winds were less, and eventually I could feel my hands well again. From here on out we hiked through the fog to our camp site. At camp we packed up fast, had a snack, and headed on down.

Then we met some guys that were heading up, and I tell them it was snowing. "Have you checked the calendar lately? It's July in case you did not know" they cracked up joking to me. After this there was a steep section which was excellent for glissading down. Must have dropped almost a thousand feet in a minute. From here we ran down the trail, and I just so happened to see Priscilla ( a friend of mine) which was nice to see her again. As we were running down I tripped and fell, I was annoyed because I ripped my climbing pants. The rest of the way down went well and before long arrived at the trailhead. Sadly my camera went missing from this trip, but for the most part I had a great time. Good thing I had another camera on this trip.

Those were some times.

Agreed, can't wait to return to Baker some day.