Even though I have already climbed Mount Baker twice, it is such a lovely mountain that deserves another visit. For the longest time I had been wanting to do a winter ascent of Baker because I know how beautiful the North Cascades are during this time of year. An amazing weather window came about just in time before my buddy Steve arrived in Washington. Gimpilator warned me that the avalanche danger could be high on Baker even with the low avalanche forecast. But our luck was in, the snow was incredibly solid.

I met Steve though SummitPost once again on accident because of a snow cave picture. At first I could not make up my mind of what mountain to climb. Mount Baker? Mount Shuksan? Eldorado again? They all sounded wonderful. I was warned that Shuksan could be dicey at the end due to snow build up with a lot of exposure. Steve came over to my house and picked me up for the trip with a undefined destination. As we are heading North we missed the turn off to Eldorado and decided that Mount Baker would be the one.

We went to the ranger station to ask some questions which we were told that the road was opened either all the way to the trailhead or a few miles maximum. Steve and I were very excited to hear this news, another source we earlier read said 6 miles from the trailhead. As we get closer to the trailhead we see Mount Shuksan glowing brightly looking more beautiful than ever. 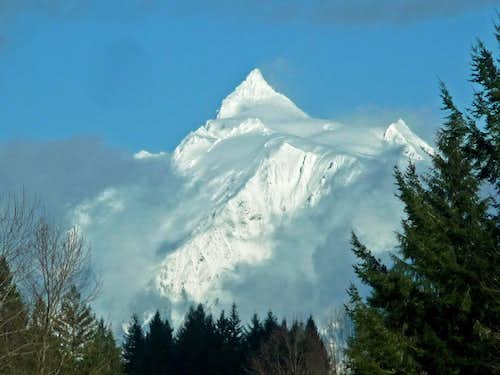 Mount Shuksan Clearing Up
Further up the road we encountered snow, got into a little bit of trouble (I'll spare you the details), and got our packs ready for the Baker ascent. The hike started out as a road walk on packed down snow. Every now and then a snow mobiler would come by disturbing the peace and making us feel teased for how easy it was for them to go up the mountain. "But where would the fun be in that?" I smiled to myself as I look towards the Southern Mountains. It felt good to once again be back in my element and enjoy the cool of the evening. 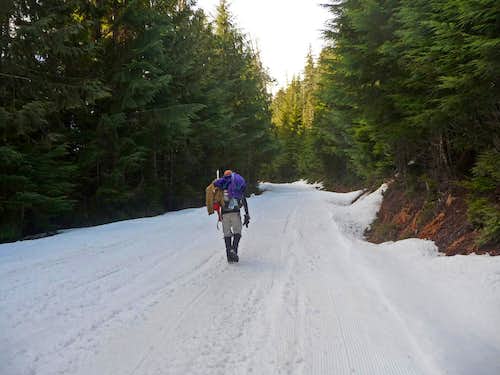 Hiking along the Road
The trailhead was not as long of a hike as I had feared. The hiking trail was covered in several feet of snow making the snow mobile track the best alternative for finding the railroad grade. Looking up at the ridges I had to decided which ridge was the railroad grade, I saw no cliffs which I remembered the railroad grade having. I finally decided it would be best to take a right which went onto Metcalfe Moraine. As we get further up the ridge I realize that this was the wrong side of the valley, but knew that even if we ended up on the Squak Glacier that it would be a good line of ascent. The moon light made the landscape very exciting looking, the Twin Sisters range to the West was brightly glowing as well as the glaciers all around. We found a flat spot around 5,700 feet and pitched the tent there. 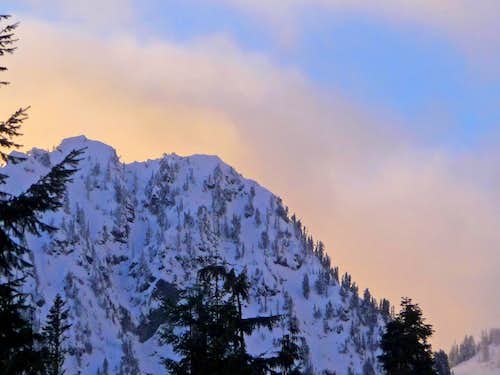 Sunset over Survey Point
Cooking and melting water took a while due to our fuel canisters being cold. I didn't even bother with boiling any water because of how long it was taking. As I was waiting I managed to capture one picture which I would then have to take out the battery and put it inside my puffy until it was warm. I attempted to get many other night photographs, but my camera kept dying on me as it processes the photo. It was becoming too painful on the hands to keep trying. "The things we do for photography" I giggled as I enjoyed some cheesy pasta. Soon it was time for some rest for the next day. 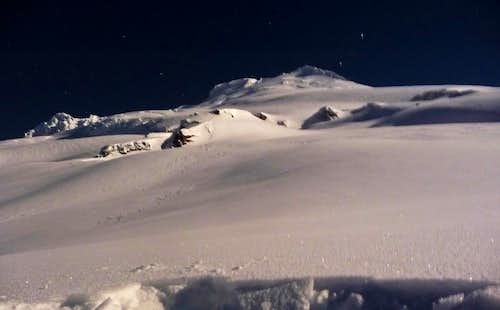 We wake up around 3:15 a.m. in the morning in hopes for an alpine start. Unfortunately the cooking took much longer than we had anticipated. It took 2 hours to cook up 3 liters of water as well as some water for hot chocolate. Thank goodness that I was able to stay warm in my sleeping bag as I had the stove cook on the outside. I should have put my fuel inside my sleeping bag which I plan on doing in the future. Not knowing exactly where the glacier was I decided to have us rope up after getting out of the tent. Finally we were able to get on with the climb.

Even in the dark hours of morning the moon was shining brightly in the sky making the climb all the more exciting. Steve and I took turns breaking trail up the mountain making decent time. The sunrise was worthy of taking a break for, but difficult to photograph due to the cold on the hands and battery. Thank goodness I brought a video camera as well. 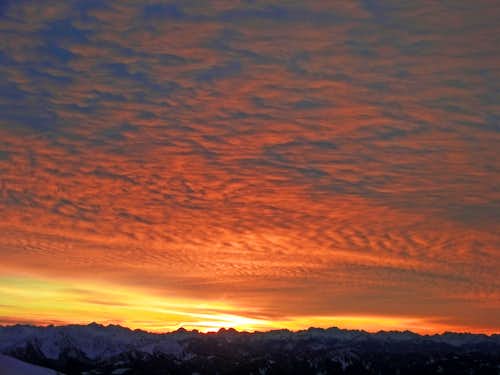 Sunrise in the North Cacades 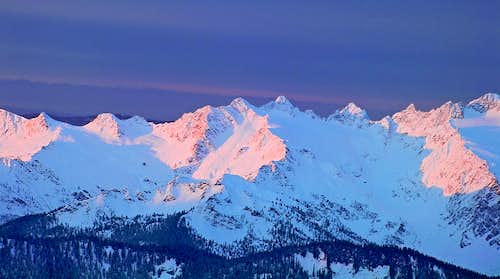 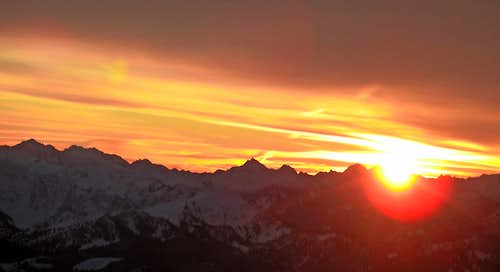 Colfax Peak during Winter
After passing some crevasse fields I start getting dizzy and exhausted. Leg strength I was feeling fine, but my energy was running low due to lack of food. I had under estimated how much to bring because for a while I had been bringing too much on these mountaineering trips. Each step I felt more and more fatigue until Steve could see it in my facial expression. He handed me a few snacks which within a matter of minutes I was feeling like my old self. For the rest of the climb I did not tire out like before and knew that we could at least make Sherman Peak. Steve mentioned a knee problem that he had making it questionable if we would make the summit of Baker. 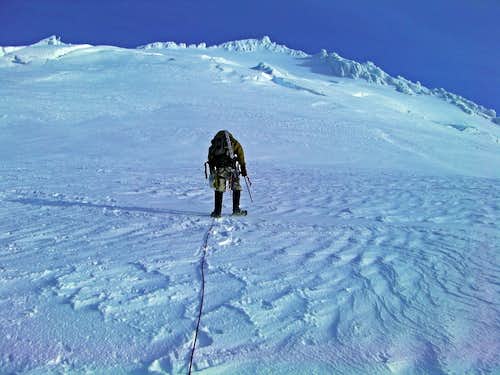 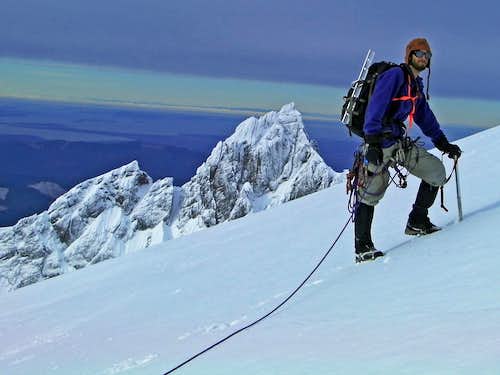 High Up on Mount Baker
At the Crater Rim we set down our packs and pushed on the rest of the way up the ridge to the Summit of Sherman Peak. It had the best views of the Mount Baker crater I've ever seen. Looking below we could see fumerals inside the crater making the place smell like sulfur. After resting a bit we went down the ridge towards Baker. 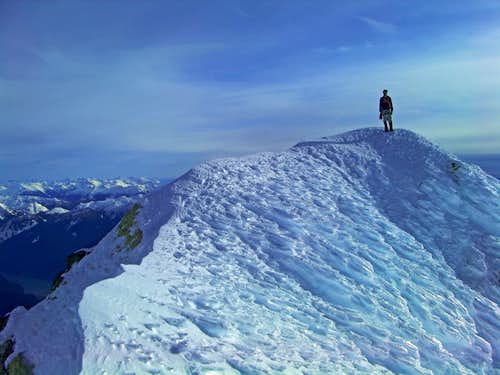 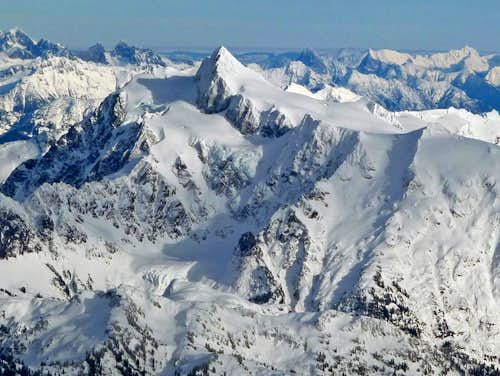 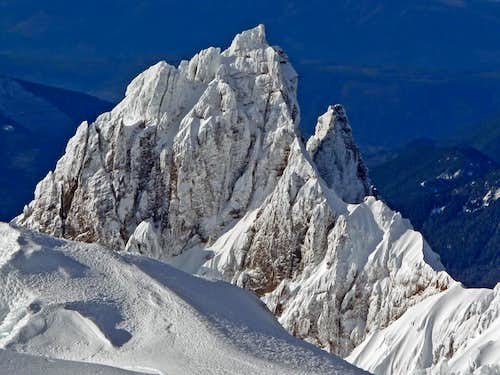 Lincoln Peak during Winter
On the way Steve finally announced "my knee is giving me a lot of troubles, I could make it up Baker but it would be tough". I replied "Steve, I've already summited Baker twice. I don't think it's a good idea for you to continue on with your knee problem". After Steve gave it a moments though he finally agreed and called it a day. I knew both of us could make the summit, but why take such a unnecessary risk? Even if everything goes well, it could further injure it for future climbs if we continued. Plus the gloomy coming over made it even less tempting. I was very happy to be doing the right thing, and besides Sherman Peak was a great peak by itself.

We took a different variation on the way down of the Easton Glacier. Although you could see some off to the side, we never had to navigate around any crevasses. Michael had some medicine that seemed to help the knee pains a little bit.


Back at camp as an energy booster and reward I cooked 6 packets of hot chocolate for Steve and I. It was very nice to enjoy the alpenglow as I sip on warm chocolate. I believe it is moments like these that have us coming back and will always be remembered. A few minutes later I packed up the tent and were ready to go. 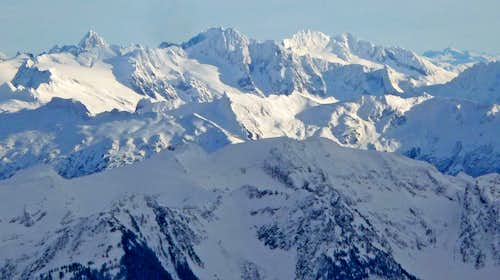 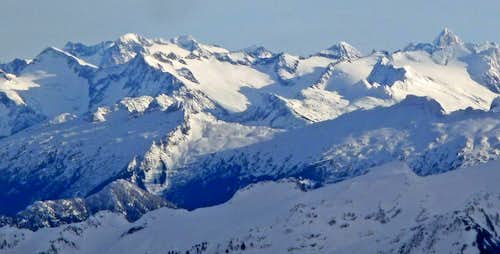 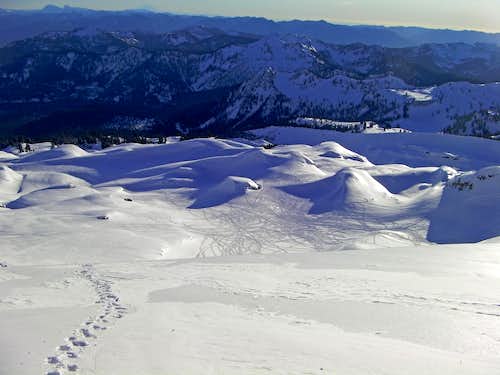 Our Route back Down 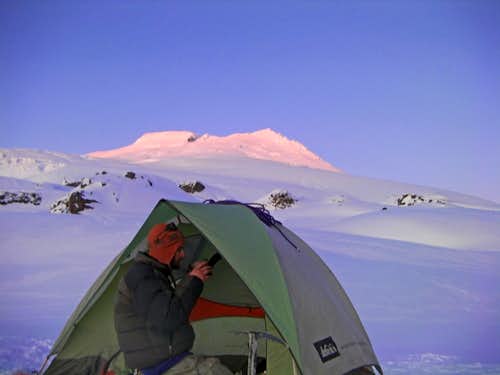 Our Camp on Mount Baker

Sunset on the Twin Sisters 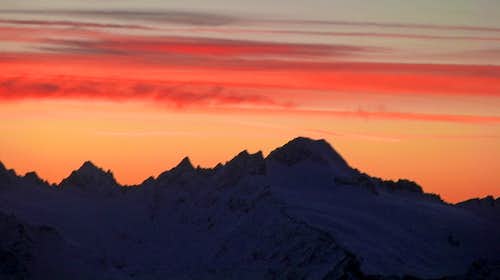 Sunset on South Twin
The Twin Sisters had bright red clouds above it making us both looking back as we went down the moraine ridge. Once we got to a good spot we were able to glissade down into the valley. From here it was miles of walking though snow and road. We had many conversations on the way down that made time seem like it flew by, before long we were back at the truck. This was another great winter outing.

man these pictures bring me back.

Thanks, one of these days we should do another trip together!

It looks like the other peak is just as impressive as the true summit of Mount Baker. I'd like to go back there and get it this year. Your pictures are always impressive!!

Thanks Eastking, you should climb Colfax as well. Even Baker along is worthy of a revisit.

Great photos Josh! Very impressive! I was up on Coleman Glacier this past weekend and I know what you mean by it being COLD! Keep up the good work!
-Pat-

Thanks Pat, the biggest problem is not just being cold myself, but this messes with my photography. Some of my best work escapes me because of this. What I need is a more modern camera that can handle this.