Mount Baldwin rises a few miles south-east of the town of Mammoth Lakes. It is the high point on the ridge that ends in the spectacular north face of Mount Morrison. According to Secor, Baldwin was first climbed in 1928 by, of course, Norman Clyde. 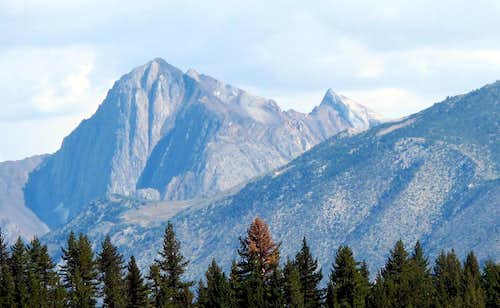 The standard route climbs the steep west face of Baldwin -- the sharp point on the right in the photo above. The trail starts at Convict Lake, goes up Convict Canyon through the Mildred Lake basin, then follows a (mostly) class 2 use trail to the summit -- approximately 15 miles round trip with some 5,000’ of elevation gain. Note there is a stream crossing a few miles up Convict Canyon that can be hazardous during high runoff. Near the summit the trail crosses piles of giant calcite crystals, which under the right conditions can be seen from miles away, glittering like some dragon’s hoard high on the mountain. This route, along with a couple of variations, are described under the route page "Convict Canyon".

Baldwin can also be climbed up the east face, starting from the McGee Creek trailhead. These routes are half the distance of the Convict Canyon trail, but the elevation gain is almost as much and involves a lot of climbing on steep, loose rock. Secor describes two class 4 routes, approaching respectively from the North and the South ridges. 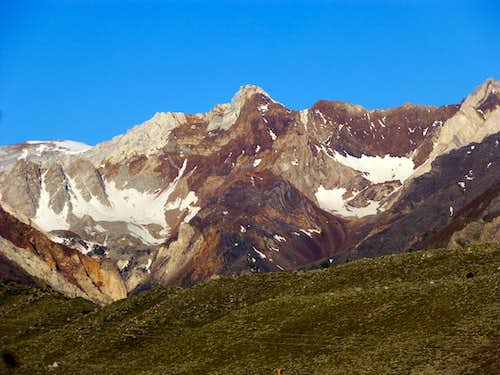 There is a lot for overnight parking shortly before the lake, on the right just before Convict Lake Resort. The far end of the parking lot has a trail that heads south for a half-mile to join the main trail along the north-west side of Convict Lake.

The geology in the Mount Baldwin area is in stark contrast to the usual Sierra granite: limestone, marble, slate, sandstone, and igneous intrusions, all folded together as if by some crazed giant baker, then eroded into bizarre formations. For a good description of the local geology see the page on Laurel Mountain: Laurel Mountain

Baldwin has several outcroppings of calcite crystals, two of which are crossed by the use trail: one on the Mildred side of the saddle to Bright Dot Lake, and better crystals some 700' below the summit. 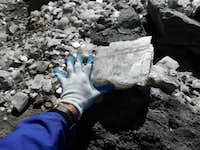 The high outcropping is commonly described as the "Calcite mine" or the "Bausch & Lomb mine", and there have clearly been diggings, however there is no road or other indication of significant mining activity. According to an old geological report, several mining claims were filed for "Iceland Spar": “Numerous deposits of coarsely crystalline, colorless calcite are situated in the crystalline limestone of the upper Convict basin… The bodies of clear calcite are usually lenses, or huge druses, several tens of feet in greatest dimension.

The minerals are calcite, in huge crystals (cleavage pieces, reaching one foot in diameter, have been obtained, and serve to give some idea of the size of the complete crystals), and euhedral quartz… An attempt to determine the quality of the material was made in 1932. Several hundred pounds of the calcite were taken to Pasadena by Robert 0. Boykin, a mining engineer, and from one of the pieces a small prism was cut by John A. Anderson, of the Mt. Wilson Observatory.

When finished, the prism is said to have been of first-class optical quality.” Evans B. Mayo, "Geology and Mineral Deposits of Laurel and Convict Basins, Southwestern Mono County, California," California Division of Mines Report 30, pp. 79-88, 1934. (Thanks to David Lushbaugh of the California Geological Survey for locating this paper).

Iceland Spar, a transparent variety of calcite, has played a central role in optics and instrumentation, starting in 1669 with a description of the double refraction effect that is today a staple of high school physics labs and rock shop curios. Newton, Huygens and Maxwell based their theories of light in part on this birefringence in calcite, and the crystals were used to construct polarizers that were a staple of scientific instrumentation well into the 20th century: Scientific history of Iceland Spar

There has been speculation that Iceland Spar was the “Viking Sunstone” of legend, used by ancient mariners to navigate through overcast seas: Sunstone (medieval)

One notable inhabitant of the area is the Mount Lyell Salamander, an odd creature that has no lungs yet cannot live in water; it "lives at high elevation in rocky areas along streams and at the edges of snowpacks. It uses its webbed feet to climb vertical rock faces, and its long tongue to pick off its insect prey." It also has a neat escape mechanism: "Adults also respond to simulated predator attacks by coiling the body and tail tightly, forming a spherical body that rolls downhill under favorable conditions (García-París and Deban, 1995)." But mainly, this salamander is renowned for having the longest tongue of any amphibian in the world. For a cool video of the salamander in action, see here:
High-Power Ballistic Tongue Projection in Hydromantes

These creatures are protected but not endangered, however they are rarely seen due to their nocturnal habits and natural camouflage; in 30 years of hiking the Sierras I've only seen one -- near Bright Dot lake. If you do see one, it's not a great idea to pick it up: "The skin contains toxins that have been reported to produce temporary (about 30 hr) blinding when introduced accidentally into human eyes (Hansen, 1990)". Also note that "They are protected as a species of Special Concern by the California Department of Fish and Game and may not be taken or possessed at any time."

The source of the name for Mt Baldwin is not listed in Browning or anywhere else I looked. Please send me a note if you have a reference for the origin of the name.

Briefly, permits are required for overnight stays but not day hiking.

Current information on the Eastern Sierra can be found at the following websites:
The Sierra Web
Inyo National Forest