This small summit is often cast into the shadows of the more prominent summits around the Brighton area. It is a portion of the ridge extension leading east from Honeycomb Cliffs, and overlooks Twin Lakes Dam. The entire summit is crowned with Engleman Spruces, hence the name Mt. Evergreen. Most of the geologic composition of Mt. Evergreen is a mixture of Deseret and Gardison limestones, formed during the Mississippian time (360 to 320 million years ago). Interestingly these limestone rocks were formed from rapidly accumulating fragments of shells and skeletons of once living organisms, siltstone and mudstone. The rocks on the ridge and summit of Mt. Evergreen have an interesting sheen when seen in the sunlight. Though not as challenging as some of it's larger neighbors, the ridge and summit area offer great views into the Wolverine Cirque to the south, the east face of the Honeycomb Cliffs, and a grand view of the Twin Lakes Dam area. The summit has two routes you can choose, one leading from the service road leading to Twin Lakes, and another from Silver Lake via Mill F Fork. Both routes lead to a saddle on the east side of Mt. Evergreen, where the trail is evident near a ski sign leading steeply up the first 50 feet to the ridge above. 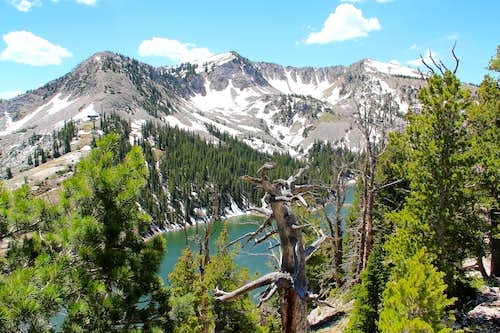 The peak offers some great views above Twin Lakes. South at the Wolverine Cirque area. 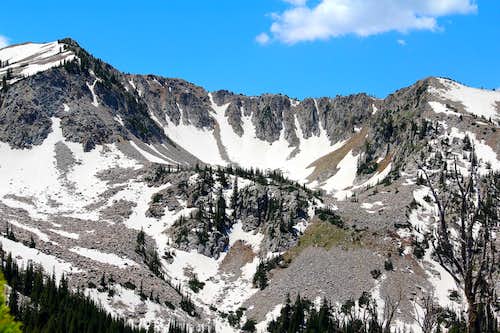 Telephoto shot of the upper Wolverine Cirque from Evergreen. 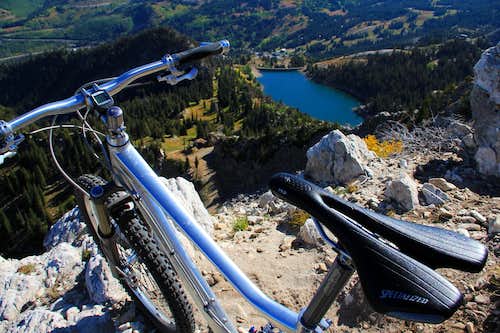 Looking down at Evergreen from the summit of Honeycomb Cliffs.

Drive 14.7 miles up Big Cottonwood Canyon to the Brighton Ski Resort area, and the road begins a one way loop turning southwest. 100 yards from the beginning of the loop, a parking area (Solitude Nordic Center) opens up on the right leading to Silver Lake. Park here or 1000 feet further up the road on the west side. Just south of this parking area will be the first visible ski lift in the Brighton area, leading very near the summit of Mt. Millicent. You can choose where to park depending on which route you want to take. 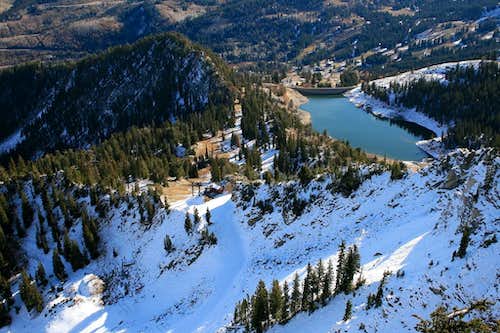 Mt. Evergreen is the forested summit to the left of Twin Lakes, as seen from the Honeycomb Cliffs. 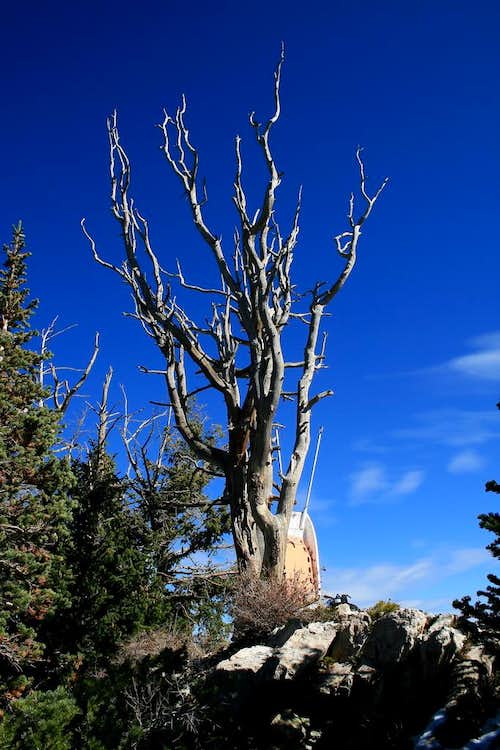 The dead tree marks the summit. 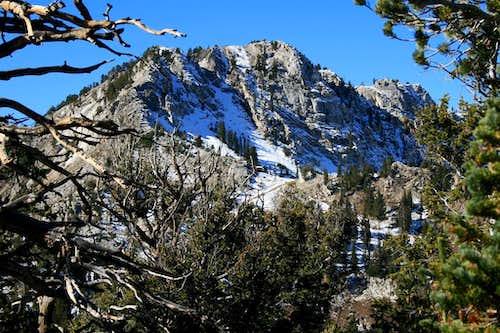 This is a view from the tree clad summit looking west at the Honeycomb Cliffs. 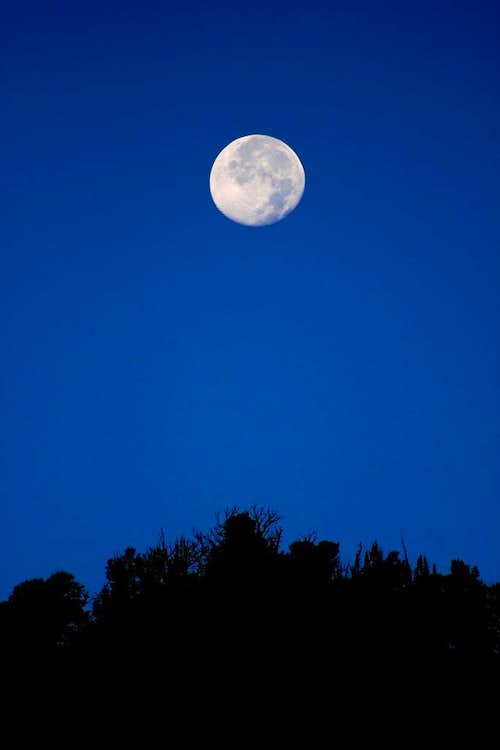 Early morning view of the moon and the tree capped Mt. Evergreen.

There are no fees required to access Big Cottonwood Canyon, and the main canyon road is open year round with the exception of closure due to large snow storms, or construction, which generally occurs during summer months. If you are trying a winter attempt plan on having difficulty finding parking due to the crowded resort during the snow season. Attention should be paid to current avalance conditions during the winter season, please check out the Utah Avalanche Center link here for the most current updated information.

One thing about Mt. Evergreen is it's ease of access. From the Brighton Parking lot it is roughly 1,000 vertical feet to the summit area, just under 4 miles round trip. During the summer and fall season the peak makes a great hike for those of us wanting to cool off from the stifling heat of the valley. Also the peak's terrain is great for kids who are wanting to get started hiking. The west ridge approach of the peak is steep class II terrain with some loose rock debris, though the exposure is minimal. This section alone is a good area for kids to begin to really learn and prepare for more difficult terrain on a larger scale. The upper ridge area is narrow in some sections though under a watchful eye kids should be fine.

There are several back country campsites located on the south west side of Twin Lakes. Redman and Spruces Campgrounds further down the canyon offer water and latrines, they do require a fee, and are generally booked up with reservations through out the summer season. Developed Camping: Spruces Campground information: Elevation 7500 feet. 101 developed campsites includes 9 doubles, 2 triples, and 3 group campsites which hold up to 50 people each. There are also 5 day use group sites for picnickers which hold up to 50, 100 & 150 people, respectively. All group areas are accessible for those with disabilities. Other facilities include a baseball field and volleyball court. Location: 9.7 miles up Big Cottonwood Canyon, on UT 190. Address: Salt Lake Ranger District Wasatch Cache National Forest 6944 South 3000 East Salt Lake City, UT 84121 Phone: 801-733-2660 Season: late May/ June - mid-October Fee: $16/single; $32/ double; $48/ triple Reservations: tel: 1-877-444-6777 Public Lands link here.

History and naming of Mt. Evergreen.

Mt. Evergreen has stood over many of the earliest social affairs from the early Mormon Pioneer days when settlers made the Salt Lake Valley their home in the mid 1800's. It draws its name from the June 1870 Evergreen mining claim, located on the flanks of the peak. The mine was worked with a vengeance, being supplemented by extension claims in all directions, taking it to the other side of the peak into Mill F South Fork. In 1874 the Evergreen Consolidated Mining and Tunnel Company was incorporated to work the mine and several surrounding claims. One of the incorporators and the principal stockholder was Green Flake, one of two black slaves in the original party of pioneers who arrived in the Salt Lake Valley in July 1847. The company worked the mine until 1880, when it was reorganized as the Old Evergreen Mining and Tunnel Company, which continued to work the property well into the twentieth century. With the early presence and importance of this mine, it was perhaps inevitable that the mountain in which it was worked would be named after it. Indeed, as early as May 1871 it was called Evergreen Mountain, and later that year Evergreen Hill. And it has been known by the name Evergreen ever since.