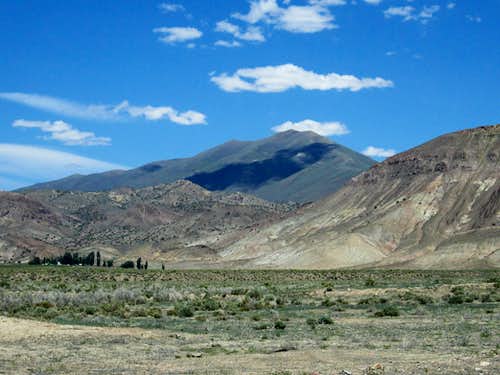 Mount Tobin is the 62nd most prominent peak in the lower 48. It has over 4800 feet of prominence and is located just a hop skip and a jump off of a busy interstate. OK, maybe its more than a hop skip and a jump but hey, it is a heck of a mountain and well worth a visit by any prominence peakbagger that is willing to make the effort to go after it.


Mount Tobin is located south of Winnemucca and is another of those rarely visited mountains so prevalent in the backcountry of Nevada. It is a large mountain that can be seen for miles away and fortunately has at the present moment, good access through some of the private property that surrounds the mountain on its south side.

The mountain was supposedly named in honor of Clement L. Tobin of Winnemucca. While cattle ranching is the present use of the area, an active mine was present on its flanks up through 1907.  If you look closely at the picture to the left (increase its size by clicking on the picture), you will see a ranch house nestled among the trees on the left side.

As I mentioned in the opening sentence, it is one of those Nevada mountains that have more than 4000 feet of prominence (there are 24 in the state) and for me that was what really caught my attention and attracted me to it. With over 4800 feet of prominence, it is the 62nd most prominent peak in the lower 48 and is the 12th most prominent peak in the state of Nevada.

It is not a difficult peak to climb as nothing is technical on this mountain but as is often the case in Nevada, the crux is the getting to it.

From Winnemucca Blvd. in downtown Winnemucca, find Hansen Road and take it south, over a bridge, to the first traffic light and thus Grass Valley Road. From this intersection it is almost 46-47 miles south, on Grass Valley Road, to the junction with Golconda Canyon Road at (40.3264 117.6361). GPS waypoints are in nad 87 datum. You have pavement for the first 15 miles or so and then the remainder is on decent graded gravel road. Along the way, you pass Leach hot springs which seemed to be fairly popular with the locals.  We used it for a camping area later in the day and that turned out to be a mistake later that night when a noisy group came in about 1 a.m. and partied till dawn.

As mentioned above, after 46 to 47 miles, watch for an unsigned road the goes to the east.   This is the road you are looking for.  When you turn left at Golcanda canyon road, take a moment and zero the odometer and drive east about 4.5 miles to a second junction at (40.3098 117.5609 ). Along the way, you should have passed through at least two closed gates, fairly close together, at roughly the 4 mile mark, one on each side of the seemingly abandoned buildings of the ranch. Be sure to close any gates you pass through if they are closed.

Drive an additional 1.6 miles (6.8 miles total) to this fourth junction at (40.3182  117.5238 ), elevation 6,345 feet. To your left is a very steep track that you must take. Underpowered vehicles might be stopped here, which is a shame since there is a lot of reasonably level, decent road ahead. 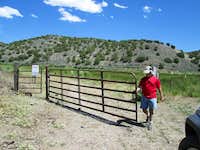 Drive the ridgeline as far north as desired. A couple of "hood and sky" spots required stopping and getting out to spot the road and some drivers might want to park at the base of a very steep hill at an elevation 7,980 feet. My Tacoma made it up this hill in Lo/Lo 4WD but it might not be worth the savings on elevation gain to most drivers. At the top of this hill I turned right and then stopped near the top of point 8682 on the topo. Total distance from the turn onto Golconda Canyon road to where I parked was about ten miles.

Dennis Poulin has provided an excellent trip report on peakbagger.com and I used a lot of his information in finding my way to where I was able to drive to. Where he mentioned passing through a couple open gates on the private property, we found those gates were closed when we were there so be sure to open and close and gates that aren't open when you visit.

There may be other ways to access this mountain but I am only familiar with what worked for me so should you have information on a different way to deal with this mountain, please add it to the proper section. 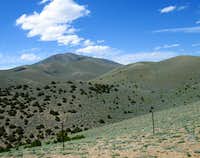 Walk the ATV track as it ascends point 8682 and there is some 150 feet of elevation lost as the track drops to a saddle. The road continues slightly farther around Tobin's eastern flank, eventually reaching an estimated 9,000 feet. You can start up from any point along this track but we elected to go almost to the 9000 foot mark before we started up toward the summi

From the 9000 foot mark, ascend brushy slopes steeply to the summit. We dodged a couple small snowfields and found our way to the summit where great views awaited our visit. We found a register on top but no benchmark.

Our elevation gain from where we parked near point 8682 was about 1450 feet. The distance was short, about 3 miles round trip but if your vehicle can't make it up some of the steeper spots, or the raod is muddy, your elevation gain and miles traveled will increase accordingly.

A very well detailed trip report on a hike up from the mouth of Golconda Canyon, a distance of about 19 miles roundtrip and 5100+ feet of elevation gain is available on peakbagger by Brad Boester. I recommend reading this TR for those who may not have a high clearance 4WD vehicle, it shows how he did get to the summit although it was a long long hike.

Edward Earl indicates that he hiked 14 miles and over 4500 feet of elevation gain on his visit and yet another visitor hiked it from the 5200 foot level. He also hiked it from Golconda Canyon on the south side.

A listing of many of those who have found their way to the summit can be found at peakbagger. Click HERE for the link.

Opening and closing the gates was the main "red tape" we encountered. On one of the gates, we were informed that our passage through private property was a courtesy that could be revoked at any time so I feel it is important for future visitors to adhere to the request of the private property owners and make certain that gates are opened and closed. In retrospect, I believe we had 4 gates to open and close along the way.

For more information about the area:


When to Climb and Summit visitors

I feel you could probably climb this mountain any time of the year but if you use the roads on the south side, it'd be best to wait until the snow is gone.

Thanks to the prominence of this mountain, it attracts quite a few visitors despite its isolation. Peakbagger's list now shows 24 visitors through 2015 and Lists of John shows some names that aren't on the peakbagger.com list. I don't link to Lists of John as you can't see those names if you are not making a 20 dollar per year donation. It is a fair cost thanks to the amazing amount of work that goes into creating and maintaining such a website and peakbagger.com also is deserving of that type of donation. Please consider it. 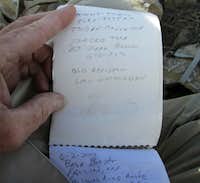 There are no campgrounds in the area but since some of the land is BLM land, you could find places to car camp if you use the "leave no trace" ethics.
Byild no fire rings and pack out all of your trash. Winnemucca has many fine motels to choose from. It is wise to fill up on gas before leaving town as it is almost 120 miles round trip from Winnemucca to Mount Tobin.

As mentioned above, this is quite a ways from Winnemucca. Be sure to have a vehicle in good shape, spare tires and plenty of gas. Your cell coverage is probably non existant and it would be wise to let others know where you have gone and when to expect you back. None of the information provided above will always be current and it would be best to check with the BLM about road conditions and to be self sustained in the event of a breakdown or emergency.
If you can travel with another vehicle, that would be the way to go as getting help would be very iffy in this part of Nevada. If anything has changed and needs to be updated, please add your comments to this page.