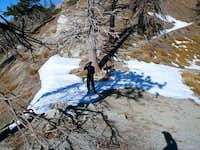 At Windy Gap; the Mt Islip trail is immediately behind Travis climbing right.

Mt Islip, one of the more popular peaks in the northeast San Gabriels, stands along with its sister peak, Mt Wiliamson astride Islip Saddle. Named after George Islip, the peak is relatively separated from its neighboring peaks providing stunning views on clear days in all directions. A cabin in ruin just off the summit attests to its importance in bygone years as a fire lookout.

According to the Angeles National Forest website, “One of the earliest two-way radios used by the Forest Service was located at this lookout for fire reporting during the 1930's. Forty years ago, there were many more lookouts on various peaks of the Angeles National Forest, but the increase in smog decreased visibility so much that their effectiveness was greatly reduced, and they were closed.” More history on Islip is available in John W. Robinson’s excellent book Trails of the Angeles.

There are several trails and routes that can be used to approach or hike Mt Islip. For specific details, see the route pages attached to this mountain page.

Windy Gap: The Mt Islip trail, maintained, leaves Windy Gap and climbs to the top of the peak in a little less than a mile. An alternative from Windy Gap is to climb the east ridge (steep use trail) up to the summit or to where the Mt Islip trail crosses the ridge north to south. A side trail can also be used to reach the Mt Islip trail from Little Jimmy Campground. There are multiple ways to reach Windy Gap.

Northwest Ridge: The ridge branches near the bottom and either branch can be climbed. The NW branch begins shortly into the hike on the PCT from Islip Saddle while the N branch is about 8/10 of a mile into the hike. Follow the ridge (~1.25 miles). 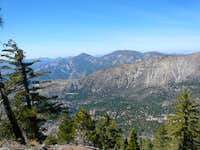 Southwest Ridge: Two possible routes from the Crystal Lake area gain entry onto the southwest ridge of Islip. Once on the ridge, the unmaintained trail meets the Mt Islip trail just before the final switchback up the summit. Expect numerous fallen trees to be blocking the trail. 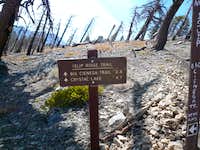 Little Jimmy Campground is the closest campground to Mt Islip but there are many in the San Gabriel Mountains. The mountain can be hiked in almost any season but May through October are the most popular times. In heavy snow years, the PCT trail (on the north facing slope) can be covered in snow and additional cold weather gear (snowshoes, crampons, ice ax) may be required. Check for current weather.

Be warned - there's been a rash of car break-ins at the Islip Saddle parking lot. Leave your doors unlocked - even items of no value are being stolen.