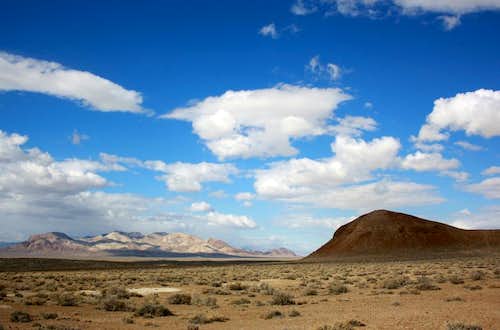 Calico Mountains
Donnelly Peak is the highest peak in the Calico mountains of northwest Nevada on the fringes of the Black Rock Desert. This range highpoint appears at number 79 on the lengthy Nevada 2000 feet of prominence page and is one of many 8000 foot sentinels ringing this remote desert basin. Make no mistake, there is very little to redeem this mountain from a scenic standpoint, its barren, wind blighted slopes offer no forest cover of any kind and no persistent streams flow from its flanks. Wildlife is scant here other than herds of wild horses that storm across Donnelly Flat in the spring. This is a mountain for the heartiest of Nevada peakbaggers, offering little hiking experience or scenic enjoyment.

With that said, Donnelly does offer decent views of forested Granite Peak to the southwest, and the Black Rock is framed nicely by the Jackson Range and Pahute Peak to the east and northeast. Views of the lower southern Calico Mountains are nice, while nearby South Donnelly Peak and Division Peaks appear to be more worthwhile hiking goals than Donnelly Peak itself. If you are here to check this off the Nevada P2K list, it is highly recommended to combine this mountain with one of the other nearby peaks as Donnelly takes roughly half a day to complete and be back to Gerlach provided an early start. Expect about 50 miles drive in from Gerlach, and a 1.5 mile hike with 1500+ feet of elevation gain based on where you start walking. The hiking route would be up the southwest slopes from the end of the road. 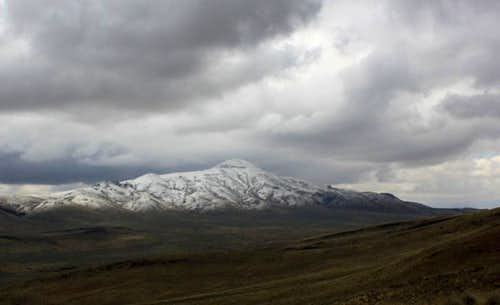 Donnelly Peak
This mountain could really be approached from any direction given a willingness to traverse unfathomable distances of sagebrush. The Nevada Benchmark Atlas shows a loop road that curves around the west slopes of Donnelly Peak referred to as Barley Road. The southern half of this road is narrow, rocky, and almost completely overgrown in places. I attempted about 3 miles of this road before turning back and trying a northern approach. The norhtern half while being a 4x4 road is much better and actually leads to diggings on the 7000 foot level of the mountain.

From Gerlach Nevada follow Highway 34 north out of town and past the Hualapai Flats to where the pavement ends in a little over 20 miles. This road leads into Leadville Canyon, where Highway 34 is a nice 2 lane gravel road up a windy canyon. Around the 40 mile mark you will top out where the Swingle Ranch is marked on USGS topos and in the Benchmark Atlas. Here you want to watch for a right turn and a large sign warning about travel into the back country. Turn right here onto a dirt 4x4 road that drops down into Willow Creek Canyon. Within a quarter mile of turning off you will take a right turn. This is Barley Road, and following it will lead you all the way to the western midslopes of Donnelly Peak. At 3 miles up Barley Road you will reach a pass over the Sheep Peaks where you will get a good view of Donnelly Flats and Peak. Here you can see much of the remaining road and its worst sections which are the descent from the Sheep Peak Pass down into Donnelly Flats. At 8.5 miles you will reach the turnoff into the canyon leading up to the jumping off point. Drive as far up the canyon as you are comfortable with, which can be almost another 2 miles to the 7000 foot level of Donnelly Peak. 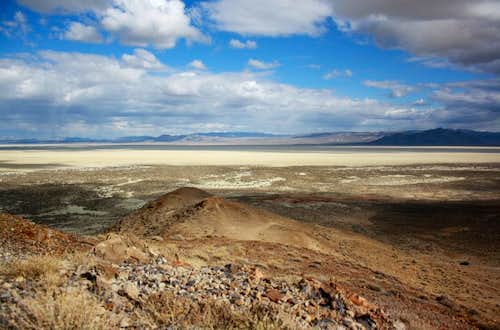 Black Rock Desert
Lots of open range out here, be sure to leave gates in the same state you find them and don't harass the cattle. Roads out here are rough, and the nearest thing to "civilization" would be gravel road 34 which connects Gerlach to Cedarville; hardly the metropolises of Nevada and California. Preparation for flat tires and car trouble is recommended. Water is scarce, but not impossible to find. Water troughs for livestock can be found at several locations around the western flanks of Donnelly Peak, overflowing in April, it is unknown how much water would be present in the height of summer through the beginning of winter.

You could camp anywhere out here, I chose the serenity of the Black Rock Desert just north of SteamboatBM, but if you don't mind horses the Donnelly Flat would work just as well.

Mormon Dan a low peak along the east side of the Calico Mountains, it is the low hill at right.