The Garfield Hills range is found in western Nevada about 65 miles north of Tonopah. This range consist of relatively gentle hills and mountains that offer no technical difficulties and the access is also not difficult compared to many of the other Nevada prominence peaks. The interest in this mountain range's highest point is due to the fact that it has over 2100' feet of prominence and ranks #146 on the Nevada state prominence list. Those who seek out the summit are those who are after Nevada's prominence peaks and one thing about prominence peaks, they generally have outstanding views and this one is no exception.

The range was named in honor of President Garfield, not long after his assassination (1881) occurred at the time when a mining district was being formed in this area of Nevada. No, Garfield the cat was not around at the time as this famous cartoon figure didn't appear until 1978, almost a hundred years later. 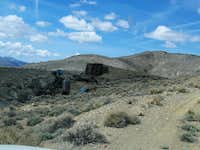 From Tonopah or Hawthorne, travel on highway 95 to the small town of Mina. In Mina, locate 12th St and zero your odometer. As you leave town the road turns to gravel but it is wide and smooth. At .9 take the right for, at 7.1 turn right, at 9.5 turn off the good road onto a much lesser road to the right and then at 9.7 take the left fork. At 12.2 pass a solar panel on the right, at 13.3 reach the upper end of the Bataan Mine that has some fallen down buildings and equipment, and at 15.1 reach a saddle at about 7660 ft and park. This is your trailhead.

If your vehicle doesn't have high clearance, you will need to park back down the road at the 9.5 miles mark noted just above.

From the saddle area, it is less than 2 miles to the summit area and this entails about a thousand feet of elevation gain. It is a easy hike over three hills to get to the highest area and Ken Jones has placed our GPS track at peakbagger.com


When to Climb and summit register 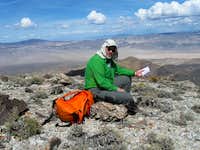 This mountain could most likely be climbed at just about any season of the year. Winter poses the possibility of snow and if there is a lot of snow, then wait until it diminishes. Travel during wet weather on the lesser type roads or jeep tracks is not recommended due to the possibility of mud. Watch the weather report but this mountain may very well be possible in November, December or even January.

The summit register had many names that I knew but a nice listing can be found at peakbagger.com and at Lists of John (not everyone signs both of these websites registers)
Note that the register was placed by Tom Roundtree and there are several other noteworthy Nevada prominence peakbaggers signed in who are not members of peakbagger.com so it appears that this mountain has about two visitations a year on average. 2013 was a banner year with six  reaching the summit. 2014 had just one visitor and so far, 2015 has been busy with four already signed in at mid year.

As far as Red Tape is concerned, I know of no reason you can't legally visit this mountain/area. It is located on BLM land.

No organized campgrounds in the area although since this mountain is located on BLM land, you could car camp in the area. Motels available in Tonopah and Hawthorne. For more information, you can contact the BLM office in Tonopah:

Desert Lobster - Where to eat in Mina.

Mina - A ghost town (still has over 100 residents)