Saddle Benchmark Peak is one of those mountains in Nevada that sees few visitors and only recently has it attracted any attention thanks to the new field of prominence peakbagging. It is surprisingly close to the highway that runs between Battle Mountain and Austin and one individual has actually hiked it from near the rest area that is located on highway 305.

With just over 2000 feet of prominence, it comes in as the 160th most prominent peak in Nevada on the Nevada prominence list (Link). It is not a peak that is overly striking or special but it is as I mentioned, relatively close to a paved highway which is always a nice development since so many of Nevada's peaks are only accessible by long drives on dirt roads.

From I-80, turn south on highway 305 and head for the rest area located about 39 miles south from the interstate. From US 50, head north on 305 and head for the same rest area, about 50+ miles north of Austin. Using the rest area as a central landmark, go another mile and a half north and look for a dirt road on the right side of the highway and take it as it goes east toward the mountains. Follow it into the canyon.

I will share Dennis Poulin's comments about the directions here: "I approached Saddle BM from the west on Hwy 305. About 1.5 miles north of the rest area, I turned east on a dirt road that took me to the west side canyon of Saddle BM. The road going into the canyon didn't look any worse than the road I came up so I continued into the canyon. At a fork in the road I took the less travelled road up to the left." The road he refers to is much rougher and you'll need high clearance and 4WD as it heads steeply uphill from the road you'll travel to this point in the canyon. You'll know if you are on the right road or not if you pass an abandoned caterpiller road machine about 1/2 mile up this road.

You could park just off the road here and start walking as the road that continues gets rougher and and has some spots that will make you and your vehicle nervous. A large truck like a Tundra will not negotiate past a boulder that has fallen onto the road and will make drivers of smaller width trucks concerned (it sure did me) as you will have to edge out toward a drop off in order to get past the boulder. If I had it to do over again, I would walk it as Dennis did originally. An ATV would fare well however although walking the road is a good choice for most. Proceed in a vehicle with caution and at your own risk. My 2005 Tacoma just barely made it around the boulder. Once you make it to the saddle at the 7100' mark, park and walk from there.

Pics of the road are not included as I was too busy driving to take the time to take a picture or two. Of course, in retrospect I wish I had something to share. From the highway, Brad Boester walked a bit over 7 miles and gained over 3500 feet. From where Dennis parked, he walked over two miles and gained over 2300 and from the saddle where both Ken Jones, Mark Nichols and I parked, it was less than a mile with a bit over 1300' of elevation gain. Those are the choices but I think Dennis may have had the best idea when he walked it from the cat.

Dennis: "I car camped at the CAT and in the morning I hiked up the road. A full size truck may not be able to get safely around a boulder between the switchbacks. I followed the road up to a saddle at about 7,100 ft. At the saddle I left the road and hiked directly up the steep west slope of Saddle BM. This is a sage brush covered slope with streaks of talus. I found the talus was fairly stable and was easier climbing than weaving through the sage brush. When I climbed high enough that I could see the summit, I started travering to the right towards the summit. Great views from this seldom climbed summit." 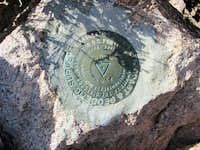 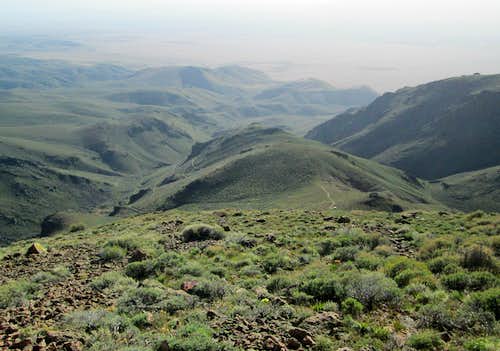 The Trailhead at the 7100' saddle - westerly


No red tape as far as I could tell since the area seems to be on BLM land. No negative postings or gates that needed to be opened and closed.

This mountain could probably be climbed in any season and in low snow years, probably just about any month of the year.

Several spots in the canyon where you can car camp and it would even be feasible to car camp at the saddle at 7100'. We car camped at the rest area which turned out to work out well for us since there were picnic tables, garbage containers and bathrooms. Motels are available in Battle Mountain and Austin.

Mill Creek campground: A free campground can be found at the Mill Creek Recreation Area. The turnoffto the campground is located 20 miles south of Battle Mountain, Nevada on State Route (SR) 305 and is signed. From the turn-off you will travel four miles on a maintained gravel road to the recreation site entrance.

At an elevation of 5,200 feet, the Mill Creek campground is shaded by tall cottonwood trees and offers 11 designated tent sites, fire rings, picnic tables and nearby restrooms. It is recommended that campers bring their own firewood. There are also three recreational vehicle sites available at Mill Creek Recreation Area, but the campground does not offer electric hook-ups, potable water or dump stations. The canyon setting of Mill Creek makes it a favorite spot of many for a variety of relaxed outdoor pursuits. In addition to camping, visitors to the recreation area can picnic, hike, watch for wildlife and fish for both brook and rainbow trout. Birdwatching in particular is a favored pastime at Mill Creek Recreation Area, as the region is home to a range of birds that include great horned owls, various hawk species, belted kingfishers, woodpeckers, wrens, swallows, sparrows, hummingbirds and more. 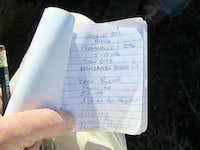 
As mentioned in the overview, there are very few visitors to this mountain and most of the ones shown in the register have signed in recently.