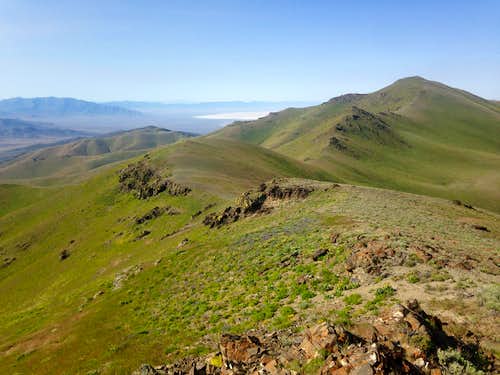 Tholen as seen from the top of Peak 7991


Tholen Benchmark Peak is located southwest of Winnemucca Nevada and is another of those very lonely prominence peaks that had seen only just a few visitors before our visit. According to the register atop the peak, only a few had visited it in the previous ten years. (See summit stuff section below).  While not an extremely high peak with 8276 of elevation, it was on our radar thanks to the fact that it was one of Nevada's peaks that had over 2000' of prominence. With almost 2200 feet of prominence, it was the 135th most prominent peak in the state. Probably the crux of this peak was getting to it which is often the case in the state of Nevada.

The area was a beautiful green when we visited in June of 2014 and was being enjoyed by a herd of cattle who were busy enjoying the tasty grasses they were finding. A bunch of antelope were also present and probably providing a bit of competition to the bovine population of the area. We passed some old mines on the way in and can probably thank the miners for much of the road network that helped us get close to the mountain.

Where the name Tholen originated from is not evident on the information I've researched. Perhaps it is named after an early miner or rancher of the area but it is better than being another Baldy or Green mountain that so many other peaks/mountains are named. Often I can find the origin of names in the good reference book "Nevada Place Names" by Helen Carlson but this time I came up with nothing.

Tholen Benchmark actually has two benchmarks atop the summit, one called Tholen and the other called "Inskip".

There are a couple ways to get to a trailhead for this mountain and I'll present the one provided by trip reports on peakbagger.com first. Thanks to Dennis Poulin, this is the way from the interstate:
" I approached Tholem BM from I-80, exit 149, zero odometer and then headed south on NV 400. At 2.8 miles turn left on Willow Creek Road that is anunsigned gravel road that going straight towards the East Range and Willow Creek Canyon. At 14.6 take the left fork which is a lesser road, at 14.9 take the right fork onto a still lesser road, at 15.8 I parked at about 6,800 ft elevation just before a sharp switchback that goes up to a saddle at about 7,040 ft where the road ends."

Ken Jones also went this way and his information includes a couple more tidbits worth checking out but Brad Boester didn't have the 4WD high clearence needed and he went cross country to the summit. See his report HERE.

Eric and I came in from the east and then from the south since we had done Mount Tobin the day before. We left the road (40.6269 117.6591) that heads to Winnemucca not quite 2 miles north of Leach Hot Springs and went west on a decent county road that headed for Spaulding canyon. After almost 11.5 miles, we reached a fork at coordinates 40.5315 117.8270 and went right. The road goes past a ranch on the left and then gains elevation on a road that deteriorates a bit as it heads up to a saddle on the east side of point 7388. We parked at this saddle, elevation 7050 and coordinates 40.5579 117.8777, 3.3 miles away from the fork where we turned right.

Whether you park at where Dennis did or where we did, aim for Peak 7991 and go over it. A sign atop this peak calls it Gem Peak. One consolation from going over Gem Peak is that it has enough prominence to count as a bonus peak. From the top of Gem Peak, drop down and head for Tholen Benchmark's summit, 1.5 miles away. We found it easiest to try and stay high on the way over and try and avoid a lot of the side hilling where possible.

Dennis's route was about a mile shorter overall than our route but the elevation gain was about the same. Study both GPS tracks provided by Dennis and Eric on peakbagger and choose accordingly.   To see our route from where we parked at the saddle on the east side of point 7388, please check out the GPS track kindly posted by Eric on peakbagger.com HERE.

We saw no signs indicating private property or that we were trespassing. I believe this land is all BLM land and so more information might be obtained by contacting the BLM office in Winnemucca.

Avoid the area when rain or snow is present. The roads would become impassable and it would be best to wait until the roads are dry and all snow has cleared off. Late Spring to late fall would probably be the most likely time to approach this mountain area but it is possible that in drought years, the mountain might be available all year.

You could car camp at the pass where we parked but on BLM land you can camp just about anywhere as long as you follow the "leave no trace" ethics and also be sure to pack out all of your garbage.

The register we found on the summit held just a few names.

Peakbagger also lists Gordon MacLeod on July 11th 2004 but the usual register with his and Barbara Lilley wasn't the one we saw. So, from 2004 to 2014, only 11 of us had visited the top of this seldom visited summit and 4 of us were within two weeks of each other in 2014. 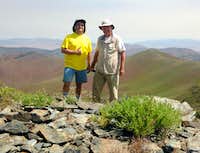 
As mentioned above, the route takes you right over the top of a Peak 7991 (aka Gem Peak) which has a prominence of over 400 feet. Peakbagger.com has a page for it HERE
A small metal sign placed near the summit proclaims it to be "Gem" Peak but who placed the sign is unknown at this time by this author. From the top of this "bonus" peak, it is another 1.5 miles to the summit of Tholen Benchmark and with a loss of well over 400 feet before you actually start up the flanks of Tholen which you have to regain on the way back. You can side hill around 7991 but it is actually easiest in my opinion to just go over the top both ways. I did sidehill it one the ascent and it was hard work.

The roads you will travel on will be dirt once you leave pavement and in poor weather or just after it has rained, avoid the roads if at all possible. Roads in Nevada can become impassable if wet. High clearance and 4WD is recommended and making certain you have plenty of gas, water and supplies along with a good spare tire is very important. Let others know if you are going to head out to this area and when to expect you back. Cell service can be non existant or spotty so don't depend on having communication capability. Have adequate maps and waypoints are good to help you with the roads so do your homework before venturing out into this area. Conditions can change and I cannot be held accountable for changes that might have occurred since I have written this information. You use it at your own risk. Please let me know if you find changes that should be shared with others.
Thank you.