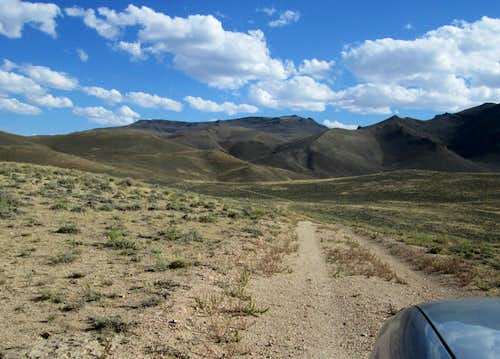 Trinity Peak as seen from near highway 399 to the north


Located north of Lovelock Nevada, this peak is relatively easy to get to and is a non technical desert peak. With over 2400' feet of prominence, it is
of interest to those who are interested in prominence peaks and since it comes in at #112 on the Nevada list, it is still rarely sees visitors which is a bit surprising considering its proximity to Lovelock and I-80.

The mountain is named after the Trinity Mining district and a key player in the development of the mining district was George Lovelock, after whom the town of Lovelock is named for. The mountain is very desert like and no trees or even large bushes are to be found on it. Arid and inhospitable, it lacks
the attraction that would "lure" hikers or climbers to it. Due to its fairly low elevation of 7337', it can generally be climbed in almost any month of the year. A good paved road runs north from the town of Lovelock and you can avoid the necessity of a high clearance vehicle and hike from the pavement if
desired.

From I-80, exit 106 in Lovelock. Take Main St west about .5 mile to N. Meridian and turn right. Go north on N. Meridian about 1.5 miles to Pitt Rd (NV 399). This is a good paved road heading west. At about 11.7 miles pass Seven Troughs/Sulfur road on the right and continue to the sign that indicates "End of NV 399" at about 17.5 miles from N. Meridian. Just past the sign turn left on an old road track going south towards Trinity. If you don't have high clearance, you might want to park just off the pavement and head for the mountain from this point. Follow this dirt road about 0.7 mile and watch for a road that angles to the right and then goes around the backside of the small hill.


It is deeply cut into the hill and leads to a small mining operation on its south side. Just as the road starts uphill toward the mining operation, you will see an old jeep track road that heads toward Trinity Peak. Follow this road as far as you can but there is one spot where the road drops steeply into a draw and would be a place where you might want to park and walk from prior to dropping into it. Continue on the road till you reach the slopes that will lead to the summit.

We headed directly south toward the peak as we could generally see it from various locations along the way. A GPS waypoint for the summit is helpful but not necessary. Most of the hiking is class one with one area of class 2. The terrain is steeper than it appears but from where we parked our vehicles, it was 1700' feet of elevation gain in roughly two miles. 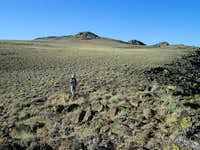 On the route up


You can approach this peak from the south or the east as well but I offer no
routes for use on this page but would recommend that good map work would be
best applied before attempting to summit from either one of these directions. The route from the north is pretty direct and straightforward. See the GPS tracks posted by both Dennis Poulin and Ken Jones for the routes they both used and both were very similar.


Our parking spot for starting the hike was at: 40.2558 118.7370 (nad 27) elevation 5840' We headed directly up the slope and skirted some rock outcroppings when they presented themselves. 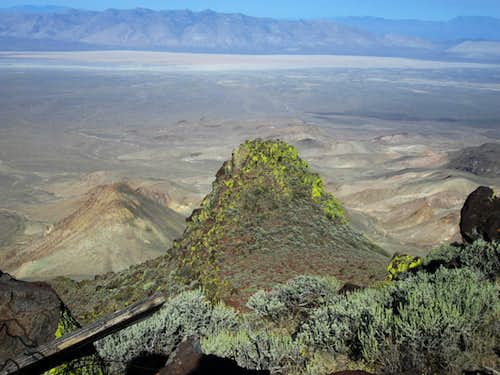 
None as this mountain is located on BLM land. More information might be available by contacting the BLM office located in Winnemucca. 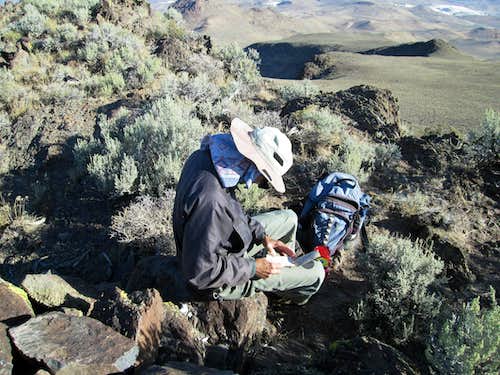 
This peak could be climbed in any season although it can get very hot in the summer due to the low elevation. Winter months access of course depends on the amount of snow but this mountain area has seen winter ascents. Dennis Poulin climbed this in January in 2011 and while it was cold, he didn't have any snow difficulties.

You could car camp off the road near the end of Nevada road 399 or anywhere you could practice leave no trace ethics. We car camped near where we started our hike but there are also motels in nearby Lovelock.

Those who have climbed this one:

I took pictures of all the register pages to have a record since registers sometimes disappear or get ruined but another resource for seeing who climbed a peak can be found at both Lists of John and peakbagger.com

About one or two people a year on average visit this summit which is located fairly close to Lovelock Nevada and has a black top road to with a few miles of the summit. Most of the visitors are those who are chasing the prominence peaks of Nevada.

Since my visit, several more have signed into the peakbagger summit register as is found HERE.

Visits to Trinity Peak by the Nevada Rambler