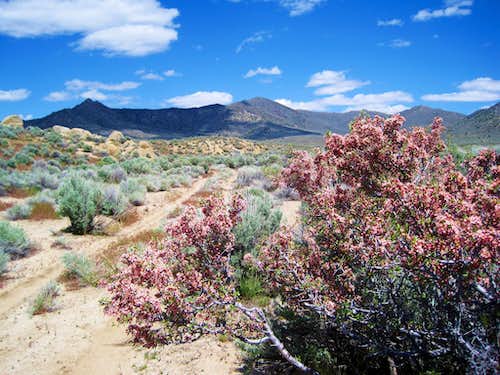 
In December of 2013, the Seven Troughs area hit the national headlines when a family of 6 went missing in the rugged backcountry of the Seven Troughs area. The family of six went missing after its Jeep swerved off the road, hopped an embankment and landed upside down in the remote Seven Troughs mountain range. They were found after an extensive search and all were OK but it is interesting that this was the way most people have heard about this isolated mountain range that is located north of Lovelock Nevada.

Seven Troughs Peak (also called Seven Troughs Benchmark) the Seven Troughs range highpoint is 7795 feet high and has almost 3000 feet of prominence, which puts it as the 66th most prominent peak in Nevada. It also comes in as the 395th most prominent peak in the lower 48 states so for those who chase prominence peaks, it is worthy of going after. Still, it is in an isolated and rarely visited area so one should be prepared  and have a vehicle with good clearance, 4 wheel drive, a couple spare tires and plenty of food and gas and water. During the time we were out there, we only passed one other vehicle in two days so do your mapwork and know where you are going. In our case, we traveled with two vehicles just in case one of the two should break down, we had a safety net of a second vehicle. The information contained n this page is to give you a good background only,  travel in this area is at your own risk as conditions can change so think of this as my disclaimer.

The Seven Troughs area was named for the seven watering troughs built by Frank Ware and other stockmen for the watering of their stock in this extremely arid country. In 1905 gold and silver were discovered by Joe Therien of Lovelock and this brought a lot of miners and activity to the area for awhile until the mines played out in 1918. A link to the key mining history can be found HERE.

I've placed several links below in the links section that will give you a flavor of the history of this interesting area. Also, watch for wild burros during your visit to the area, we saw a couple bands of them on the way in. 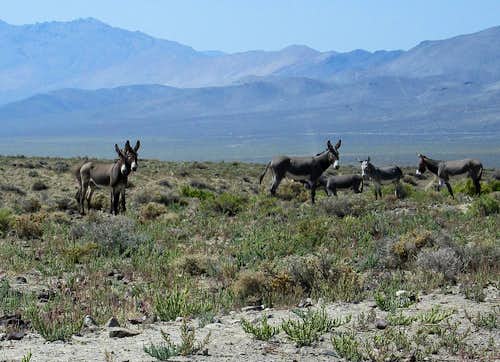 
There are several ways to get to the area and a study of Benchmark's mapbook of Nevada and topo maps are worth studying. I used Benchmark and made waypoints on most of the roads using my National geographic topo DVD. I will provide the information on the roads I used but I caution you to do your homework for getting out to this area and being sure to let others know where you are going and how long to expect you to be gone. Cell coverage is spotty and so be aware that once you get north of Lovelock, you may not have cell communication. Now to how I got there:

From Lovelock
I-80, exit 106 in Lovelock.(Remember that odometer readings may be slightly different for you) Take Main St west about .5 mile to N. Meridian and turn right. I went north on N. Meridian about 1.5 miles to Pitt Rd (NV 399). This is a good paved road heading west. At about 11.7 miles turn right on a good dirt signed Seven Troughs/Sulfur road.

In about 4.7 miles on this road take the left fork (signed) and in another 3.3 miles or so, the road takes a sharp left and heads toward a pass in the Seven Troughs Range. On the other side of the range at about 19+ miles from NV 399 I passed a corral on my left and in another 1.5 miles I turned right on an unsigned road that headed north up the Hannan/Seven Troughs valley. Please study your Benchmark mapbook pages 47 and 39 for more help if you need it.

Now it is straight up the valley between the Hannan and Seven Troughs ranges for almost 6 miles. Reaching a fork, the left branch goes toward the Hannan range and the right fork drops down into a big wash and in about 0.2 miles, take a right fork again. I followed this road about 2.0 miles where I turned right on a lesser road and headed east directly at Seven Troughs. In a mile I came onto another road where I turned right and then in another 100 yards turned left again into a wash and a very sandy road. These roads would be problematic if they were very wet. I followed this last road another 2.8 miles until it ended. I have provided waypoints for these on the  map below. At the end of the road, around 6200', there is room to park two or three vehicles nicely. 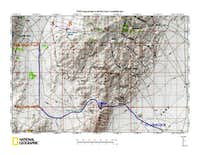 At the end of the road, animal trails head towards the mountain and it isn't all that far to get to the summit. We followed Dennis Poulin's route as presented at peakbagger.com (he has kindly included his GPS track). In Dennis's words: "I hiked through sagebrush up to the west ridge that leads to the summit. This is easy hiking and the route is obvious. There are a couple rocky outcroppins on the ridge that I passed on the right. The summit area was covered with lady bugs."

That pretty well sums it up. It is class 1 & 2 hiking and some talus is encountered but for the most part, it was straightforward. The elevation gain was under 1600' and the round trip was just over three miles. The key to getting this summit is the drive in. Its a long way from anywhere and you need to be self reliant when traveling in this part of Nevada. I recommend traveling in at least two vehicles so you have a safety net (oops, I think I already said that).

This is mountain is on BLM land and there is no red tape that I am aware of.
Questions could be directed to the BLM office in Winnemucca Nevada. 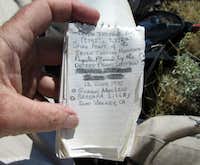 
Avoid the area when snow blocks the roads or during rain when roads might become impassable. Having said that, it is possible that this mountain could be climbed in any season although summer is prone to be very hot in this area.


As far as I can tell from the register and information found on peakbagger and lists of John, 16 people have climbed this peak since 1995.  The majority of these visitors have been during the the 2011 to 2014 time frame.


We car camped near the trailhead since it is fine to car camp on BLM if you use the leave no trace ethics. There are no campgrounds in the area but motels can be found in Lovelock,  Winnemucca or Fernley.

While you are out in this area,  plan on also visiting the high point for the Hannan range, it is directly across the valley to the west and can be driven to the trailhead from Seven Troughs trailhead in a reasonable amount of time.