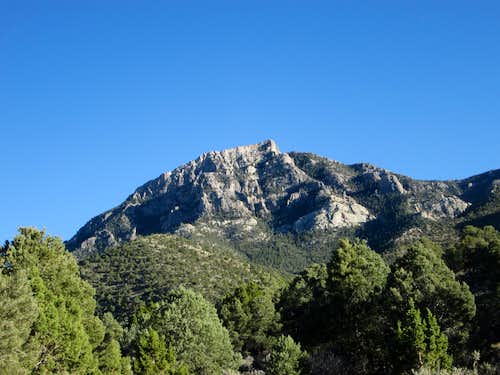 
Shingle Peak is the second loneliest peak I've climbed in Nevada. Only two people have signed the register on it in eleven years and Dennis and I doubled the visitation by our visit.

Why? I can think of a few answers.
1. There is no information on this one anywhere on the net.
2. There is no trail and route finding is really important.
3. It is very brushy and probably not a good place to visit during tick season.

There are some good reasons to visit it though:
1. It has almost 2900 feet of prominence.
2. It ranks 74th on the most prominent peaks in Nevada list. It is also the highpoint of the Far South Egans Wilderness.
3. It is now going to be easier due to the information you will find on this
page.

Located about 25 miles south of Lund Nevada and just off of highway 318, it has fairly easy access as will be explained below in the getting there section.

The origin of the name may come from the fact that at one time there was a logging operation in Sawmill Canyon and a shingle mill operated there.  The shingle mill was in production around the early 1900s and shingles were likely produced for the newly settled town of Lund, NV. Logging of Ponderosa pine trees occurred around the turn of the 20th century and the stumps in the canyon from the logging is one of the features you note when hiking towards the 7900 foot level where you head up a ridge that leads to the summit (see route below).    Although there is no information on  the net about this mountain,  I did get some help  from both John Vitz and Greg Jagielski who shared their approaches and opinions.  Greg  even created a map for me which was of great value.  He also shared the fact that it was one of his least favorite peaks due to the brush he had to deal with.  John approached it from the corral and spring area and that was the way we also started.  In contrast to Greg,  he really liked the mountain so let me know what you think if you visit this one.

Note:  Since Dennis and I visited this in Oct of 2014, three more have now made the summit of this one.  Eric Kassan with Anji  Cerney in March 2015 and in June,  Bob Sumner.  This information can be found HERE. 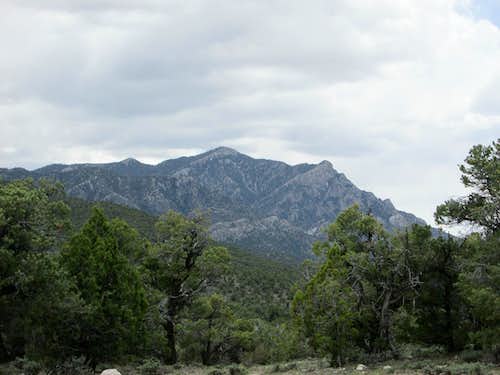 As seen from Shingle Pass

From Las Vegas, head north to Alamo and be sure to gas up either in Alamo or Ash Springs. From Alamo, it is close to 90 miles to the turn off for the Shingle Pass road just a few miles north of the Sunnyside rest area (which is on the left- see Benchmark map book).

A waypoint for the turn off (I can't remember seeing a sign) is 38.5204 115.0247 (nad 27) on the east side of highway 318. A good graded road heads east into the canyon and watch for a turn off into the corral at Shingle Spring about 5 and a third miles from highway 318. A forest service sign will be passed on the way in. The road will continue on up to Shingle Pass if you miss the corral/spring area but you shouldn't miss either the southern or northern driveway into the spring area. Park in this area (but away from the water tank) as this becomes the trailhead for the hike.

From the north, head southwest out of Ely on US 6 and take highway 318 past Lund about 24 miles to the same waypoint coordinates as shown above. If you pass the Sunnyside rest area, you've gone too far.

There is another way to the trailhead by going over Patterson Pass from US 93 but we found our way by studying our Benchmark Map book for this way and normally wouldn't recommend this unless you have a high clearance truck although the road could be driven by a passenger vehicle in most conditions.

Leave the trailhead at the corral area and head towards the drainage of Sawmill canyon. Dennis Poulin has been kind enough to provide his GPS track map on peakbagger and if you'll take the time to study his track on that map,
you will find the route as described below:

After leaving the the trailhead as mentioned above, contour over to the drainage and begin following it uphill for the next 2.25 miles during which you will gain close to 1600 feet of elevation. There is no trail but we found that the brush was not a stopper and found ways to weave in and around it. We saw plenty of stumps in the drainage and short sections of what might have been a road in the far distant past as this area had been logged. You will see what I mean if you enter this drainage canyon yourself. Just keep making your way up the drainage until you reach the 7900 foot level (waypoint  38.5162  114.9128 nad 27).  At this point, you need to get onto the ridge that you see in Dennis's track and begin the steep 2000' climb to the summit. This ridge worked well and by staying on it, we found the going very manageable and the footing good.

The peak is located on National Forest Service land and more information can be obtained by contacting:

The Ely Ranger District makes up 1.1 million acres of the Humboldt-Toiyabe National Forest and extends over three Nevada counties: Nye, White Pine and Lincoln. Ely, Nevada, located in the heart of the District, is the nearest town and houses the District office.

When to Climb / Weather

I'd recommend climbing this when it is snow free which could be any month of the year. The best time would be late spring to sometime in the fall before the first snows but I'd avoid the peak during thunderstorms.

The Ely Ranger district offers this information about the climate:

There is no organized campground in the area but car camping is possible in many spots. Try and utilize the "leave no trace" ethics and try and use places that others have used prior to your visit. Motels are available in Ely and Las Vegas. We car camped near the corral during our visit.

Why this was a special peak for us

Both Dennis and I had attemped to get this peak back in October 2013 but an early season snowstorm shut the mountain down for us as we car camped near the Sunnyside rest area. When we awoke in the morning we saw lots of new snow and decided to head south for some lower mountains and snow free hiking. We then headed down to do Silver Benchmark and the Seaman Range Highpoint and others leaving the snow zone behind us. So a year later, we were back in October to attempt Shingle once again but this time keeping our fingers crossed that snow would not factor into our plans. 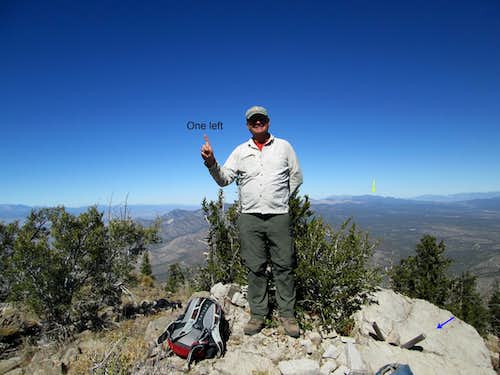 One more to go in Nevada


Shingle was important in another way, it would be the second to last peak that Dennis would need to complete his quest to summit all of the legal 2000 foot prominence peaks in Nevada. He had 165 of the 167 needed and by getting to the top of this one, he would tie the longtime pioneer and leader of Nevada prominence peakbagging, John Vitz at 166. It was John Vitz who first climbed this one back in 2003 and until 2012 had been the only one who we knew in the prominence peakbagging ranks that had done it. Greg Jagielski joined him when he climbed the mountain in 2012.

For me, it would be my 152nd Nevada 2000 foot prominence peak and would be a key peak in my own personal goal to get up to where John Vitz and Dennis are.
I also considered it a bit of a vendetta peak since the weather had foiled us the year before. Chasing the Nevada prominence list has been filled with so many special adventures and has taken me to the nooks and crannies of a history filled state that still felt like the Pony Express and mining towns had just happened. Most people think that Nevada is just a big desert and yet they really haven't a clue to the riches of scenery and surprises that keeps me heading back. No, when I finish the Nevada prominence list, I won't be finished with Nevada, I love the place. You would too if you'd been able to see and visit all the places I have in the past 10 years.

A special shout out:
Some great companions in my  prominence quest have been Dennis of course,  Ken jones,  Greg Jagielski,  Kadee Smith,   Al Sandorf,  Eric Kassan,  Richard Carey, Brett Hathaway,  Tracy Foutz but I really thank Dennis and Ken for sharing so many adventures together. 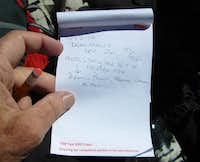 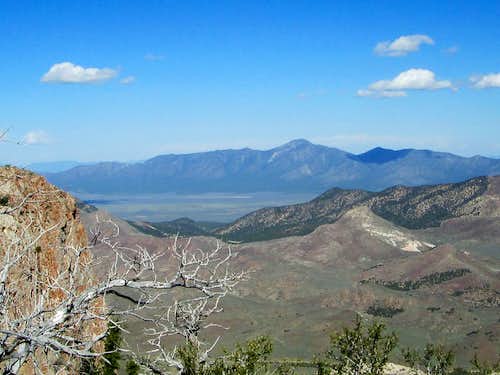 Looking west at Shingle Peak from Dutch John
Since Shingle Peak is the highpoint of this wilderness, it is worthwhile to note a few facts about  it :

The Far South Egans Wilderness now contains a total of 36,384 acres and is managed by the Bureau of Land Management. All of the Wilderness is in the state of Nevada. In 2004 the Far South Egans Wilderness became part of the now over 109 million acre National Wilderness Preservation System.
Regulations:
Motorized equipment and equipment used for mechanical transport are generally prohibited on all federal lands designated as wilderness. This includes the use of motor vehicles (including OHVs), motorboats, motorized equipment, bicycles, hang gliders, wagons, carts, portage wheels, and the landing of aircraft including helicopters, unless provided for in specific legislation. In a few areas some exceptions allowing the use of motorized equipment or mechanical transport are described in the special regulations in effect for a specific area. Contact the agency for more information about regulations or for more information about the area.

The Far South Egans Wilderness is located in east-central Nevada within Lincoln and Nye Counties. It lies fifty miles south of Ely, 200 miles North of Las Vegas, along U.S. Highway 318.
Access to this Wilderness from Ely, Nevada is on federal highway 6 westbound approximately 23 miles, southbound on state highway 318 through the town of Lund approximately 38 miles to Shingle Pass. You may continue down federal highway 6 southbound 8 miles then southeast on BLM road 4055 which turns into the eastern border of the Wilderness.

The wild, rugged Far South Egans Wilderness is an impressive area with sheer rock cliffs rising up from deeply-cut canyons, thick forests of pinyon-juniper and occasional ponderosa pine mixed with ancient bristlecone pine, hidden caves and shelters, and gently sloping alluvial fans presenting extensive vistas into the adjoining valleys and neighboring mountain ranges. The area has been largely untouched by human developments other than a rehabilitated logging operation in Sawmill Canyon which is considered a special feature of historical value and also an excellent example of how the landscape can restore itself over time. This variety of terrain provides excellent wildlife habitat for mule deer, bighorn sheep, elk, cougar and raptors such as golden eagles and ferruginous hawks. The geological and topographical features of the area also provide endless opportunities for visitors to find solitude and opportunities for outstanding primitive recreation.

Proof that I was there beyond a signature in a register book.  See honey,  I was in Nevada as I said I was. 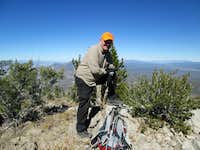 Another inspiring page, Dean! I love exploring Nevada, and though I doubt I'll ever get around quite as much as you have, it's always fascinating to see these glimpses of the state's backcountry. It's probably worth mentioning in your intro and/or red tape sections that this peak is located in (and the highpoint of) the Far South Egans Wilderness.

Thanks for the comments and I'll add the Wilderness info. : )