Although visited infrequently, it can be argued that to thousands of hikers, Mt Hitchcock is one of the most familiar peaks in the High Sierra. Its fluted, vertical north face is the first thing people see as they reach Trail Crest along the Main Mt Whitney trail and Mt Hitchcock is the prominent view for most of the two miles returning from Mt Whitney’s summit back to Trail Crest. Spectacular as it is to look at, the view from Mt Hitchcock isn’t as impressive as Mt Whitney’s uninspiring west face dominates the skyline. The trick to ascending Mt Hitchcock is not the actual scrambling route but getting a Mt Whitney zone pass for the standard route to the summit.

Mt Hitchcock is one of the 248 peaks listed by the Sierra Peaks Section of the Sierra Club Angeles Chapter. According to Francis P. Farquhar’s Place Names of the High Sierra (1926), “on Tuesday, September 7, 1881, Rev. F. H. Wales, of Tulare, climbed Mount Young, where he built a monument and left a record of its name, ‘and the name of another handsome peak just south of it, which, from his suggestion, was named Mount Hitchcock.’ (Elliott: Guide to the Grand and Sublime Scenery of the Sierra Nevada, 1883, pp. 49-50.)” Charles Henry Hitchcock (1836-1919) was a professor of geology at Dartmouth College from 1868-1908 and probably taught Reverend Wales during his collegiate days. Hitchcock also served as the State Geologist for both Maine and New Hampshire. (Source: Wikipedia) 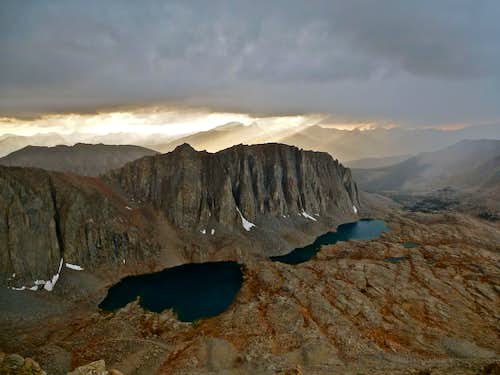 Mt Hitchcock is easiest approached from the Mt Whitney Portal along the Main Mt Whitney trail. The Portal lies about 13 miles west of the town of Lone Pine. Horseshoe Meadows is used for either Cottonwood Pass or one of the Army passes. The Horseshoe Meadows road junction is a left off the Mt Whitney Portal road about 3 miles west of Lone Pine. A further 19 miles gets you to the road split between the two possible trailheads. Finally, for the more difficult Meysan Lakes trail approach, the Meysan Lakes trailhead is just outside the Portal campground on a wide shoulder off the Portal road.

The approach to Mt Hitchcock is relatively easy as it lies just west of the Sierra Crest and is a scant mile and a half from the busiest trail in the High Sierra. The fastest approach is via the Mt Whitney trail which can be used to access the east ridge from “Discovery Pass”. About a ¼ mile past Discovery Pass, the Whitney trail meets the junction with the JMT which can be used for
the approach to either the Hitchcock Lakes or Crabtree Meadows. The PCT can be used to approach Crabtree Meadows or the Crabtree Lakes (via the spur Crabtree Lakes trail) by entering either from Cottonwood Pass or over one of the Army Passes. For those seeking adventure (no permit and don’t want to spend days getting in via Horseshoe Meadows), the Meysan Lakes trail can be used in a indirect way to reach Crabtree Lakes or Discovery Pass but it’s a tough climb over a high saddle. 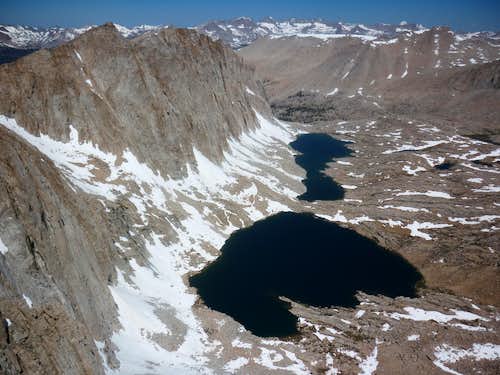 There are some technical routes on Mt Hitchcock’s north face but most of the routes are in the class 2 range with possible some class 3 moves:

• East Ridge: Class 2 from Discovery Pass along a blocky and sometimes tedious ridgeline. Hike up to Discovery Pass on steep talus from the final switchback just east of Trail Crest.


• North Chute: Class 1/2 sandy chute from Hitchcock Lakes adjacent to Guitar Lake and the JMT. From the top of the chute, climb directly west to the summit 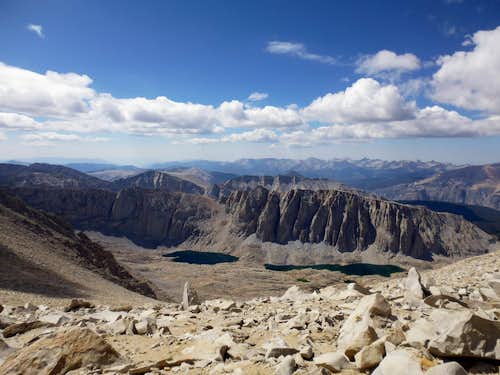 NOAA weather can be found here. For winter considerations, the Mt Whitney page has excellent resources on what to expect. The east ridge of Mt Hitchcock would make an excellent climb in the winter.

Wilderness Permits: If approaching Mt Hitchcock using the standard route along the east ridge, you must obtain a Mt Whitney special area permit to hike up the Main Mt Whitney trail. Permits can be obtained from Reservation.gov through the lottery process or as a walk in the day before. Directions on how to obtain permits can be found on the Inyo National Forest website. If you choose to backpack in using a different trailhead (such as one of the two trailheads from Horseshoe Meadows or Meysan Lakes), you will still need an exit permit if you plan to descend (actually Discovery Pass is higher that Mt Hitchcock) using the main Mt Whitney trail. Overnight entry using any other trailhead still requires a permit but through an easier process than the lottery. Some pictures from my hike