Mt. Hood: Enjoying the Present while Honoring the Past

Mt. Hood: Enjoying the Present while Honoring the Past 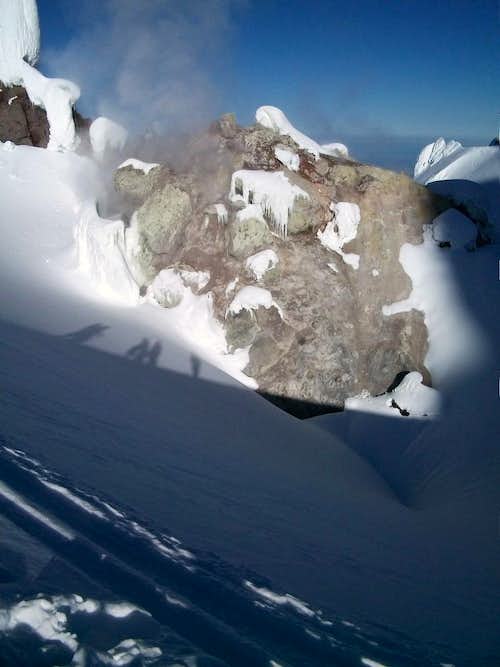 A Tribute to The Fallen Climbers 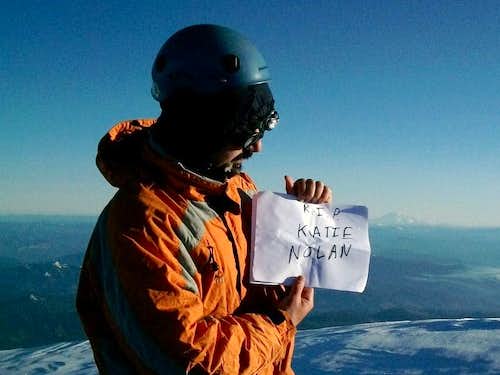 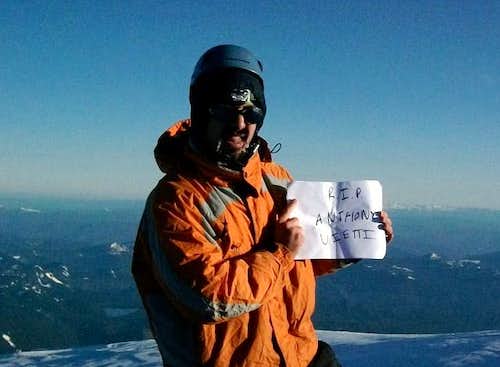 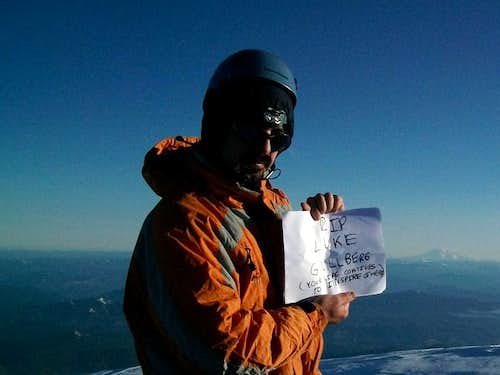 Before I begin writing yet another Mount Hood trip report stating and showing the success and struggles I had on Mount Hood, I want to pay a respect for Luke Gullberg, Katie Nolan and Anthony Vietti. For those who didn’t know the story about these three climbers, they were the climbers who passed away on Mount Hood in December of 2009. Though I didn’t know Katie Nolan or Anthony Vietti, I talked to Luke briefly at REI about Mount Hood, and Rainier. He was one of the nicest people I have ever ran into and he had a true passion for climbing. It was literally a week or two before he passed away on Mount Hood when I talked to him. I decided to make a sign for each of them in order to pay my respects to those three climbers. I want all who climb Mount Hood to keep these three climbers in mind.

A Trip that Almost Didn't Happen

The trip itself up to Mount Hood had many obstacles. I tried to setup this trip early with my club but there were a number of concerns about the trip. After solving that obstacles I had planned the trip for May 1st only to find out that I wasn’t going to get the time off for that weekend and had to setup the climb for the following weekend. I will just say this statement in that it turned out to be a blessing because May 1st -2nd was absolute horrible in terms of weather. Then due to the bad weather, special avalanche bulletins were warning climbers of high avalanche danger through the week and weekend of May 8th and 9th . The final obstacle was the fact that I came down with a brief cold on Thursday probably due my nerves about leading my first trip with the club and wanting to pay my respects for the climbers. But when I saw that the nights on Hood were dropping into the teens, and they would be clear with the weather was looking good I knew I had to make the trip happen and give the peak a shot.

The game plan was to leave the parking lot at 10:30 with the other people I was leading. I had no idea how fast they were going to be so I had to err on the side of caution. I wanted absolutely no sun going up on this mountain, especially with the avalanche danger projected to be higher than normal. I also knew that I could summit this peak in under 5 hours but I didn’t know much about my crew except they were all Rainier veteran and were all grads of my Glacier climbing class. I also made sure to let them know that I was more concerned about their safety than about the summit and that I rather have them pissed at me than injured or worse. I remember my experiences last year on Hood. That lead me to decide not to rope up for this climb. I personally saw it being more of a danger than a help for the Old Chute.

Not a Promising Beginning

Then came the day of the climb at 10:30 we got the crew ready and it was time to head up for Hood. There was seven of us in the beginning. We made great progress heading up Mount Hood. But unfortunately at 7000 feet one of our members had to turn around due to food poisoning from a sandwich he ate about four hours before. At 7800 feet though the trip lost two more members. One of the members sprained an ankle while traversing through the snow. This forced one of our MOFA certified members and our most experienced climber to head down with him back to the ski lodge. I want to thank her very much because she had never been to Mount Hood and always wanted to summit the mountain. I hope she gets her chance with Hood soon.

Up to the Hogsback

It did shake me up a little so I talked to other remaining climbers and told them that we are going up to Palmer Lift and then we take it one step at a time from there. Amazingly we made to the Palmer Lift in under two hours. This news was not good news because it was 12:30 and only had 2600 feet to go. At the pace we were going we were going to summit at 3:30! So I decided to slow the pace here and take a couple small breaks. When we made the Hogsback at 3:15 am we all decided to take a thirty minute break there and boil up some water and eat some food. It was probably the coldest thirty minutes I ever had in my life and despite the down jacket and being triple layered I was extremely cold. Not to mention the sulfur in the crater was pretty strong, though not as strong as my first attempt. The cold air though gave me great hope that the snow would freeze enough to considerably lower the avalanche danger. It turns out I was right.

After that break we pressed on. We first followed the footprints up the Hogsback a little bit until we realized that it was heading to the Pearly Gates which from what I read on other reports was not a good way to go this year. I though that the footprints were going to cut over the Old Chute from a report I read earlier this year on SP but they were not (PS the bergshrund is not even close to being open yet)! So when I recognized this I decided to head down and cut over to a lighter used path to the crater and head the chute. By this time this 4:00 and the sky was beginning to brighten up. 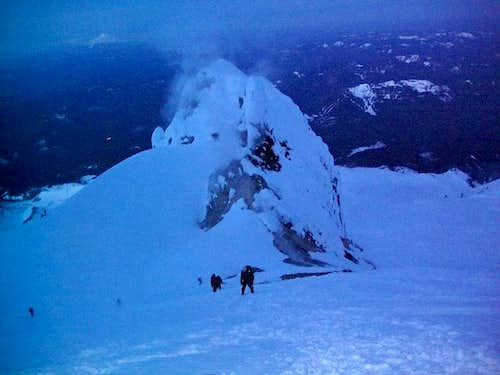 On the way up

Perfect Conditions in the Old Chute 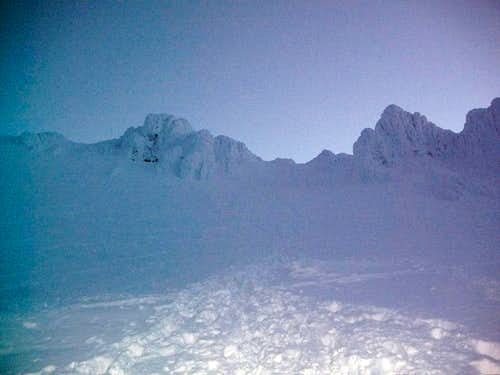 Dawn on the Old Chute

The conditions in the Old Chute had formed perfectly though. The was firm foot of snow and the steps up were absolutely perfect. In fact I saw glissade shoots in the Hogsback. Under normal conditions I would have thought these people were on something, but the snow was such that if you fell you WERE NOT GOING ANYWHERE! Instead at 600 feet of terrific snow climbing which those who know me know that I thrive on a good snow climb. I felt as if I was in heaven going up the Old Chute. Even with the great conditions, going up 40-45 degrees of snow still is tiring at 11,000 feet when you spend most of your time near sea level. I took lead here and headed up the chute. On the way up I notice to the right a slightly steeper shoot that was well worn that to the right the made route of the Old Chute. I cut up there and when I topped out on it I realized that the route I did actually avoided the knife edge that I crossed the last time. I waited for my teammates on the of the chute as they climbed up the steep chute one by one I watched them come through as the sun rose behind me. 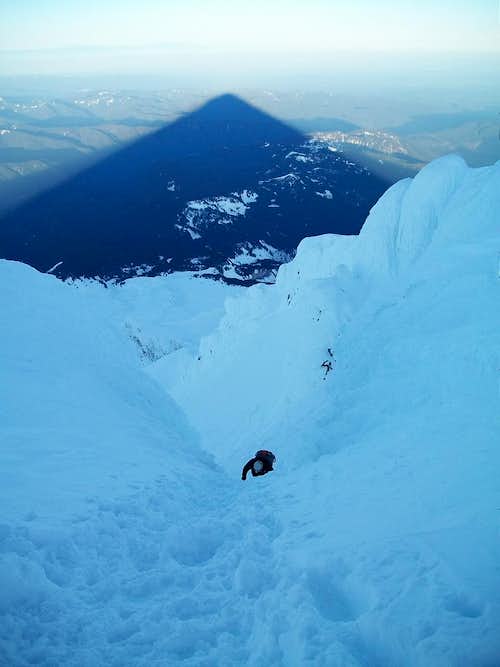 Almost up the Gully

The Summit: A Place to Remember and Enjoy 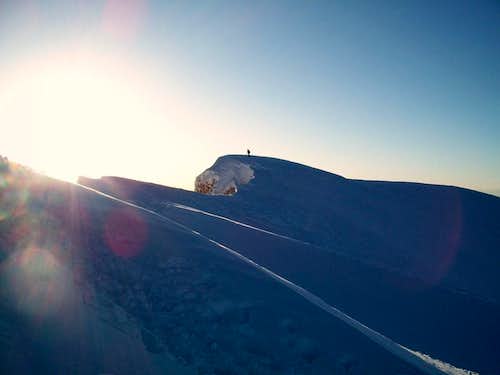 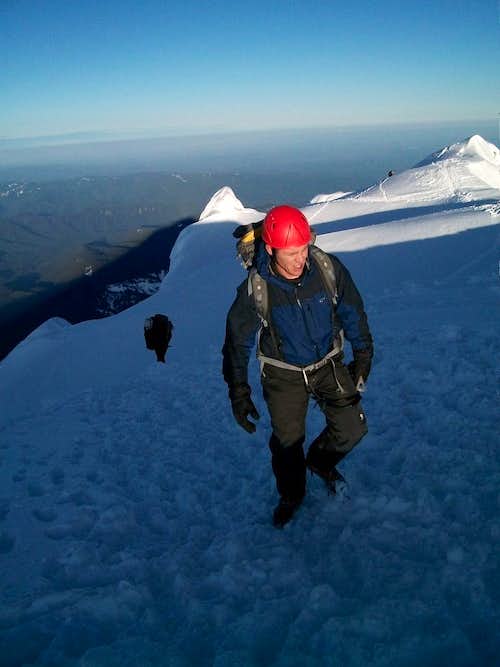 Getting to the top!!

Once passed the chute it was only another five to ten minutes to the summit of Mount Hood. Once on the gem we all took or time to remember those who passed away and thank the mountain for giving us the chance to enjoy the beauty of it. We were only the second group of people that day to make it that day and we had the summit to ourselves for ten minutes. For me it wasn’t so much a celebration but a time to pay my respects. I had already summited Mount Hood last year, but was happy for the others in the group. It was their first time and they had a perfectly clear day to enjoy this beauty. The sun was also keeping us warmer so we didn’t need to rush off too quickly yet. But after thirty minutes when we noticed the crowds starting to come in we knew it was time to go. Besides the snow was going to soften up more and the avalanche danger was going to begin to rise by the hour. 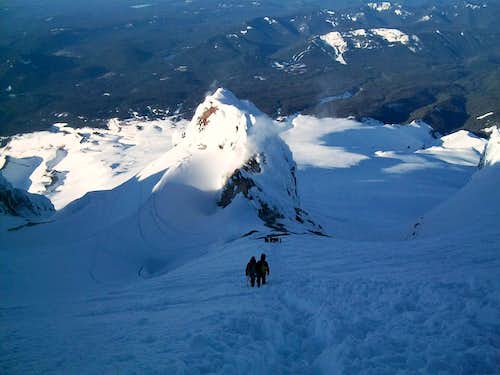 Descending in perfect conditions
We decided to descent the same way we came up. We down climbed through the chute. On the way down my crampon slipped off my right foot. Luckily it was still tied on so I had another in my crew connect back onto my foot. It is never fun having your crampons slide off when you are in the crux but at least the snow was in good condition. After that little bit of excitement it was a smooth trip back to the Hogsback. We made a quick dash past the Hogsback and head down the mountain. I realized I left my Wal-Mart trekking pole at the Hogsback unfortunately. It is blue and a little bent. If you find it, it is yours to keep. Once on the lower slopes we did a number of icy glissades down roughly 1000 feet to the base of Palmer lift. And just cruised back from there. We made it back by 9:30 am and soon we were on our way back. 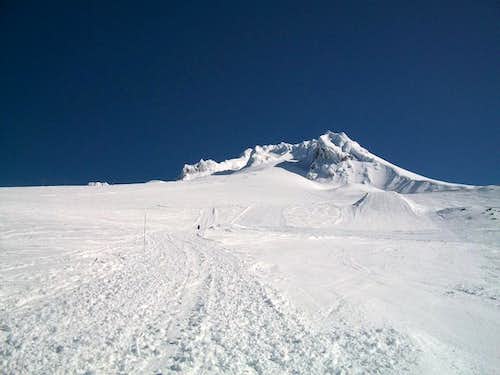 Looking back at Mount Hood

Heading back we were greeted by the poor climber who had food poisoning the night before. He was in much better shape and he was great shape to drive us back. The other two headed back as soon as they got down and both made it back safely. I want to though thank all for coming out. Though not everyone made the summit all of people made great contributions in order to make this trip a major success. I also want to they Mount Hood for giving me this chance to honor those climbers and to run a successful first trip with my club.

View Mt. Hood: Enjoying the Present while Honoring the Past Image Gallery - 25 Images

You posted the photo of the Anthony sign twice...

... but where is the photo for the Katie sign?

Note that your climb date is listed as June 2010.

This was the best beta I've had in two weeks for Mt. Hood. Thanks and congratulations. If weather permits, I'll be about a week behind you, so hope the conditions are as good as you mention.

Thanks for posting, and also for the tribute to friends of mine.

Well done on a worthy summit.

amazing if I could climb to the mountain, it is wonderful