Newman Peak is the highest point of the Picacho Mountains, a compact range with impressive prominence located in the desert about 45 miles north of Tucson. Interstate-10 crests the range over a low saddle connecting well-known Picacho Peak to the west, and the main body of the Picacho Range, including Newman Peak, to the east. However, Newman Peak hides in plain sight: despite its impressive profile and prominence, Newman Peak is difficult to access and very few people actually attempt its summit. The communications towers are accessed by helicopter, and most hikers will probably opt for the developed Picacho Peak State Park on the opposite side of the freeway. However, for the truly dedicated (and patient), a hike up Newman Peak is a challenging and fun dayhike up brushy and rocky slopes, with just enough obstacles to make you feel like you earned this desert gem.

For history fans, the pass between Picacho Peak and Newman Peak was the site of the only Civil War battle to be fought in the Arizona Territory. 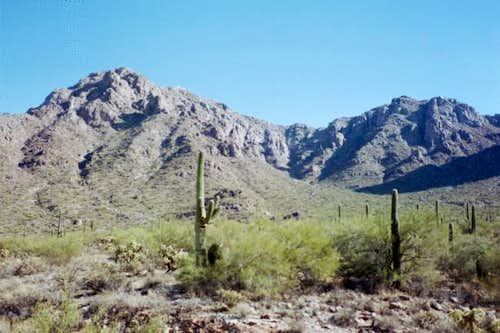 Newman Peak as seen from the north (by streeyyr)

The washout in the road (by streeyyr)
From the north: From Interstate 10 in Picacho, take Exit 219, and drive 2.4 miles northwest on the frontage road. Turn right onto an unmarked dirt road, cross the railroad tracks, and drive through an unlocked gate. Once past the gate, turn left and drive north for 0.6 miles. The road then curves right, then crosses a big washout in the road. Some vehicles may not be able to make it further. Once past the washout, continue northeast on the road for 0.8 miles. You will then reach some power lines. Continue ahead for 1.7 more miles on the road as it parallels the power lines. There are some intersecting roads here, but stay on the powerline road. If you look off to your right here, you will see the Central Arizona Project (CAP) canal a short distance away. You should also be able to see some white signs on a fence along the canal. That’s the bridge crossing over the canal. After 1.7 miles, turn right at a road junction, and drive about 0.2 miles to a parking area next to the canal. The canal is not shown on the topo map.

From the south: Take the Picacho Exit and proceed southeast on the east frontage road about 3 miles to Park Link Road. Turn left (northeast) onto Park Link, pass over some railroad tracks, and after 0.7 mile, turn left (north) onto Pecan Road, which is dirt. Go north/straight on Pecan for 2 miles pass Bud Antle Ranch. Pass a wire gate and proceed another 2 miles on lesser road across desert plains. The road then bends left and then right. This is shown on the topo map. The road is very sandy here. When the road starts to go north again, look for a left turn onto an unmarked dirt road going WSW. Follow it about a mile. It will bend north, then west and come to a large gate bordering the state lands. Pass through this gate, drop into a broad wash, then angle left out of the wash, aiming generally WSW toward a stand of tamarisk. You'll come to another gate and pass over the CAP canal. Now on private land, follow this easement west about one mile to a bridge over the CAP canal. Go right (north) over this bridge, back onto state lands. Follow the track as it bends northeast to a junction. Go left and proceed as far north as you can before the road becomes way to rocky to be driven. A large turnaround near a fence line is as far as most 4wd will get. The road hereafter is undrivable. There are numerous pullouts along the way. Important (Feb 2013): there is significant work being down on the railroads and some roads may be shut. In Feb 2013, the Park Link Road access over the railroad tracks was closed indefinitely.

The topo maps do not show these lesser roads nor the CAP canal. Google-earth images do show these roads, so you should print out a few of those as well. Allow an hour to make this drive. 4wd is mandatory. 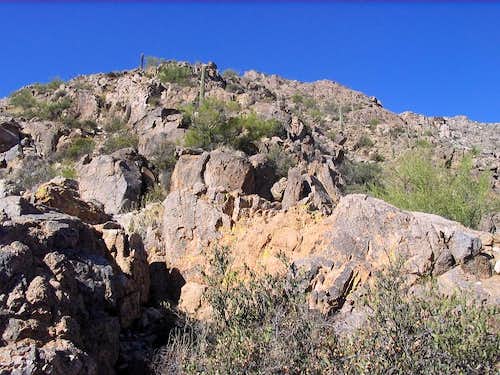 Newman Peak is on BLM land, but it completely is surrounded by a checkerboard of private and state-owned lands. Access onto state lands requires a permit:

Chances are no one will check, but during hunting season (Dec-Jan), officers may be milling about, so it's probably best to have one just in case. Easements across private lands allow access onto the state lands.

This peak is best climbed in winter when temperatures are cool and usually dry. Best times are usually November to April, but even then it can be warm during the shoulder months. 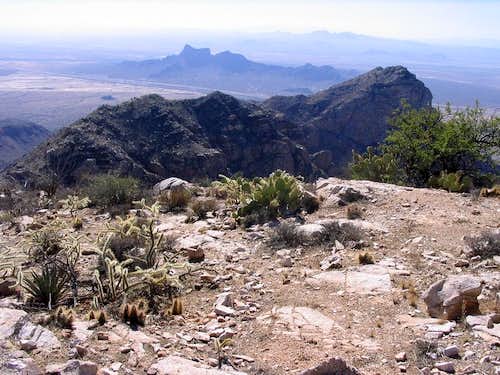 Camping is available at the nearby Picacho Peak State Park. Bush-camping is possible along roads near the peak. Be sure to be off private lands, and re-use campsites if possible.

Basic lodging is also available in Eloy (about 20 miles north) and of course, Tucson to the south.