The Kaibab Plateau is a giant uplifted land formation roughly 60 miles north to south and 25 miles east to west, located in northern Arizona north of (and bordering) the Grand Canyon. It is this plateau's southern cliffs that one sees when viewing across from the South Rim within the Grand Canyon National Park, and on which the North Rim lodges and buildings are located. The plateau is surrounded on its west, south and east by giant cliffs, themselves cut by innumerable canyons, while to the north the land slopes downward on a gentler grade. The southern portion of the plateau is within the Grand Canyon National Park, while the bulk of the remainder is managed as the Kaibab National Forest. 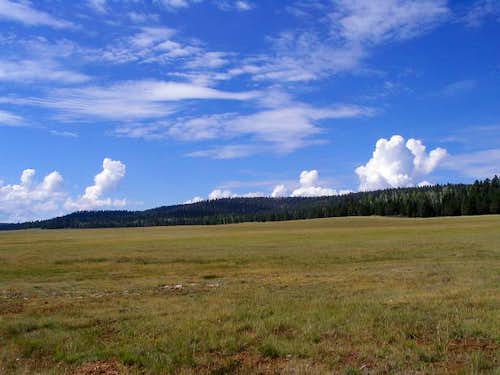 The Kaibab Plateau is a mix of heavily-forest ridges and beautiful grassy meadows.

These large plateaus present a challenge in classification, for they do not appear to be mountains in the usual sense (whether visually or in their geomorphology), yet they have prominence values that would rank them very high on any list of major peaks. These plateaus are common in the western United States, with many congregated in Utah (for example, the Aquarius Plateau and the Fishlake Hightop Plateau) and parts of Northern Arizona. In fact, most of the 'high country' in Northeast Arizona, Central and Eastern Utah, Northwest New Mexico and Western Colorado sits atop the gigantic Colorado Plateau. Think of plateaus atop plateaus!

The Kaibab Plateau's top is a scape of rolling forested hills and subalpine grassy meadows. The highest point on this plateau is a small area at 9,200+ feet in elevation, making what seems to be a simple little hill the 14th-most prominent point within Arizona, with 3,580 feet of clean prominence. A number of areas reach above 9,160 feet, including the highpoint of the Grand Canyon National Park at a lookout and abandoned residence once used by Edward Abbey.

Both of these hikes are short and very simple, but they are so remote that by themselves, they wouldn't warrant the driving distance and mileage to get there. As an enticement, the Grand Canyon offers fine views and hiking trails, and is one of the nicer holes in the ground, so I hear. For those of you who get to this far corner of Arizona, spend a few days in and around the Canyon, the Kaibab Highpoints make for a nice easy outing to pad your highpointing totals.

The lodge at Jacob Lake will be your likely starting point. Jacob Lake is located on the northern half of the Plateau, at the intersections of US-89-Alt and AZ-67. From Phoenix it's about a 320-mile drive up Interstate-17 and US-89 and 89-Alt via Flagstaff and the Navajo Nation. Views along the drive are outstanding, including the sheer cliffs of the Vermillions. From Las Vegas, take Interstate-15 to St. George UT, then your choice of highways through either Hurricane, Colorado City, Fredonia to US-89-Alt, or through Kanab via Zion National Park (another visually pleasing place to visit!).

State highway AZ-67 runs south from Jacob Lake about 45 miles to the Grand Canyon Lodge at the North Rim. The various plateau highpoints are about half-way along this drive.

This highway is closed during winter. The plateau gets very heavy snow, and the roads are not plowed. Check with the Forest Service for road information. Highway AZ-67 Road Information and links. The Grand Canyon National Park on the North Rim remains open during the winter, but the trick is getting there. The few Rim-to-Rim hikers will be the only visitors during this time. A skeleton support staff manages the area in winter.

There are no fees to access the Kaibab Plateau Highpoint.

There is a $25/vehicle fee to enter the Grand Canyon National Park.

You have many excellent camping options on the Kaibab Plateau:

• The Kiabab Camper Village has room for tents and RVs. It is near (less than a mile) the Jacob Lake lodge. Here, you can view Jacob Lake itself - a tiny sinkhole with brackish water. We have dubbed it the Jacob Damp Area. Nevertheless, the fees here are reasonable, and is convenient to the lodge. You can reserve a tent space ahead of time at the Kaibab Camper Village.

• The Jacob Lake Lodge has rooms for those who want a bed and shower. The lodge has a restaurant and basic mini-mart, and a display case of amazing cookies. These are worth it alone for the trip! There is a Chevron gas station as well.

• The Forest Service maintains camping at Jacob Lake and DeMotte Park, 25 miles south of Jacob Lake. The Kaibab Lodge is also located here. These are very near the Kaibab Plateau highpoint. A small country store across the highway has gas and basic goods. DeMotte is first-come, first-serve.

• The National Park Service manages a large campground at the North Rim itself, as well as cabin-style lodging.

• Lastly, scatter-camping is allowed on all National Forest lands apart from any water sources and within 1/4-mile of any road. Scatter camping is not allowed within the National Park.

How would you feel to know that after a grueling Rim-to-Rim hike from South to North, that you could have bagged an easy prom peak on your drive out? Silly, I'd bet. To save you the shame, here's what you do:

Find Kaibab Forest Road 22 south of the Kaibab Lodge, about 25 miles south of Jacob Lake and about 5 miles north of the North Rim Entrance Station (near milepost 606). Drive 2 miles up this good all-weather road to its junction with Forest Road 270. Hike or drive south on FR-270 for 1.2 miles to a slight rise at a bend. This is it! Walk around to your satisfaction. 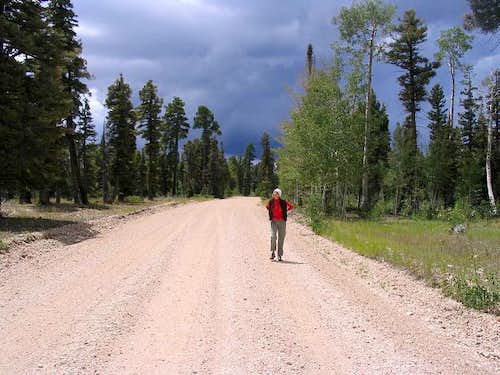 There are actually four distinct areas within the boundaries of the National Park that reach above 9,160 feet. One has a lookout and an old residence, and is marked with a 9,165-foot spot elevation.

The trailhead, so to speak, is the small service-vehicle pullout just a few feet east of the Entrance Station. Walk in, bear left at a residence, and then right, passing a locked gate. An old road leads about 1.5 miles to the top, with about 350 feet of gain. This is now part of the Arizona Trail, a new system of trails spanning the state from north to south. The ranger assured me this road is open to the public for hiking, and he clued me in on the history of the dilapidated residence on the top, once belonging to Edward Abbey. The 'peak' is unnamed on the map, but a brass disk from the 1930s calls it the North Rim Lookout. The lookout tower itself appears to be still in use.

Another area above 9,160 feet is just northwest of the lookout, astride the road. Just walk up and pace the area, if you feel it's important enough.

Two other areas are located along Forest Road 610, along the Park's northern boundary. Although just about 4 miles east of the lookout, you'll need to backtrack north then back south and east to get to them. They aren't really that interesting, but the drive is, so I suggest it anyway. Drive back north on AZ-67 to FR-611, which is directly across from FR-22 mentioned above. FR-611 heads east, then curls around a hill. About a mile in, turn right onto FR-610 and go south. FR-610 eventually bends east and parallels the boundary (which you may note from some old fencing and US NPS signs nailed to the trees). The other two GCNP HPs are along the road, where the road tops off before making a hard dog-leg right. Pace the area - I spent maybe 10 seconds here myself.

Definitely continue east on FR-610. The road now runs southeasterly in a thick forest, and the road's quality deteriorates a bit. Fourteen miles from AZ-67, the road comes to the Saddle Mountain Trailhead, with stunning views of the Canyon (without the crowds), including some possible scatter-camping spots right on the rim itself. How cool is that?

Topo Map of the Lookout (and nearby areas) 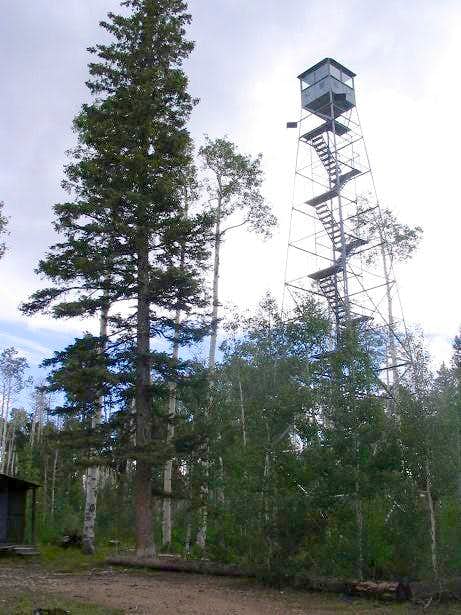 Details on Highpoints of the North and South Units of the National Park, rim and otherwise

Gerry Roach & Dave Covill visited some south-side candidates, with two GPS units and an altimeter and handlevel. There are FOUR candidates for highest point of the Grand Canyon National Park on the south side. There is one more area OUTSIDE of the park, which is ~50 feet higher; Grandview BM and Lookout Tower.

This one is the largest, at the intersection of the paved park hwy with the paved Grandview Point road. The highpoint is west of the X, in middle of West lobe, and by GPS about 7,496-7,500 feet. flattish, wooded knoll. Left a cairn. The place along the road northbound downhill to Grandview Point was also high, and we got 7,494-7,499 feet.

This one straddles the National Park boundary with the Preserve and Forest further South of that. Open Woods. gently uphill, noticeable rise from road. By GPS we got 7,495-7,505 feet.

This is the northern extension across the National Park boundary of the Grandview tower contour.


From the map above one can easily see the Grandview Lookout Tower. It has a BM which on the map is denoted as 7,490'; but this is clearly in error. It says on the ground a BM of 7,550 feet, and we got about that via GPS units and altimeter, which was set for reference purposes at 7,467 feet at the road junction 1 mile north of there.

Here lies Desert View Point, with Navajo BM. We got GPS readings lower than 7,500' there, two days later. It would be good for a person to go to all of these points on a single day, in a span of 2-3 hours, and get more readings.

I deduce that BM Navajo is the highest point on the South Rim of the Grand Canyon National Park. This is indisputable. I believe 90% likelihood that the knoll near Hearst Tanks is the HP of the Grand Canyon National Park South Unit (e.g., not necessarily along the rim), by 5 to 10 feet over other spots. Grandview Lookout Tower is the Highest Point of the entire South Side Plateau.

The Highpoint of Grand Canyon National Park is well-known; 4 spots along the North boundary edge (see main content of this page), including near a tower. East of there lies the Highpoint of the North Rim.


There are several spots where it could be highest, I visited a decade ago and determined the "X" to be highest.

The highest Major Point WITHIN the Canyon is little known. Gerry has been there, and fairly recently at that. It is Saddle Mountain, 8,424 feet, with a prom of close to 900 feet.

These can be visited together of course, along west the North Rim HP.