Cochise Head is a landmark rock formation in the Chiricahua Mountains in the southeast corner of Arizona and can be seen from further away when approaching the mountain range. The name is aptly chosen as the formation looks like...well, like a head. Besides that it looks very cool, Cochise Head has 1913 feet of clean prominence which earns it the number 83 on the Arizona prominence list. The approach to the peak is within the Chiricahua National Monument (see Getting There) though the actual peak lies outside the monument's borders. The entire area was burned by the Horseshoe 2 Fire in 2011 so that a trail which once existed from the road to Woods Canyon Saddle (see Route) is now essentially gone making the hike tougher than the round trip distance would indicate. 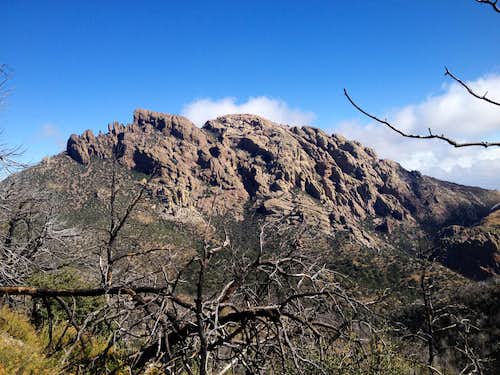 Cochise Head: from left to right you see the chin, whiskers, nose and the forehead; the nose is the highpoint

From the town of Willcox, AZ, take AZ-186 East for 31 miles to the well signed turnoff to the Chiricahua National Monument and turn onto AZ-181 East. As you enter the Monument (there is a gate and a visitor center) the road is named Bonita Canyon Dr. The trailhead is reached after 5.6 miles from the entrance to the Monument; there is a gate with a dirt road on the left hand side however you can't park there. Continue to drive up the road for another quarter of a mile when you come to a turn-off on your left hand side with enough room for 4-5 vehicles to park. There is an interpretive sign at the parking area as well. From the parking area walk down to the actual trailhead.

Follow the dirt road for a little over a mile to the King of Lead Mine; past the mine the road becomes more overgrown.  After about 1.5 miles you will come to an area where the road flattens out and you will have to make a left turn at a cairn that can easily be overlooked aiming for a grassy slope. Do not follow the road to the very end as we did on our first attempt and try to get to the peak from there. 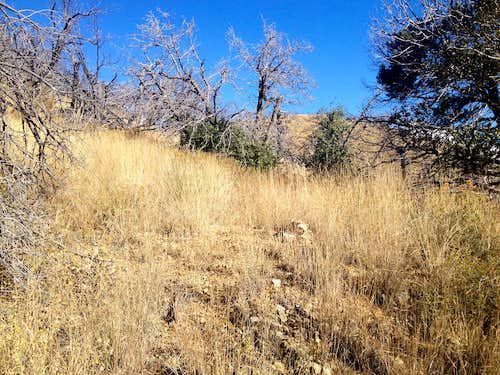 Turn left here from the road; note the cairn in the grass

From the cairn hike up the grassy slope until you reach a saddle; from here you will have the first view of the peak and you can see the remainder of the route. Hike down the slopes in a north-northwesterly direction aiming for a saddle below the peak. You will have to cross a deep and steep wash to get there and this section of the route was probably the toughest as it required a lot of side hilling and dealing with loose slopes and sometimes heavy brush. When you reach Woods Canyon saddle you will find two trail signs that survived the fire pointed to two different trails which have since disappeared. 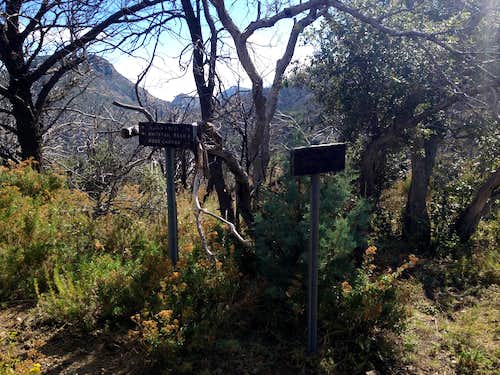 From the saddle you have to hike up the ridge line below the peak going over 3 bumps on the way. Once you reach the top of the ridge line you have to climb a steep and sometimes lose slope aiming for the rock just underneath the actual Cochise Head formation. The goal is to get to the North side of the rock formation were we found a faint use trail. Follow this trail as it initially contours close to the rock and eventually drops down 100 feet or so and eventually leads to a saddle between the nose and the forehead. From that saddle follow an easy ramp to the summit which offers great views in all directions. 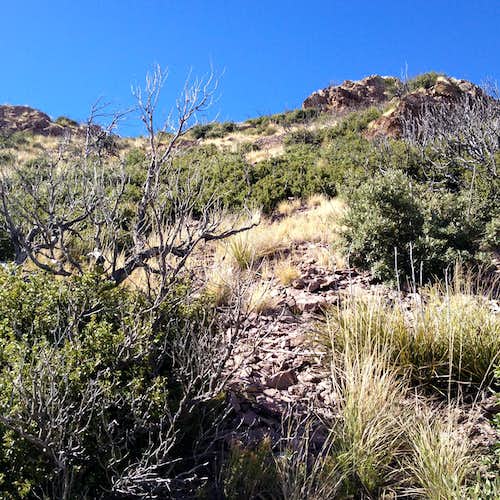 Final ramp from the saddle to the summit

The route as described here does not involve anything beyond class 2.

No Red Tape I am aware of. The hike starts within the Chiricahua National Monument so obey any rules there but the actual peak lies outside the Monument; see map below.

The best time to climb this peak would be spring or fall. Summer could be too hot even at this elevation and one would have to deal with frequent thunderstorms. There can actually be snow at this elevation in winter in the Chiricahuas but chances are it wouldn't linger for too long.

Camping is possible at the nearby Bonita Canyon Campground which is within the Chiricahua National Monument. For more information on the campground click here. There are several lodging options in the nearby town of Willcox, AZ. 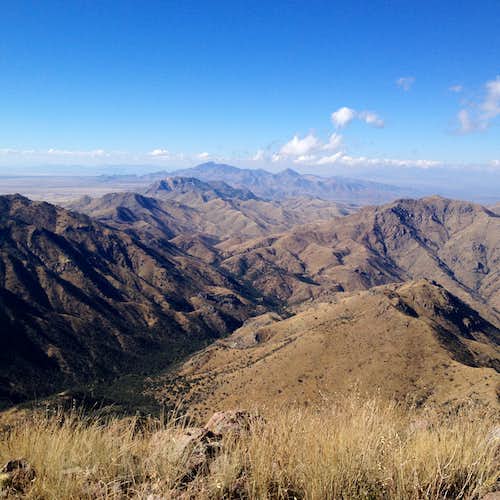 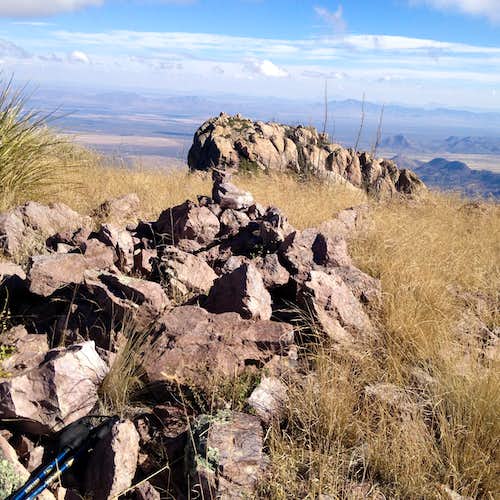 View east with Silver Peak, Portal Peak and New Mexico in the distance