The Chiricahua Mountains are located in southeast Arizona in Cochise County and the summit, Chiricahua Peak, is the highest point of the county and one of just 57 "Ultra" prominent peaks in the lower-48 states, with over 5,000 feet of prominence above the desert floors. The range is a classic 'sky island', containing flora and fauna endemic just to that range. Forests cover much of the range, and a vast network of trails and camping areas offer multitudes of possibilities for hiking, camping and exploring. Numerous peaks above 9,000 feet are found in the range. From a distance, the range has a somewhat uniform appearance to it - Chiricahua Peak isn't reasily visible as it sits amid many other summits just a few hundred feet lower. The range appears more like one gigantic "wall" when viewed from a distance.

The Chiricahua Mountains are the result of a gigantic volcanic eruption called the Turkey Creek Eruption that occured many millions of years ago (approx. 27 million by most sources). The blast sent prodigious amounts of ash into the air. When it settles, it "welds" together to form tuff, which erodes easily into rounded domes and interesting spires. The highest portions of the range are rounded summits while lower down, the range is surrounded by interesting gardens of hoodoos and spires, best exemplified by the Chiricahua National Monument, an area of fascinating rock spires and hoodoos, and well worth a visit. Trails ranging from short nature walks to long loops are available, intermingling with the amazing spires.

The mountains are named after the Chiricahua Apache Indians that lived in the area. The region came into U.S. possession after the 1853 Gadsden Purchase, but the Chiricahuas, led by Chief Cochise, fought the settlers and military off and on for many years, reaching a tenuous peace in ~1872. Cochise himself died in 1874. Much of current-day Cochise County had been formed into an Indian Reservation, but new settlers thought the area could be better put to use, e.g. mining, farming, etc. In any case, tensions once again rose and sporadic battles broke out. Most of the band was relocated to the San Carlos Reservation about 100 miles to the north, but a renegade faction lead by Geronimo fought a guerrilla war during 1882-1886 until he was caught and sent into internal exile. Only then was the region "safe" for outside settlement. 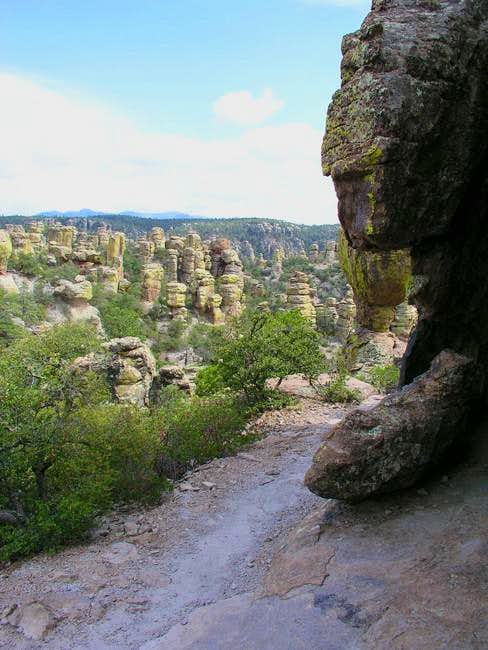 Two possibilities: Rustler Park (north approach): In Willcox on Interstate-10, take exit 340 south through town and continue south and east on AZ-186 which will lead to the monument. But just before the monument entrance, turn right at a signed junction (Pinery Canyon) and then follow a good, if steep, dirt road up into the mountains to the Rustler Park campgrounds. From Willcox the drive is about 35 miles to the start of the dirt road, and another 14 miles to the Rustlers Park campground. From here it's about 6 miles one way to the peak along the Crest Trail (270).

A sub-option at Rustlers Park is to drive another 1.4 miles south along a very rocky road to Long Park, which cuts off nearly 5 miles of r/t hiking and about 1,000 feet of gain. The road requires high clearance and 4wd is recommended. You could also hike this portion as well, then meet the crest trail. Look for an unlocked gate near some FS buildings on the far "left" end of the campground. It's not well-signed, but a map should tell you you're on the right path.

For the Turkey Creek/Mormon Creek approach, leave I-10 at exit 331 and travel south on US-191 to the community of Sunizona. Leave US-191 at AZ-181 and proceed due east through Sunizona. Where AZ-181 makes a hard bend left, stay straight, now on dirt Turkey Creek Road. Travel up this good hardpack/gravel road about 9 miles (roughly). With maps in hand, you have a choice of trailheads. I hiked the peak from Mormon Creek (lower) trailhead, which had a large parking area. Mileage from I-10: about 35.

The roads are mostly passable by passenger vehicles except in the wettest weather.

There are other possibilities to approach this peak as well. Rucker Canyon Road (dirt) leads to campsites from the south, and AZ-80 has access roads allowiong access from the east side.

I know of no special fees other than the normal campsite fees. It was $3 to park at the Rustler Park TH in November 2003, or $10 to camp.

Generally, this peak can be climbed about 9 months of the year. Only after the occasional snow or in the dead of summer should one use caution. I went in February after a month-long dry spell and encountered just patches of snow and ice near the top. Thunderstorms are very common in the summer and this range lies pretty much in the center of the typical monsoon pattern. Hunters are present in Oct-Dec.

Campsites are everywhere in this range and along both approach routes. Rustler Park is the best option for hikes starting from the north on the Crest Trail. There are other sites in Turkey Creek and along Rucker Canyon Road.

Since you're in the area, definitely spend a day in the Chiricahua National Monument. The NM features thousands of eroded tuff spires and hoodoos, similar (but different in origin) to those you would see in Utah at Bryce Canyon. The towers can be a hundred+ feet tall, and look like they're going to topple over in a breeze. Fortunately they do not.

The Downed Trees Are Gone!

The Forest Service has done a superb job in removing the deadfall that blocked so many of the trails, especially the final spur to the summit. Still a few downed trunks here and there but way less than before. Kudos!

There are many routes up/down this mountain. I don't know which is best, but I can tell you the best views I found were on the Crest Trail south of the peak. The background picture on this page show the rock formations that I believe are found in Chiricahua National Monument. To my knowledge none of these are visible on any standard route up Chiricahua Peak. Please correct me if I'm mistaken. See my trip report on PeakBagger: https://peakbagger.com/climber/ascent.aspx?aid=1279987