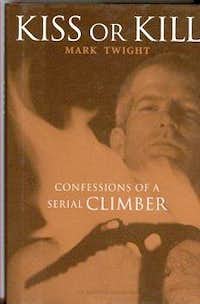 Mark Twight is one of America's leading alpinists. His gripping accounts have been published around the world,

Translated into five languages. Sports Illustrated, Outside Magazine, Rock & Ice (and a host of European magazines) have profiled him. Twight was the first to solo the "Czech Route" on Peak Communism, and fastest to solo "Slipstream," a three thousand-foot-high waterfall in the Canadian Rockies (in two hours and four minutes; most parties take twelve hours). He made the first ascent of "Deprivation" on Alaska's Mount Hunter, climbed five extremely difficult new routes in the French Alps, and made a non-stop, sixty-hour ascent of Mount McKinley's "Czech Direct" (the previous fastest party took seven days). Twight works as a technical advisor for Patagonia and distributes Grivel ice climbing gear in North America. He develops cold-weather clothing systems for the Department of Defense and teaches climbing and crisis nutrition to U.S. Special Forces operatives. Home is wherever his wife, Lisa, and an 85-pound Akita named Zuma happen to be, which is in Utah for now.

Twight is the author, with Jim Martin, of the award-winning book Extreme Alpinism: Climbing Light, Fast, and High.

My summary: Twight compiles over a dozen stories published as articles over the years, restoring them to their pre-edit versions and adding an authors note providing some context and follow-up. A haunting series of stories, this book should make every mountaineer stop and think what it is that they are seeking in the mountains, what they are willing to risk.

From Publishers Weekly
"From Chamonix to the Himalayas to Peak Communism in the Pamirs, extreme climbing has been Twight's response to "stupidity and mediocrity" and at times it is even "a tool to forestall suicide." Following Extreme Alpinism, this volume collects more than 12 years of Twight's extreme outdoor journalism for such magazines as Climbing, Outside and Men's Journal. Punk rock lyrics pepper these essays, providing context and form for his rage, cynicism and obsessive, masculine drive. Avalanches, rotten ice, the deaths of fellow climbers, the rescue of others, dwindling food supplies, lost tents at 18,000 feet Twight survives mortal dangers and tragedies, writing, "No matter what I did, the suffering I experienced did not satisfy me. I had to have more." Twight's in-your-face style is both his strength and his weakness fans of Henry Rollins or Charles Bukowski may find a sport nut analogue in Twight. Deeply personal, arrogant, grandiose, thrilling and unapologetic, this record of his 15-year career will gratify and repel extreme athletes, their admirers and their detractors. 40 b&w photos not seen by PW."

Haunting, but inspiring
This book is full of dichotomies, and my feelings about it are too. On the one hand, I was terrified by the stories, by the tales of lost and suffering. On the other, I dream of achieving that level of exposure, that degree of confidence and ability. Worst, or best, I see in Mark's writing a similar burning for action and disdain for failure, rejection of sloth and laziness.

Whatever you think of Twight and Dr. Doom, this book is a must for anyone with aspirations of understanding the mountains and those who live for them.