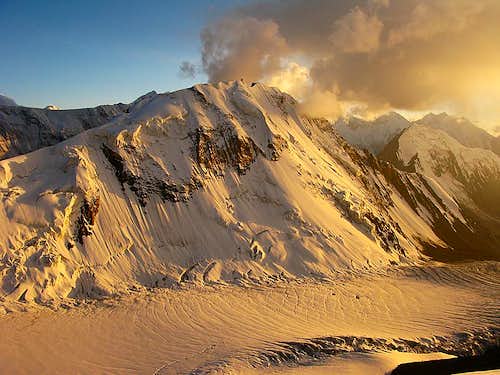 The Pamirs is a big mountain group in Central Asia, covering large parts of Tajikistan and Kyrgyzstan where a majority of the higher peaks are situated. The range extends to Uzbekistan, Afghanistan and China. The range is very diverse and any kind of mountaineer and trekker can find something of interest here. The high alpine peaks attracts world class mountaineers from all over the world. Aksu and some other rock peaks are considered a test equal to for example Trango Towers and Pik Karla Marksa, Pik Tajikistan and Pik Engels in the Shakdhara Range have some of the hardest mixed routes you can find. Pleasent trekking and scrambling can be found all over the Pamirs.

Back in the times of the Soviet Union the peaks of the Pamirs were popular with climbers from countries of the "old Eastern block". The region has now gained a lot of popularity after the stabilization of the political situation in central Asia and because of the lack of high permit fees (100 $US at most).

The Pamirs are sometimes refered to as the "knot" or the axis, as from the Pamirs other mountain ranges extend - the Pamiro Alai and Fan Mountains to the west, the Tien Shan to the north-east, the and Kunlun Shan to the east, the Karakoram to the south-east, and the Hindukush to the south.
The range is a result of the collision Indian-Eurasia. The deformation caused by that spread into the interior of Eurasia (Central Asia, Tibet, e.g.), causing the uplifting of major 7000 m+ ranges such as the Pamirs, Karakoram, Himalayas, Kunlun Shan, Tien Shan and Hindukush. Associated with this process and the related fault systems are massive earthquakes in the region.

Some include the Kongur Shan (Kongur Tagh, Kongur Tiube etc), Muztagh Ata Shan (Muztagh Ata, Koskulak etc. and Chakragil/Karabekter/Kingata Shan as a sub group to the Pamirs. They are all separate sub systems to a larger system and the most correct is probably to sort them all under Pamir. As I have gotten the impression most people search for these peaks under Kunlun, I have chosen to include them all on that page instead of this one.

The name of Pik Kommunizma is still a very hot debate in Tajikistan. It has become political issue of ethnical importance. Garmo vs. Ismail Somoni (also Ismoil Somoni). The Tajik population wants IS, but many others want Garmo. Most still say Kommunizma because it doesn't imply any ethnical issues, even if K brings back memories not everyone likes. The name battle will go on.

Hi! I chose to name it "Pik Ismoil Somoni/Pik Kommunizma" to have both names used equally. For me Pik Garmo is a seperate peak (once thought to be the same peak as Pik IS/Kommunizma) of 6602 m elevation south of Pik IS/Kommunizma.

What are these peaks?

Have added a photo I took in Pakistan of the peaks I saw immediately north of the Wakhan coridor. No idea of their names. Maybe you know? You can delete the photo from the page if you don't want it! Lee

Re: What are these peaks?

I have no clue of the names of those peaks. The shapes are not familiar either. There are so many peaks around there and somehow I tend to look for the bigger ones and the smaller ones just "drown" amongst the others and are not remembered. I guess we can find the names of some of them, if we have the accurate position of the place from where you shot the photo. The photo will stay on the Pamir page. I like it.