Gora Kurumdy or Kurumdy I is a 6614m high Mountain in the Transalai Range, Zaalaisky Ridge in the Pamir.
East of Pik Lenin.

Due to the difficulties it is very seldom attempted and has only few ascents.

The closest place to stay and to get basic supplies is Sari Tash - don't expect too much but a perfect view over a wide green meadow with an amazing mountain range behind it. Lots of cyclists are stopping here.
Sari Mogul is not far but more useful if your target is Pik Lenin or a peak in the western Transalai Range.

From Kyrgyzstan side: by Air to Osh and Taxi to Sari Tash. Then with horses to the basecamp on the western banks of the East Kyzilsy Glacier. This approach is fairly easy and some agencies are willing to help. Even they might tell that the only possibility to reach the basecamp is by helicopter - complete nonsens - BC is good 2 hours from the road by foot.


From Tadjikistan the valley to walk in is very long and since the border was changed in 2011 visitors might need a chinese permit now.

There is a rumor of a first ascent in 1932 from the south side by Timashev and team.
But it is not sure if they were on the main summit. I would need the original expedition report or the Soviet Root book to verify that. Any help on this is welcome!
The entry in the AAJ might come from a misinterpretation of a list entry of Yevgeniy Gippenreiter and Vladimir Shataev in the Alpine Journal 1996 page 126 which relates to Kurumdy West but without altitude. Jozef Hala states:
QULLAI KURUMDY SW II (crest], 6154, CA, Tmu, 1932, RU Nikolay V.Krylenko,
10, (guess only), 1. Yeveniy V. Timashev and companions (RU)

A first ascent from the north side was done in fall 2001 by a major north ridge east of the main summit by Michael Mihajlov and Vitaliy Akimov.

The first traverse and second ascent of Kurumdy (6614m) in 2015 needed 15 days traversing several 6000m peaks on the ridge. (Markus Gschwendt and Katharina Pfnaisl from Austria). 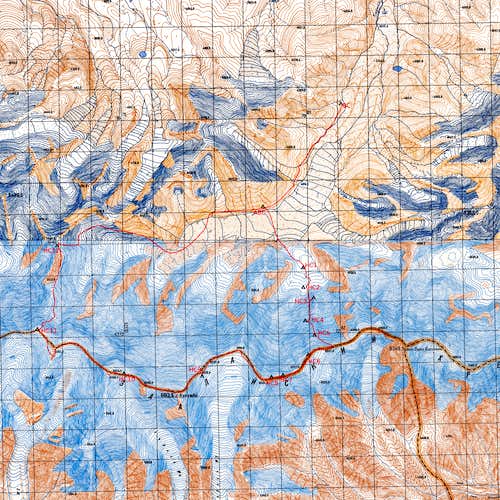 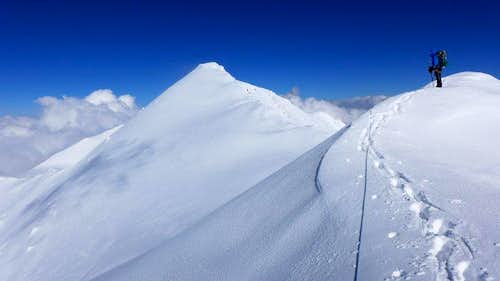 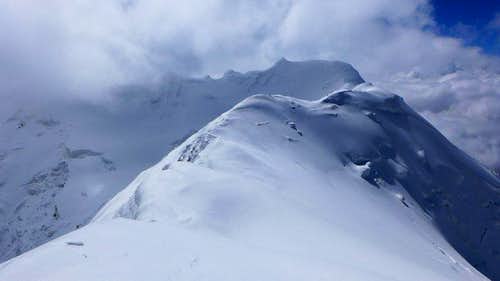 "We climbed a steep face (~48°) between Zarya Vostoka and the Kurumdy East II summit to join the ridge at  6000m. From Pik Chorku (6283m) we descended over a north ridge to a 5440m summit (which we had already climbed in beginning for acclimatisation) and returned to ABC (4100m)/BC (3770m). Because of bad weather and changing snow conditions the whole traverse (BC-BC) took us 7 days more than planned - luckily we had enough gas and food."

The traverse has almost no emergency exits.

Other summits of the Kurumdy Ridge

First ascent and first traverse (east-north?) in 2000 by Alexander Novik and Natalya Zotova.

A minor peak east of Kurumdy East. First climbed (east-west) during the first Kurumdy traverse in 2015 by Markus Gschwendt and Katharina Pfnaisl. (It was Kathi's first 6000m peak).

2009 Jan Dolezal and Tomas Ehler reached the 6384m summit of Kurumdy East I by climbing the north ridge like the first ascent team of the main summit in 2001.

First ascent in 2000 by Alexander Novik and Natalya Zotova.

2015: traverse from east by Markus Gschwendt and Katharina Pfnaisl. They got down for some meters the south ridge then traversed north and followed the northwest ridge.

Best option to climb this is to do the traverse of the summit range. The minor north summit 6554m was first climbed from east during the first Kurumdy traverse in 2015 by Markus Gschwendt and Katharina Pfnaisl. The 6558m summit was not climbed that time because of very bad fog and when the sky cleared a little the team escaped down the west side.

First ascent  in 2000 via the northwest ridge by a Russian-British team.

Via the east ridge (which was climbed from north) Markus Gschwendt, Katharina Pfnaisl, James Lam reached the summit as an acclimatisation peak 2015. And again on the descent after the traverse of Kurumdy.

David Taura and Albert Falcó did the first ascent in in 2007 from southeast using a snow couloir .

During a 2015 Expedition this summit was visited by a similar route starting further left of the couloir because of  rock fall: Markus Gschwendt, Katharina Pfnaisl, Melanie Grünwald, James Lam. Some days later other austrian teams summited too.

On most maps the Chinese-Tadjik border is drawn from Zarya Vostoka leading south. This is not true anymore since 2011. The three state summit is now Kurumdy I 6614m.

Some agencies offer the main summit of Kurumdy in their program. I think this is very stupid because the chance of success for a guided team is more or less zero.

All successful climbs were done in summer or fall.

Because of the very steep faces all routes are endangered by avalanges during winter and spring and to rockfall later on.

We know about a swiss team who tried in April 2015 with snowboards but they retreated because of the new snow and avalange risk. 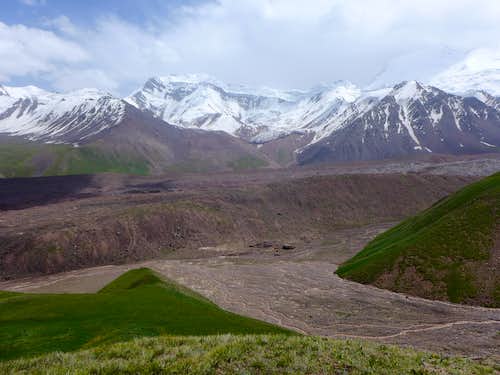 Kurumdy Expedition 2015
Basecamp on the northern side is placed best behind the west moraine of the East Kyzilsy Glacier at 3770m and can be reached with horses. Fresh water can be a problem sometimes.
There is a more green place with a water stream 20 minutes below.


The ABC can be established at a small lake around 4050m or further up at at 4100m. This place is perfect to climb some 4000m and 5000m peaks for acclimatisation and to start crossing the glacier towards Kurumdy.
For Golova Orla and Ekishak its possible to set camp on another meadow further up.

UK Alpine Journal, 1996, Yevgeniy Gippenreiter and Vladimir Shataev, Six and Seventhousanders of the Tien Shan and the Pamirs